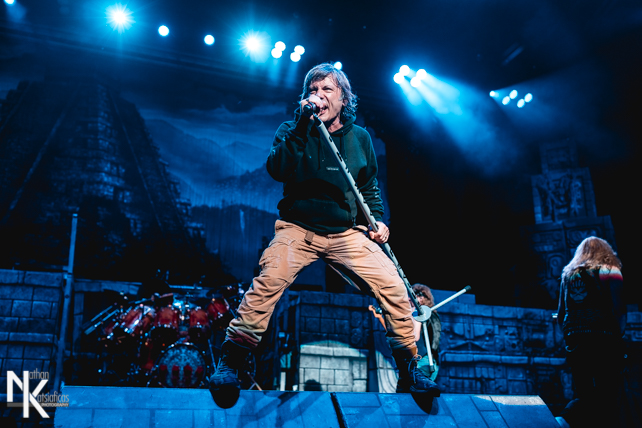 On Saturday (25), Iron Maiden played their 117th and last show on the Book of Souls world tour at Brooklyn’s Barclays Center. Having been at two of their shows this week (the first of their two night run in BK on Friday (21) and two days earlier in Mansfield, where Nathan Katsiaficas‘ photos come from), if the band was fatigued and going through the motions, they sure as hell didn’t show it. In fact, wrapping up a tour in support of their 16th album 42 years after they formed, Iron Maiden are an elite band that musicians of any genre should aspire to. Having witnessed them both towards the beginning of the tour (last year at Madison Square Garden) and this past week, here’s why:

The Book of Souls, Maiden’s first double album of their career, came out in 2015 to pretty much universal acclaim in September of 2015. However, it was supposed to be released earlier than that. Bruce Dickinson had a throat cancer scare that stopped progress, and the band put the brakes on finishing up the album while he got treatment for it. Turns out that as much of a renaissance man as Dickinson is, he can now add “beating cancer” to his list of accomplishments. Six months after the album was released, the band kicked off the tour in Florida.

Maiden’s stock remains high as one of the best live bands currently playing. Anyone that’s seen them will want to go again, and it’s become a rite of passage for fans and their kids. Even if you’re not on board with the band’s set list (more on that later), you know you’re going to see a great stage show. While that’s obviously due to the people making the music, the set design would impress even a non-Maiden fan. While tailored around the Mayan vibe of Book of Souls, there’s still a larger than life version of the band’s mascot, Eddie, running around the stage. He’s represented as a gigantic inflatable head as well. There’s tons of pyro, smoke, a baphomet and even Dickinson in a wrestler’s mask with a heart that squirts blood. And of course there’s the British flag-waving pageantry of their standby hit, “The Trooper.” Which brings us to…

The band are still amazing live

Remember a few years ago when Motley Crue decided to all it a day? There was a reason for that, and it rhymes with “prince meal.” You’ll find no quality decline in the music or athleticism of Maiden. Dickinson will turn 59 in a few weeks, but he commands the stage like someone 40 years younger. Commanding the stage, jumping, doing microphone tricks, and still hitting high notes is something that many couldn’t still do, but he nails it. Drummer Nicko McBrain is 65! You wouldn’t know that from listening to him play, either.They’ve got the energy and vitality that they had back in ’82 when Dickinson joined the band.

With 16 albums to choose from, it’s a given that you’re not going to hear all your favorite tracks from Maiden. That’s compounded by the fact that a) they write long songs and b) they generally devote a lot more time to whatever album they’re promoting while on tour. So yes, that means that half the band’s set list on this tour has consisted of  Book of Souls material. Optimal? Perhaps not, but it’s a solid album that sounds enough like some of their older songs that you’re not going to lose much interest in the show, even if it is a song you’re not familiar with. It’s a testament to their popularity that they essentially write songs that sound like soccer anthems (you can get chills listening to 20,000 singing the wordless melody of the intro to “Fear of the Dark”).

The set list hasn’t changed much since the first show and the last. Sure, a legal dispute has kept the band from playing “Hallowed be thy Name,” the third-most played song in their history, but in addition to getting seven songs from the new album, you also get “The Trooper,” “Run to the Hills” and of course “Iron Maiden.” That’s almost worth the price of admission right there. And you know what probably keeps the band excited? Playing new material. They’re proud of their albums, even if you might not like the newer stuff as much as the 35 year-old material, they’ve earned the right to play whatever they want. They’re still writing albums, and would probably much rather play some stuff from their current albums than trotting out the same set list year after year like many bands do.

You can’t win ’em all! Adrian Smith’s replacement when the guitarist left in 1990, Maiden kept him around when he rejoined the band nine years later. While he gives the band a three-guitar attack, it’s questionable whether his guitar is plugged in half the time. Wearing white high-top sneakers and throwing his guitar around like he’s in a Sunset Strip band circa ’84, even Dickinson knows what fans think of him, mock-smothering him with his shirt while he plays a solo. However, when you see him do stuff like tap unwitting security guards on the shoulder to have them turn around and realize the guitarist of the band, mischievously grinning, has decided to have some fun with them, it makes it apparent why he’s stuck around in the band for so long.

Anyone that saw Maiden on this tour witnessed a part of history. This tour is over. Maybe next year or the year after, they’ll do a retro tour like the Somewhere Back in Time tour they did seven years ago in between albums. They could be working on a new album, but lately they’ve been putting an album out every four years, so we’re looking at another new album in maybe 2019? That seems a long ways away, but by the time they’re touring for that, Nicko will be pushing 70. It’d be hard to imagine the band touring ten years from now. That being said, there’s still simply no weak link in the band, and they’ll sell out stadiums until they retire. Seeing Iron Maiden play live is like seeing a Broadway show with the best actors in the business. They’re truly still at the top of their game, and everyone that still gets to see them should jump at the chance.