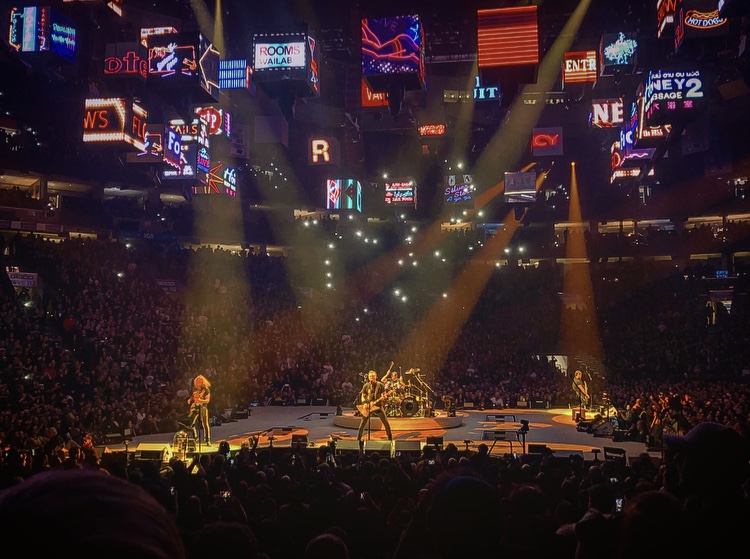 Metallica brought the second leg of their massively successful WorldWired Tour to Philadelphia’s Wells Fargo Center last Thursday (25th), and proved that despite being unapologetically imperfect, they are still perfectly Metallica.

I had the pleasure of seeing all three NYC-area WorldWired shows last year, including the intimate show at the now shuttered Webster Hall. Musically, I can’t say the Philly show was as tight as any of those Leg 1 shows, but with a few updates to the production and a couple of rarities on the setlist, Metallica proved how deeply they still care about entertaining their fans.

The biggest difference I felt between Leg 1 and 2 was the addition of metal-comedian Jim Breuer as the opening act. Metallica have always made it a point to bring young, working metal bands out on the road – Volbeat, Machine Head, Lamb of God, The Sword, Mastodon, System of a Down, and Gojira – have all gotten significant boosts touring with Metallica, a fact that will not be forgotten in their lasting legacy. For this 24-year-old, who first saw Metallica on the World Magnetic tour, having a couple of sweet modern bands butter me up is a part of the show I always took for granted. The last time I’d seen Jim Breuer was at Metallica’s Orion: Music & More festival in New Jersey back in 2012, where he performed in the comedy tent, backed by a three-piece band. His set (if you can call it a set), consisted more of crowd work and half-baked audience participation games. At a particularly painful moment in one of these games, an audience member threw a beer on stage at one of the exasperated contestants, to which Breuer responded by pointing the guy out on the Jumbotron and gleefully announcing, “I’m gonna have you thrown out” and instructing two nearby security guards to escort him out of the venue. Yes, if you throw drinks on stage at any event, you’re asking to get tossed out, but the smug enthusiasm with which Breuer punished this guy made me empathize with him a little. I don’t condone drink-throwing of any kind, but given what we were watching, I certainly understood the impulse.

Breuer’s set ended with a karaoke-style singalong to several metal classics, with the lyrics up on the screen. A personal highlight was Breuer asking the audience, “Do we have any hardcore fans here tonight?!” and then queuing up Pantera’s “Walk.” Overall, Breuer’s presence signaled to me that this was a show for the normies. That is in no way a knock against Metallica or their management, but a realization that at this point in their career, they seem more interested in embracing their casual fanbase than trying to appeal to devoted metal fans.

After this significant preamble, Metallica finally hit the stage and blistered through the first two tracks of their newest offering Hardwired…To Self-Destruct, followed by their traditional closing number, “Seek & Destroy.”

It was clear from the get-go that this would be one of those shows that Lars consistently rushes through. It’s become almost cliché to talk smack about Lars Ulrich’s drumming, but I do have to mention it. Throughout the entire show Ulrich was pushing the tempo more than I’ve ever seen. It was most obvious during crowd favorite “Master of Puppets”, when after every cymbal clamp (“Master! Master!”) Ulrich would come in almost an eighth-note early. I mention this as someone who habitually defends Ulrich’s drumming as integral to the spirit of the band – but I have to admit, it did bother me this time. All Metallica die-hards must make peace with the fact that Ulrich is an imperfect drummer. That in itself is not necessarily a hindrance, and in fact it could actually be considered an asset. So many rock and metal bands after thirty plus years together decide to lean on arena-rock crutches like Autotune, sample replacement, or singers behind the curtain, but not Metallica. They have always erred on the side of authenticity, for better or for worse. Given the spectacular production of the WorldWired show (explosions, video, moving set pieces), I assumed they would play to a click track, but given Ulrich’s tenuous relationship with the tempo I frankly find that hard to believe. Thirty-seven years into their career, Metallica are no doubt aware that they could “perfect” their live performance in any number of ways but have instead chosen to go it au naturel, at least as far as the music is concerned.

The sleeper highlight of the show was a bust-out of “The Day That Never Comes,” off of 2008’s Death Magnetic (not played since February). The shred-heavy middle section was executed flawlessly on all fronts – a stark contrast from (its apparent inspiration?) the middle section of “One,” which was uncomfortably sloppy.

The band pushed on through two more new songs, “Now That We’re Dead,” “Moth Into Flame,” as well as live staples, “Creeping Death,” “For Whom The Bell Tolls,” and the first performance of 1983’s “Phantom Lord,” in five years. Musically, the rest of the show was fairly unremarkable, save for the Northeast U.S. debut of modern fan-favorite thrasher, “Spit Out The Bone.” This lived up to the hype and should frankly remain on the setlist permanently, if only to remind the band that they still have enough rocketsauce to write a thrash anthem.

Almost more so than the music, the production of this show stuck out to me. I had heard Metallica were experimenting with drones, sure enough during “Moth Into Flame” about twenty-five drones, meant to look like fireflies, emerged from a hole in the floor and flew in various formations throughout the song. At one point the cube-screens dangling over the stage cycled through various fan-drawn pictures of the band. After about an hour of compulsively deep Lars-listening, I saw this and wondered if maybe all that music nerd stuff doesn’t matter to most folks. This was a band literally wrapping themselves in their fans’ affection – filling in the cracks with love from their most devoted supporters. Whatever you think of Metallica’s music, it is impossible not to acknowledge the great lengths they have gone to embrace to their fans. From charity work through their foundation, All Within My Hands, and the extensive VIP packages which benefit it, to James Hetfield’s back-and-forth exchanges with children in the audience, Metallica always make it a point to give back to their fans.

When analyzing any band approaching its fourth decade, the significance of its legacy cannot be overstated. Like a US president riding out the last years of a second term, or a high school senior trying not to screw up that last semester, Metallica is trying to cement a legacy worth retiring for, even if they miss a few notes along the way. Metallica, as a cultural object in 2018, seem a step closer to Springsteen than Slayer. After the show, all four band members thanked the “Metallica family” profusely and proclaimed that they are “just getting started.” Metallica may not be at the top of their game, but they are still on top of THE game. Not quite thrash-kings, but kings nonetheless.