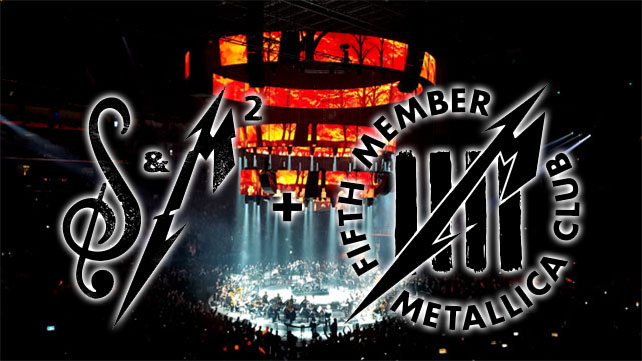 Metallica’s first concert with the San Francisco Orchestra ran for two nights on April 21st and 22nd, 1999 at the Berkeley Community Theatre. During this historical performance that took place twenty years ago, these legends performed twenty Metallica tracks including the world premiere of “No Leaf Clover” and “-Human.” Other songs consisted of two tracks from Ride The Lightning, three songs from Master of Puppets, one from …And Justice For All, five from “the Black album,” four from Load, and three from ReLoad. Since the first event, Metallica have released 2003’s St. Anger, 2008’s Death Magnetic, and 2016’s Hardwired…To Self-Destruct. Many have treasured this event for years as they called it an unofficial Metallica “Greatest Hits.”

Many jaws were dropped when Metallica made the official announcement for the twentieth-anniversary show being reunited with the San Francisco Symphony two decades later. The S&M2 event was a must-attend for all die-hard fans. Unfortunately, due to thousands of tickets being beat by bots, not everyone had a chance to see this historic reunion. However, many Metallica fans did find a way through the alleged ticket scam and traveled from all over the world to attend on September 6th and 8th, 2019 for the grand opening of the Chase Center in San Francisco, CA. Some die-hard fans also sold their car, missed a handful of shows, and made a full experience: one to treasure for the rest of their life. While the first night consisted of a lot of media reps, we were there for the event made exclusively for fifth members (Metallica fan club) on September 8th.

After months building the Chase Center, the brand new home for the Golden State Warriors of the NBA, San Francisco locals didn’t seem too thrilled. The venue is currently being tested out by holding massive concerts to see how traffic will be handled including expensive late-night Lyft/Uber rides. While the iconic show is made to take place in Metallica’s Bay Area, some locals were confused by the sea of metalheads. However, that didn’t stop us.

While the show was scheduled to kick-off at 8:00 PM, fans were lined up at around noon waiting for the outside merchandise booth. Despite Metallica having a “skip the line” pre-order available on their website, that didn’t stop devoted fans from getting merch the traditional way.

One of the best parts of seeing Metallica is talking to other Metallica fans before the show. After everyone we spoke to, we haven’t seen any locals who attended. While we assume there were some there, we mainly spoke to people from all different parts of the world as a few lucky fans were lucky to witness both nights.

We were reminded of how Metallica has one of the best branding when it comes to merchandise. They make each show unique as we’ve seen fans wearing Metallica shirts that ranged from all parts of their career, including 1999’s S&M concert shirt. Other shirts included the MetClub T-shirts when fans had to pay $50 a year to receive physical items from their heroes. Many fans honored the late Cliff Burton, a few rocked out the Big Four shirts, and many were decked out in their 2009/2010 World Magnetic tour as well as 2017/2018 WorldWired tour. The Metallica attire went on and on. However, there were a few wearing Megadeth shirts.

Once fans received their merch (which items sold out fast outside), many concert goers were standing outside waiting for the doors to open. Others walked to the nearby food truck/beer area to have a few drinks to kill some time.

Everything was new and as expected, expensive. It was evident that it was a new venue. The staff didn’t seem fully prepared to handle so many metalheads in one sitting. There was a point it looked as though the cleaning staff decided to mop the women’s bathroom during intermission, which made absolutely no sense. Some of these mops landed on a woman’s foot. Blocking the area was also questionable. However, aside from the slight hiccup, everything else was pretty smooth. The venue itself had lots of legroom between seats. There was a decent area for food and drinks as the navigation was self-explanatory.

The sold-out show was packed, but there were many empty seats. You could have fit at least 100-500 more people (if not more). This was the most disappointing thing to see since it’s an event best to witness live inside the venue. There’s a different feel to see it live than when it hits movie theaters on October 9th. Metallica said it themselves, S&M2 was indeed a “must-see celebration.” The group performed with the Symphony as legendary conductor Michael Tilson Thomas lead a portion of the show, which also marked his final season in San Francisco.

For those who’ve seen Metallica live indoors before would be familiar with the circular stage setup. There’s the rotation drums for Lars Ulrich as James Hetfield, Kirk Hammett, and Rob Trujillo had areas to move around the platform. Essentially, no one had a bad seat in the house. The Symphony was arranged in a circle, which also gave fans a chance to see the entire setup. Additionally, monitors were displayed on top of the stage, which had more of a circular spiral shape. The monitors either showed a unique image for each song or live snippets of the band playing.

The evening began exactly how 1999 started with “The Ecstasy of Gold” and “The Call of Ktulu.” After years of listening to the original S&M Symphony album, there wasn’t anything like hearing their iconic intro followed by the Ride The Lightning instrumental back to back live. This marked the initial “best time of my life” feeling. There was an overstimulating amount of emotion while watching and a moment that one wanted to share to all instantly. It spoke more than any Metallica show one has ever seen in their lifetime. It was indeed a celebration of the band’s entire career, as well as commemorating their twentieth anniversary with the San Francisco Symphony.

While Kirk Hammett and Rob Trujillo didn’t have a chance for their infamous doodles, they did take a moment to have a goof. Aside from that, the show poured out a significant amount of elegance, class as well as the band honoring the Symphony and vice versa. The entire first act was more on the heavier side as they performed an appropriate mix between Ride the Lightning, Load, Reload, Death Magnetic, Hardwired…To Self-Destruct, and honoring the 1999 show with “No Leaf Clover.” It was a very attentive set, and all members were on point, including guitarist Kirk Hammett. You could tell the band and Symphony have spent quite a few rehearsals in preparation for night two, the evening for the real Metallica fans.

The set drastically changed after the twenty-five-minute intermission. It began with Lars Ulrich thanking the fans from all over the world to attend night two of S&M2, which was made exclusively to the fan club. Ulrich then introduced the Symphony as he said, “we’ll be back here in five.” The first half of the second act felt more like an homage to the Symphony, something that the band arguably should have done in the first place back in 1999. Sadly, a significant amount of concertgoers didn’t seem to have the attention span for this moment. There were points it was hard to hear the performance due to the constant chatter. The second act started with just the Symphony with Michael Tilson Thomas conducting on “Scythian Suite, Op.20, Second Movement,” a Sergei Sergeyevich Prokofiev cover. Instead of the Symphony joining in on a Metallica song, the group walked on stage to join the Symphony covering a piece by Russian composer Alexander Mosolov, “Iron Foundry.” This particular cover was heavy to the point that you didn’t want it to end.

One of the biggest surprises of the night was hearing James Hetfield sing behind the entire Symphony for a stunning version of “Unforgiven III.” This rendition of the song was unexpected. At one point, you were expecting the rest of the band to appear on stage to finish out the track. However, it was solely James’ voice and the Symphony. It’s a version you want to hear on record and film. Metallica brilliantly selected the setlist as they were able to sneak something from St. Anger in with “All Within My Hands.” However, it was a smart move as the band has an entire foundation named after the song. It was well played, especially for the crowd who were more familiar with the black era and earlier (not everyone though). The ultimate highlight of the night was when James Hetfield mentioned to the audience how the band has never forgotten the late Cliff Burton. Hetfield then introduced Scott Pingel, principal bassist of the San Francisco Symphony to the stage. Pingel honored Burton by performing an incredible bass solo to “(Anesthesia) Pulling Teeth.” Pingel’s stunning version of the song was a great honor to Burton as it also closed out the lighter portion of the show.

The second half of the second act went back to more of a classic Metallica concert but of course, mixed in with the Symphony. The crowd grew much louder during “Wherever I May Roam,” which turned into “One,” followed by “Master of Puppets.” Fans raised the light of their phones during “Nothing Else Matters,” as couples embraced the moment by swaying back and forth together. The night officially concluded with “Enter Sandman.”

In total, the band performed twenty songs and have brilliantly fit at least one song throughout each album (minus the Garage days). One could say, S&M2 will be the next generation’s Metallica’s unofficial “Greatest Hits.”

Metallica managed to perform at least one song from their entire discography: one from Kill ‘Em All, two from Ride the Lightning, one from Master of Puppets, one from …And Justice For All, three from “the black album,” one from Load, one from Reload, one from St. Anger, two from Death Magnetic, and three from Hardwired…To Self-Destruct.

While this is probably the most extensive review I’ve personally written for a single show, I most likely left a lot out. There was an incredible amount to digest. I hate to say this due to the many who couldn’t make it out; this was the best Metallica concert I’ve ever experienced. It spoke on a different level than anything else I’ve personally seen from Metallica, and I’ve seen these legends quite a few times. Metallica has such a diverse set of fans that they can never please everyone with “the perfect setlist.” I do think they should have “Atlas Rise” replace “Moth Into Flame,” and snuck in at least “Fade To Black.” I believe they had time for at least one more song since they had twenty full songs back in 1999. Or maybe, they should return for S&M3 for the ultimate Metallica consisting of a ten-night-event with their entire discography. One can dream, right?

All hopes and jokes aside, S&M2 was well worth the travel, finding ways to afford the trip, and to be in that crowd whether on the floor seat or in the nosebleed section. It was a once-in-a-lifetime show, one that I will never forget. I’m ready to experience this all over again in theaters next month.

“The Ecstasy of Gold”

“The Call of Ktulu”

“For Whom the Bell Tolls”

“The Day That Never Comes”

“All Within My Hands”

“Wherever I May Roam” 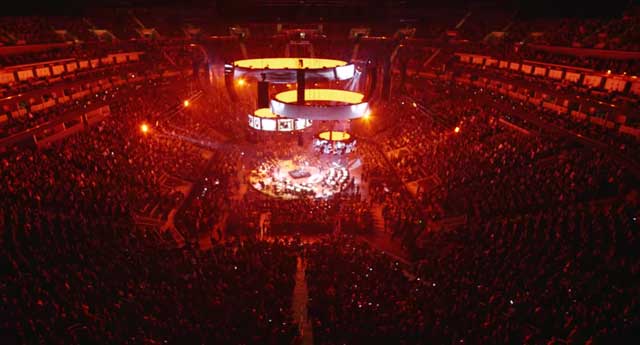