This past weekend, Lamb of God performed their new self-titled record in its entirety for all to see. This is a new territory for the band as they have never played a full album live before. The group played the songs in tracklist order and even performed a four-song encore. As someone who hasn’t attended a live performance for quite some time, these livestreams are substantial and a throwback to normality. The Virginian metallers originally posted live quarantine videos back in June, where they performed in their respective homes. Still, now Lamb of God took it to the next level with a full-stage production.

Kicking off the set was the fan-favorite “Memento Mori,” where frontman Randy Blythe’s eerie vocals set the show’s tone. The anticipation continued to grow, waiting for the inevitable crushing entrance of the full band with Randy belting out, “Wake up!” From then on, you know you’re in for a good time as they captivate you with their crisp audio mix and engaging visuals. Each member played and sounded great and put on a polished performance. Not having fans in the audience seemed to have minimal impact on the band’s performance. It must be hard to go all out for 14 songs with no crowd interaction to feed off, but the guys got it done.

The filming of the show was well done. The up-close and personal angles of both Willie Adler and Mark Morton’s fierce picking had vast detail. They honed in on the intricacies of the riffs, especially during Mark’s solo in “Ruin.” You were able to see the riff beast at work. The song I was looking forward to the most was “Resurrection Man” due to the disgusting heavy breakdown and alarming panic riffs. The song sounded great and made me want to experience it live more than ever. My only critique of the track was when Randy did not hold out the scream for the “Six Feet Down” section, but given that they were half-way through their set, I understand. Including the new Bill & Ted Face The Music song, “The Death of Us” was a nice touch because we probably won’t be seeing that in future Lamb of God sets.

Overall, this was a fantastic Livestream event, and Lamb of God fully delivered a quality performance. Given this show’s success, I am eagerly awaiting next week’s event where they will play Ashes of the Wake in its entirety for the first time ever.

Grab your tickets here if you haven’t already, and while you’re at it, snag Lamb of God’s self-titled record here!

Below is the Setlist:

The Death of Us (Bill & Ted Soundtrack) 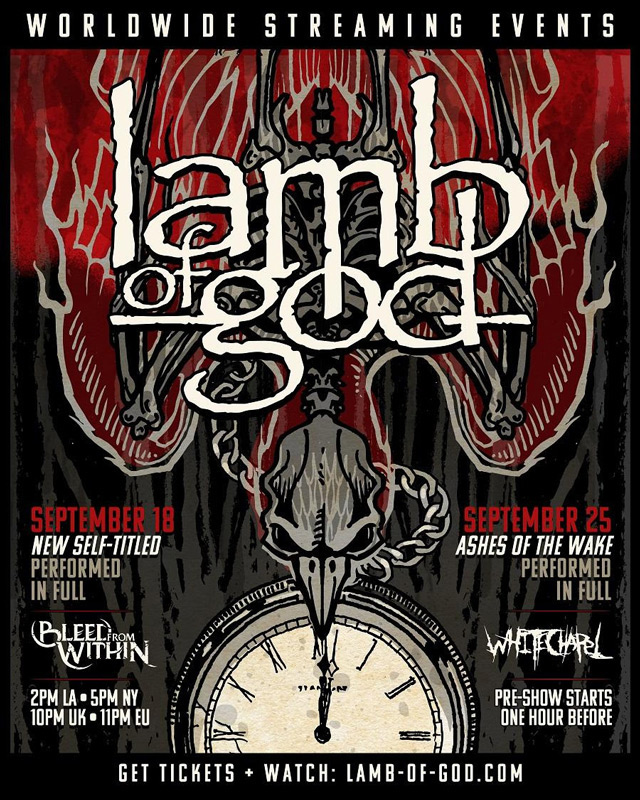