The Twisted Sister frontman is no stranger to Broadway, having performed in Rock Of Ages onstage back in 2010. Still, the last thing you’d expect to hear Dee Snider singing are songs like “Big Spender” or “Luck Be A Lady.” Yet that’s exactly what he did with Dee Does Broadway, an album full of Broadway covers sung by Snider himself.

Of course, there have been some great rock operas/ musicals to grace Broadway. However, Snider purposefully chose not to sing songs from a few obvious titles, saying:

“Over the past year I have worked closely with my team and collaborators picking from decades of musical hits with only two rules: The song had to speak to me as a singer on some level, and it could not be a rock song to begin with. No Jesus Christ Superstar, Grease, Hair, Rent, Rocky Horror, etc.  What would be the challenge in that? There are many who think doing an album of rocked out show tunes is pure insanity on my part. Apparently, they haven’t seen any photos of me from the 70’s and 80’s.  Could I have been in a more theatrical band? Ever since I was a kid, I’d heard the real power inherent in a lot of songs from musicals and this record gives me the chance to show it.”

Dee Does Broadway features Snider singing songs from musicals like Cabaret, Chicago, West Side Story, South Pacific, Guys And Dolls and many others. As if that wasn’t odd enough, though, the album also features guest appearances from the likes of Cyndi Lauper, Clay Aiken, Bebe Neuwirth, Patti LuPone, and many others. While we can’t blame Snider for doing something he’s always wanted to do, it’s still a little hard to imagine him in the studio recording rock versions of musical hits. Then again, we’ve gotten use to the idea of Twisted Sister recording Christmas songs.

The album comes out on May 8 via Razor & Tie, which coincides with the release of his autobiography Shut Up and Give Me The Mic. However, Snider’s rendition of the song “Cabaret” has been made available for stream and can be heard after the jump.

And here’s the track listing to Dee Does Broadway:

2. The Ballad Of Sweeney Todd

5. Whatever Lola Wants (with Bebe Neuwirth)

6. Music Of The Night (with guest violinist Mark Wood)

7. The Joint Is Jumpin’ (with Jesse Blaze Snider)

10. There Is Nothin’ Like A Dame (with the stars of Priscilla Queen of the Desert: Will Swenson, Tony Sheldon and Nick Adams) 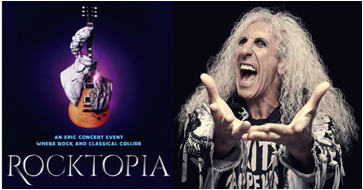