The Syndicate, Metal Insider’s parent company, is a promotion and marketing company that has championed the metal scene for almost 15 years. In our weekly Radio Spotlight, we’ll offer a look behind the scenes of metal radio from some of the stations and outlets playing metal that the Syndicate works with to spotlight the newest underground music on the airwaves and the people that bring it to you.  Read on for a breakdown of Andrew “Cutter” Puyleart’s efforts to tie the new back to the old on metal’s national stage, followed by a brief look at some new records making their way to the airwaves, courtesy of the Syndicate.

Cutter has crafted a syndicated metal show built around classic bands that still looks to tie in current metal.  “85 percent of the music is metal from the 80’s and 90’s, with some older stuff from the 70’s and some new metal thrown in,” Cutter says.  “The goal is to get the metal that we grew up listening to on the radio. You have to know where you’ve been in order to know where you’re going, so for people into newer metal, they can hear the bands that influenced their favorite bands.”

The show currently has five commercial FM affiliates from Oregon to West Virginia, along with its home base of WRQE.  That may seem modest for a syndicated show, but The Pit is relatively new compared to long-running shows under Envision’s umbrella like Full Metal Jackie; in fact, it has only been syndicated since January.  “It seems like the old school and/or hardcore metal fans are eating this up,” Cutter says.  “Every week it seems to get bigger and better.”

Classic metal shows aren’t unusual in radio, but Cutter sets himself apart by finding ways to blend slightly more underground names in with marquee artists.  In the six months that The Pit has been active, Cutter has interviewed a number of artists, including:

When interviewing these artists, Cutter will typically run a new song they play on alongside a well-known standard to help trace the roots of a band back to its foundations.  This weekend’s guest will be Rex Brown, who exemplifies this, given his new band Kill Devil Hill and his old work in Pantera and Down.

New at Metal Radio This Week:

The Long Island-based experts of fusing New York hardcore with metal are back with the first single from their new album, The Cursed Remain Cursed.  It’s the band’s first new full-length since 2001’s From Bliss to Devastation and first release for Candlelight.

Fronted by Neil Fallon (Clutch) and featuring members of CKY, Fireball Ministry and Fu Manchu, this new single sounds kind of like Clutch gone a little more overtly mid-70s rock in its grooves.

The Syndicate, Metal Insider’s parent company, is a promotion and marketing company that has championed the metal scene for almost 15 years. For radio promotion, street marketing, publicity, event marketing and brand consultation in the world of metal, contact us here. 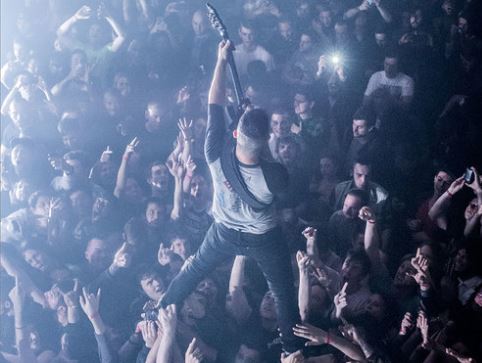