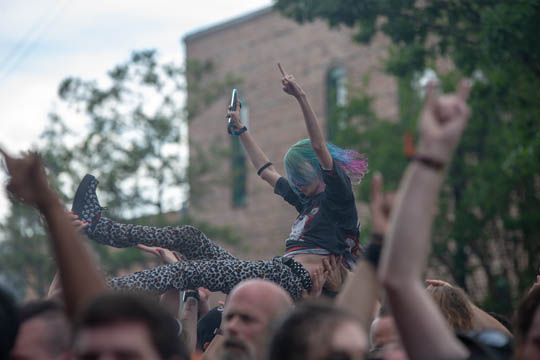 Jacksonville, Florida has been host to Welcome To Rockville since its inception in 2011. Located along the banks of the St. Johns River, Metropolitan Park came to life once again when roughly 99,000 people attended the sold-weekend this past May 3rd-5th.

As my first-time attending Welcome To Rockville, I was quick to notice the sheer size of the facility being used by Welcome To Rockville. Not only do they use the entirety of Metropolitan Park along the riverfront, but the main stage is set in a parking lot directly beside TIAA Bank Field, home of the Jacksonville Jaguars.

Three stages ran all day starting at 12:30 with Cleopatrick and ending with KoRn by 11 pm. Amigo the Devil played a more intimate show the night before at the pre-party, but that didn’t stop the crowd from forming during his set. Hands Like Houses and Light The Torch both played phenomenal sets, but East Lansing natives Wilson brought the party.

Wasting no time, they came out with hard-hitting Dumptruck to open their set, and the crowd erupted into total chaos. Over eight songs, this 5-piece rock band covered Chumbawamba and sang with Hyro the Hero.

Hyro The Hero came out swinging during his main stage performance… literally. Full of energy, and feeding off the crowd, nothing could hold him down. It was about the time Beartooth came on when the skies started to darken, and we knew rain was on its way to us. Holding out until after Tom Morello took to the main stage to play a fantastic set in which the digital backdrop played through a barrage of political points, and news stories that have all sparked controversy.

Killswitch Engage hit the stage, and the skies finally opened up. The rain came down fast and heavy, causing the all too well-known evacuation call to come over the loudspeakers.

Once the lightning and storm passed, the doors opened to Flogging Molly picking up where the schedule left off, with no band being cut from the day. In a day filled with chaotic music, Flogging Molly was just the break we needed, before taking a trip back in time with The Crystal Method.

With lighting once again flashing all around us, no one was sure if the night would end early or if Evanescence would take the stage for their first rock festival performance in two years. Amy Lee took to the stage and thanked everyone for waiting out the rain before laying into a thirteen-song set that spanned more than an hour.

Closing out Friday was none other than KoRn. No stranger to the DWP festival circuit, they never disappoint. A shorter set, due to the rain delay earlier in the day, KoRn played a greatest hits setlist, that included songs like “Got The Life,” “Blind,” and “Freak On a Leash.”

The most interesting point of this day was watching the American Sign Language (ASL) interpreter signing the obscene lyrics and gestures throughout Wilson’s set. 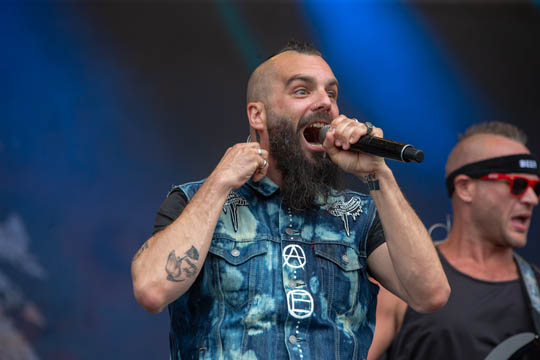 Arriving today, the weatherman promised the skies would stay clear, and that they did. Direct sunlight and a monstrous humidity made the day sweltering.

Crobot opened day 2 with Dead Girls Academy, Boston Manor and Badflower following suit as the crowd poured in over a few hours.

Talk of the day was the reunion of The Damned Things for their first performance since 2011. Thanking everyone for coming to check them out, they spoke between songs about things to expect from them in the coming months. Maria Brink and In This Moment put on what could only be described as a theatrical play in their allotted time slot, and Skillet threw down with everything they had while playing their greatest hits.

Black Label Society’s set was filled with energy, with lead singer/guitarist Zakk Wylde playing multiple solos throughout. At one point, Zakk took to a piano to lead a tribute to the late Vinnie Paul and Dimebag Darrell.

The break-in today’s schedule was Alabama native, Yelawolf. Playing through his more well-known songs, this was by far the most massive crowd on the River Stage all weekend, with everyone singing along with every word, and the bass hitting so hard the ground shook.

Jacksonville’s hometown boys, Shinedown graced the stage, thanking fans for being with them and supporting them all along. Lead singer Brent Smith interacted with the crowd heavily between songs, even shaking hands with photographers in the photo pit at one point.

Direct support closing out the Metropolitan Stage tonight was Judas Priest. Rob Halford and crew came out swinging, showing everyone how to stay on top even after fifty years in the business. With some costume changes throughout the set, and even riding the motorcycle out onstage at one point there were no tricks left after their twelve-song setlist.

Just watching Judas Priest’s set, and seeing how a band that has been around that long still has what it takes to put on a fantastic performance and capture the audience. 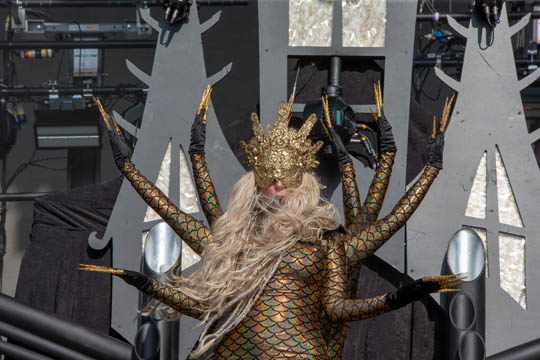 This day started out like any other Florida day, I presume. A torrential downpour with 60mph+ winds, causing complete chaos on the grounds. Multiple updates on social media platforms and we were finally informed that doors would open around 3:30 pm.

Seeing that such a late start was in order, multiple bands were cancelled due to time restrictions. Hyde, The Dirty Nil, Shvpes, Glorious Sons, While She Sleeps and Dorothy all got the axe.

Grandson played to doors open with Yungblud and Reignwolf seeing a gradual increase in the crowd as the last of the storm died off. The River Stage saw Architects perform a seven-song set, including “Doomsday” and “Nihilist.” Luke Spiller and The Struts hyped the crowd from the moment they hit the stage, showing they came to party.

Fever 333 literally tore the stage down during their set. Lead singer Jason Butler ripped a tarp covering the monitors off and ran around with it on like a cape. Drummer Aric Improta jumped off his kit, kicked things over and caused overall chaos. Guitarist Stephen Harrison jumped offstage and roamed the crowd all while playing. The fans who’ve seen them before knew what was coming, but for most who had only heard about the tornado that is Fever 333, they were in awe.

Meshuggah closed the River Stage down for the weekend with a heavy hitting set that included “Born in Dissonance,” “Future Breed Machine,” and “Demiurge.” As my first time seeing them, and them not moving around much, their set was amazing overall.

Papa Roach, taking the place of Prodigy after the untimely passing of frontman Keith Flint, paid tribute to them during their set with a rendition of “Firestarter” unlike any I’ve heard before.

Bring Me The Horizon brought a new stage show out at Welcome To Rockville that included dancers, risers, and fire. With fire spraying in multiple directions throughout the set, Oli Sykes and the guys from England started with “MANTRA,” and played through an eleven-song setlist that included hits “Happy Song,” “Drown,” and “Throne.”

Tool took to the stage and played through a ten-song setlist, two of which officially debuted in Jacksonville, and was the first new music to come from Tool in thirteen years. “Invincible” and “Descending” were tossed into the mix with hits “Stinkfist,” “Forty Six & 2,” and “Parabola.”

This easily goes to a zippo performance done by Fever 333. I heard this might be happening and knowing how they usually are onstage I made a point of attending. The California three-piece kept calm and did a fantastic three-song acoustic set that included “Am I Here?,” “Inglewood/3,” and “Made In America.” 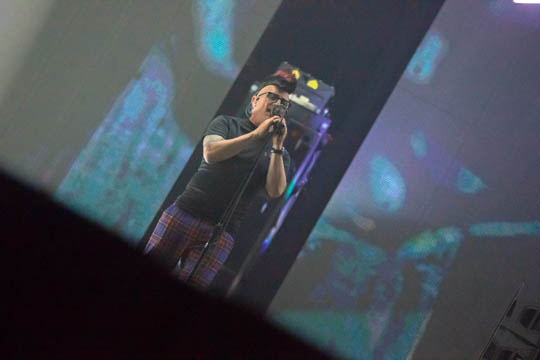