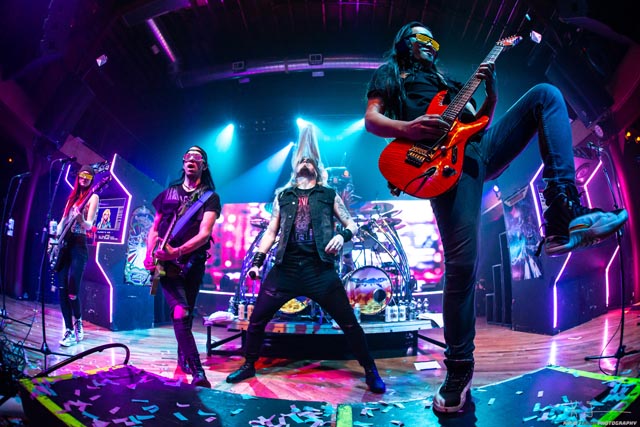 Having not seen Dragonforce since the Fall of 2015, I was pretty excited to get an opportunity to see them in the Spring of 2020 on their US tour with Unleash the Archers and Visions of Atlantis, but we all know what happened there… However, they announced another attempt at the tour here in the US two years later, minus Unleash the Archers (most likely since they completed their own headline tour in Fall 2021) but with the amazing addition of US-based melodic/symphonic metal band Seven Spires and Greek power metallers Firewind (who took the spot on the revised lineup that was initially to be populated with Battle Beast, but dropped off the tour before it kicked off). Being quite the comprehensive US and Canada tour, it kicked off on 7 March in Santa Ana, CA, and will conclude on 26 April in Berkeley, CA, amounting to almost two months across the two countries!

The Michigan date was initially scheduled to take place at St. Andrew’s Hall in downtown Detroit, but the venue has some structural issues, which resulted in the temporary closure while the owners sort that out. Therefore, the show was moved to Pontiac’s Crofoot Ballroom, one of metro Detroit’s stalwart midsize metal venues (an ideal outcome if the alternative is cancellation!). Arriving at the venue about 30 minutes before doors were scheduled to open, the line was already two blocks from the entrance – a very impressive turnout for a metal show on a Sunday night in metro Detroit!

It took time for venue security to open the doors and start checking tickets; I arrived in the photo pit right as Seven Spires’ backing track started playing (right in the nick of time!). Ripping straight into their set with opening guitar riffs courtesy of Jack Kosto and crushing harsh vocals from Adrienne Cowan for the song “Gods of Debauchery,” Seven Spires had the crowd’s immediate attention. This is their first successful attempt at opening for a large touring act (they were part of the incredible touring package of them, Omnium Gatherum and Insomnium, in March 2020 but were, therefore, one of the first COVID tour cancellations). Their hard work is paying off in spades, judging by the crowd’s reception. Following “Gods,” they proceeded through their all-too-short set, with Herbie Langhans of Firewind joining Adrienne onstage for the enjoyable track “Lightbringer” and concluding with “Dare to Live.” 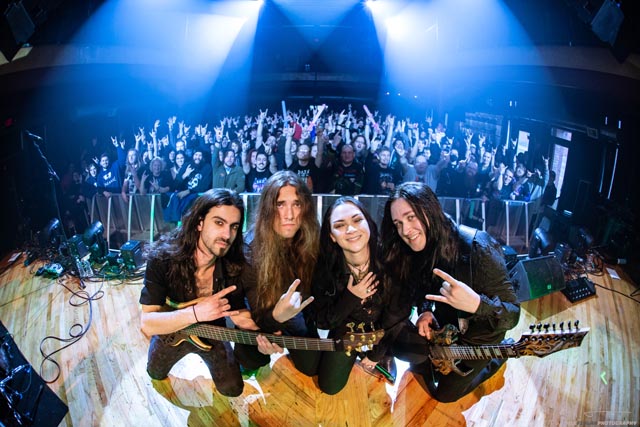 Following up, it was Visions of Atlantis’ time to impress. Getting a chance to have another go at a nationwide US tour after their COVID cancellation in March 2020, the band’s enthusiasm as they took the stage was palpable! Singers Michele Guatoli and Clementine Delauney have fantastic chemistry on stage as they sing back-and-forth, grasping hands in rhapsody and locking glances; photographing them is always a joy. They are touring in support of their upcoming album, succinctly entitled “Pirates,” so it’s fitting that they broke out the black flag to help close their set, waving it aloft as the crowd chanted along! 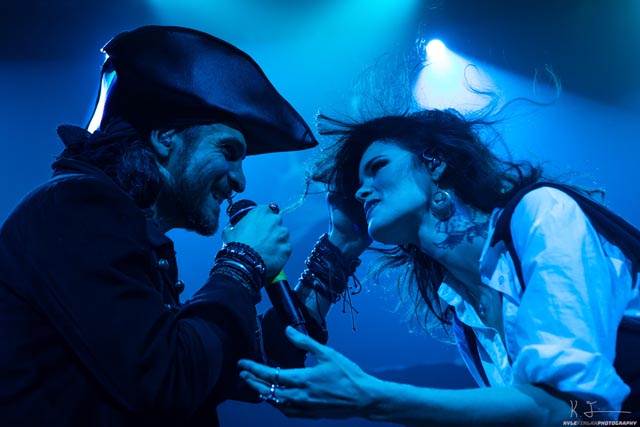 Next, Guitarist Gus G.’s band Firewind took the stage. Bringing their brand of old-school power metal to the stages of Detroit for the first time in nine years, the crowd was totally into it. Having this band at this particular place in the night’s lineup seemed apt, serving as a means to shift the mood from the symphonic to the more power-focused bent of Dragonforce. Closing out their set with a cover of “Maniac” (in my opinion, the highlight of their set), the crowd was primed for what’s next. 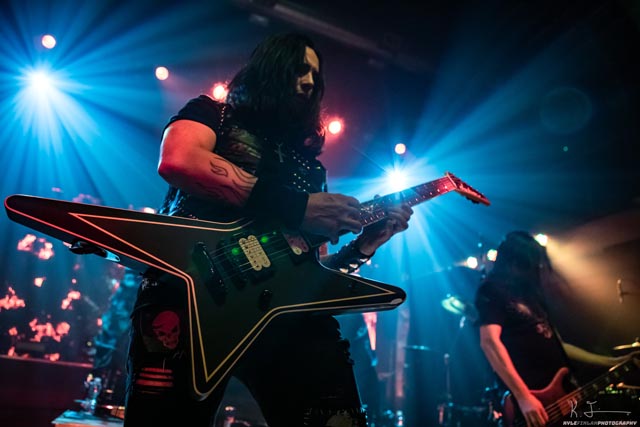 Finally, the main event takes the stage. Uncovering the giant dragon towering over the drum kit and the two stand-up arcade cabinets-turned-guitar risers, it becomes immediately apparent that Dragonforce firmly know their audience and theme. They unabashedly embrace their gaming-adjacent place in metal history, with their big break into the mainstream arising from their track’s placement as one of the more challenging songs on “Guitar Hero III” (much nostalgia from my years in college asking my roommate to use his Xbox 360 to get a chance to play!). Launching right into their set with “Highway to Oblivion” off of their latest album, Extreme Power Metal, Herman Li’s guitar chops were on display here.

The band’s intent on leaning hard into the “cheesy power metal” trope with CO2 and confetti cannons, spark fountains, and glowing glasses remained imminent. With all of the additional production, seeing their set can spark joy in even the grumpiest person; I couldn’t help but grin while being in the photo pit and watching the spectacle unfold. The band’s performance on stage has tightened up significantly since I last saw them in 2015, and they are very deserving of a headlining slot as a result. Continuing on the nostalgia and video game-heavy theme, they had snippets of a Sega Genesis advertisement as an interstitial between “Ashes of the Dawn” and “Heart Demolition,” as well as covers from music from “Castlevania” and “Final Fantasy VII” with footage from the games playing on an LED screen behind them.

Dragonforce have been bringing guest guitarists on stage for each show for a banjo-fueled cover of the music from the game “Farming Simulator” (this entire song being part of their set seems a bit meme-y, but entirely hilarious!). For the Detroit set, Jack Kosto from Seven Spires joined the Dragonforce guys onstage, with Jack even taking part in some country-style dancing with the band between guitar solos. In true form, the band closed out their evening by playing “Through the Fire and the Flames,” totally fitting for the nostalgia trip that catching this band live has been. I can’t recommend seeing this show enough, if only for the incredible diversity of the bands on stage and the spectacle of Dragonforce’s stage production! Go check them out if you can! 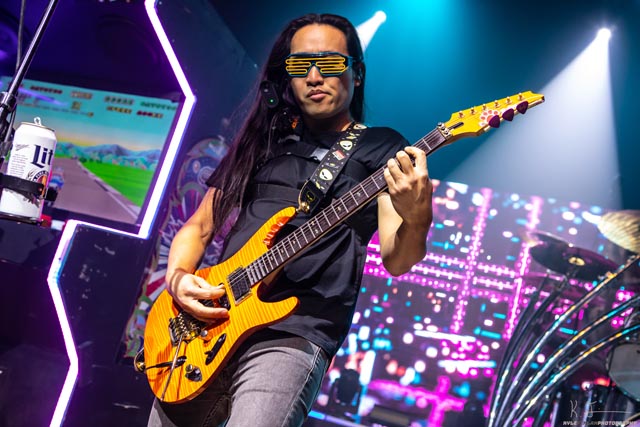 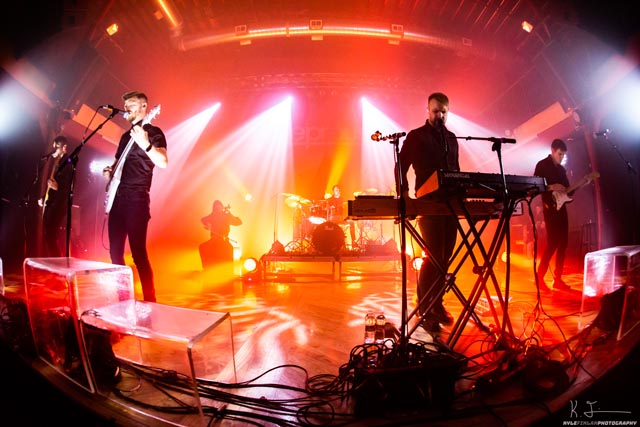 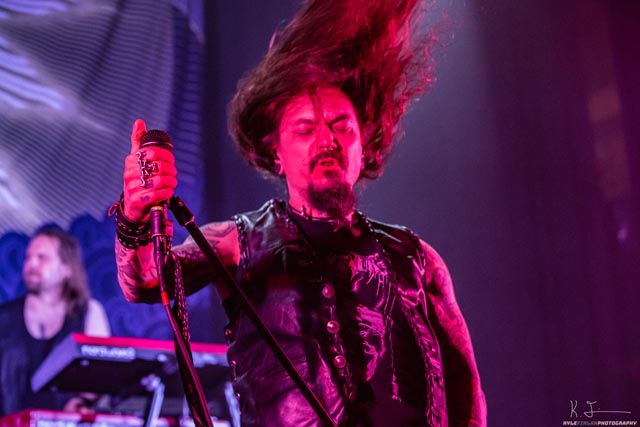