As promised, Hellfest 2017 was “One Hell of a Ride” For three day; over 120 bands took over the small town of Clisson, France.  Proving that Hellfest is quite possibly the greatest metal festival around today, dare I even say Ever!

“Are you ready for some awkward Canadian prog metal?!?!” –Devin Townsend

The opening day of the festival had many great bands. Such as Deep Purple, Rancid, Obituary, Sabaton, Powerwolf, and Leftover Crack. Behemoth were clearly the shining stars of the main stage. With one of the most powerful sets of the day, they proved that they are indeed worthy of headlining status. Rob Zombie gave a full spectral and US style production, which is somewhat rare for European Festivals. Ministry crushed a set with mostly new material, but included classics such as “Just One Fix” and “N.W.O.” One of the greatest aspects of day one was the Valley, which hosted Electric Wizard, Baroness, Red Fang, Helmet, and Subrosa all together on one stage. Monster Magnet closed the Valley Stage with an especially energetic Dave Wyndorf as they opened with “Dopes to Infinity.” And after In Flames closed out the main stage, the sounds of “Black Hole Sun” echoed throughout the park.

As the heat was blistering and the drinks were flowing, the hungover and sun-baked crowd showed no signs of being exhausted. Phil Campbell and the Bastard Sons gave a great performance filled with new material and Motorhead classics, also sneaking in Hawkwind’s “Silver Machine” Nails played wither first European show in support of their latest album, You Will Never Be One of Us… Steal Panther brought in a crowed filled with ladies on shoulders making sure they weren’t getting any tan lines. Primus got the whole Valley stage dancing and singing word for word to all of their classics. Apocalyptica preformed a beautiful set filled entirely of Metallica classics and had the crowd singing along as if Hetfield was actually on stage. Aerosmith gave a classic hit filled performance, as part of their Aero-Vederci Baby tour. Closing their set with “Dream On” and “Walk This Way, “Aerosmith said their goodbye to France. Though they went on longer than expected, Kreator was forced to go on late. But they refused to cut any songs from their set. Kreator had one of the most surprising sets of the day, they filled the stage with spectral of fire, flare guns, Co2 cannons, and one of the most intense performances of the festival. It was as if hell had opened up and Satan himself possessed Millie Petrozza.

“Merci Beaucoup, or as they say in Texas, “Fuck Yeah!” – Neil Fallon

The final day at Hellfest proved to be perhaps the best. Ghoul, Prong, and Motionless in White played early to eager fans. Black Star Riders gave a set filled with new material and Thin Lizzy classics. Devildriver provided one of the biggest mosh pits of the whole weekend. Prophets of Rage gave a set filled with new tracks, along with material of Rage Against The Machine, Cypress Hill, Public Enemy, and an all-star hip hop medley. But the shining moment came from an instrumental version of the Audioslave classic, “Like a Stone” dedicated to “fallen warrior” Chris Cornell. Easily the most moving movement to the festival.

Phil Anselmo’s new project Scour made their European debut. Phil had a sheet music stand holding his lyrics and after every song, they were ripped in half and thrown into the crowd. And Scour left the crowd in awe as they closed their set with Pantera classic, “Stronger Than All.” On only his second show with Five Finger Death Punch, Tommy Vext won over the crowd of knuckle head fans. Hawkwind gave a psychedelic performance filled with theremins and key-tars. Emperor dug deep into some tracks that had never played live before. Coroner closed the Alter Stage with a set of death metal classics, and some guy playing with a laptop. Slayer headlined the main stage. While the musical performances where as heavy and fast and one would expect from a Slayer show, Tom seemed rather somber, winded, yet rather grateful when he spoke between songs. The last band playing into the night was Dillinger Escape Plan. While their final European tour is winding down, they clearly are fueling every performance with every bit of energy they have. For a band that is saying “farewell” they still play with the intensity that they were giving when they were just saying “hello.”

The sun was out and blistering ever day. But when the it finally set, the festival heat index rose as the fire was unleashed. Every bar and merch stand gave pryo shows. Bonfires were set around the ground and the live music went until 2:30 in the morning. The warzone field was fenced in with barb wire and guard towers that surrounded the court yard with fire. And the ever massive Lemmy statue lit up the sky as the God looked down on us, stood watch over his legion of followers and said, “Rock Out.”

With countless amazing bands spread over six stages, there would be several situations where great bands would overlap times on stages across the park. Naturally some tough decisions had to be made on who you wanted to head bang with. But still, there could be worse problems or choices to make.

Hellfest is one of the best-run and most organized festivals I have ever attended. The food was great, the bartenders walked around carrying kegs, so beer was easily accessible no matter where you were on the grounds. And the cashless cards were a great way to not be carrying around stacks of cash for drinks, but however, we’d highly recommend purchasing ahead of show time. The Metal Corner town had great vendors, art galleries, wrestling, barbers, street signs, street sculptures. Everything you would expect from an actual town.

Hellfest went beyond being just a festival with great bands, it was a hometown for metal heads. A town of thrash and a Disneyland for death metal. Every day there were new sights to see and every moment there was great music. A visit to Hellfest is a pilgrimage that every metalhead must take in their lifetime. 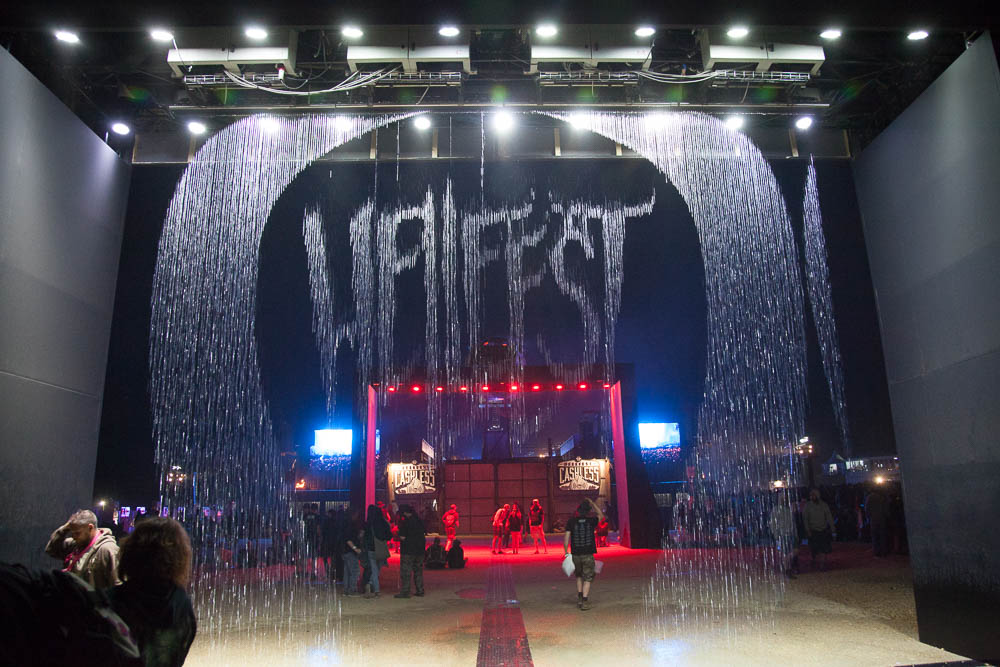