The Decibel Tour never disappoints as we’ve seen bands such as Behemoth and Kreator take the headlining spotlight. When Morbid Angel and Cannibal Corpse were announced to co-headline 2019’s edition, we knew it would be a legendary trek. However, shortly after the reveal, Cannibal Corpse guitarist Pat O’Brien was arrested for burglary and assaulting a police officer while a fire broke out at his Florida home. At that time, Cannibal Corpse’s future was in question and so was this tour as it’s difficult to replace O’Brien’s ferocious and iconic talent.

However, these Florida death metal legends have recruited Hate Eternal’s Erik Rutan as the group has a long-lasting relationship and friendship with the guitarist. The two bands recently toured together as it was four days after their run in late 2018 when O’Brien’s unfortunate incident took place. We spoke to Rutan about this particular trek as he emphasized practicing every day for hours as O’Brien is one irreplaceable guitarist. Despite producing four Cannibal Corpse albums, Rutan told us that he believes O’Brien is one of the best death metal, if not, best metal guitarists out there. With that being said, we were curious if this changeup would have impacted the overall ticket sales. However, on March 7th at New York City’s Playstation Theater showed the tour was on fire as the venue was packed full of fans hungry for an evening of death metal destruction.

Colorado death metallers Blood Incantation opened the night as the room set with a stoner blaze filled with gazing riffs as the group continued to bring 2016’s Starspawn to life. The room was half packed at this point as we didn’t know what the turnout would look like. However, as the lights dimmed and the energy persisted, we knew we were in for a riveting evening of death metal bliss. Songs included: “Starspawn,” “Chaoplasm,” “Vitrification of Blood (Part 1),” “Hidden Species (Vitrification of Blood Part 2),” and “Slave Species of the Gods.” 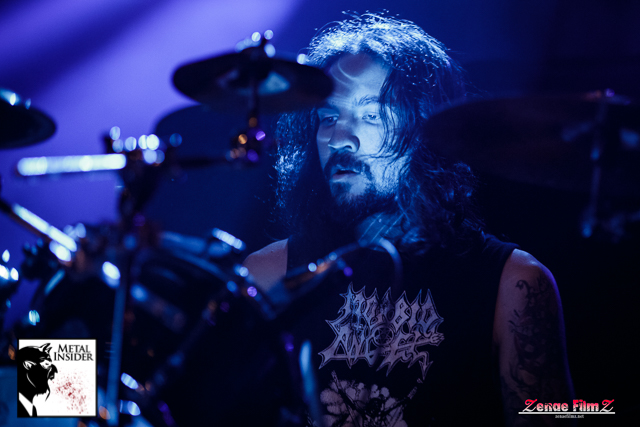 Necrot were up next as they arrived a few minutes earlier than scheduled. These Oakland California death metal punks brought more of a rebellious and chaotic energy as their death riffs morphed into a crossover thrash style. The band continued to support 2017’s Blood Offerings as they went into songs such as “The Blade,” “Rather Be Dead,” “Shadows and Light,” “Empty Hands,” “Into the Labyrinth,” “Breathing Machine,” and “The Abyss.” 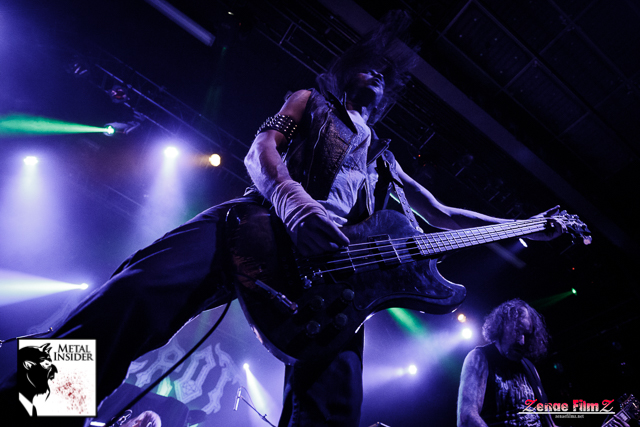 Morbid Angel finally returned to the NYC stage as it’s been nearly two years since they appeared back in 2017 at Gramercy Theatre. However, this evening showcased their tighter new-ish lineup. Despite David Vincent’s absence since 2015, this new era of the group has sparked a fresh light in these death metal legends. The fans in the packed house picked up on this energy as bassist/vocalist Steve Tucker continued to engage with the audience. Speaking of light, this night was probably one of the brightest we’ve seen death metal perform on a NYC stage.

However, that didn’t stop guitarist Trey Azagthoth from hiding behind his hair. While the group could have fully supported 2017’s Kingdoms Disdained via Silver Lining Music, the evening was more of a momentous greatest hits kind of night. As the show progressed, Tucker pointed out there were members of Suffocation in the house and dedicated the song “Nothing Is Not” to them. Songs included:”Piles of Little Arms,” “D.E.A.D.” “Garden of Disdain, “I,” “Nothing Is Not,” “Day of Suffering,” “Blasphemy,” “Abominations,” “Unholy Blasphemies,” “Prayer of Hatred,” “God of Emptiness,” “Architect and Iconoclast,” and “Blood on My Hands.”

For those who followed the story about Pat O’Brien, seeing Cannibal Corpse perform without him was bittersweet as we missed seeing him on stage, but we were also excited to see Rutan. While many fans participated in crowd surfing and embarking in the massive mosh pit, there were some who were curious to see Rutan’s overall turnout. When Cannibal Corpse walked onto the stage, it was surprisingly just like any other CC show. Aside from Rutan, the only difference was the lighting. We are used to seeing these Florida death metal legends perform under blood-red lights and this night the group played in a brighter setting. However, that did not change their blistering performance. Similar to Morbid Angel, they could have promoted 2017’s Red Before Black via Metal Blade Records but went into a decent set filled with all the hits.

Corpsegrinder ruled the stage as Rutan’s professionalism and stamina honored O’Brien’s absence while proving to be the perfect fill-in. The group consistently delivered a set with blistering intensity including bassist Alex Webster and guitarist Rob Barrett. And of course, drummer Paul Mazurkiewicz, despite his magnitude behind the kit, he didn’t seem to stop smiling throughout the set. What we love about this group is that each member has a distinct style of their own that there will never be a dull moment at a Cannibal Corpse show, which is why we will never get sick of seeing them.

Overall, we saw old school and new school fans join together for an iconic evening mixed of bands just getting started to the most influential acts in death metal history, and we loved every moment of it. 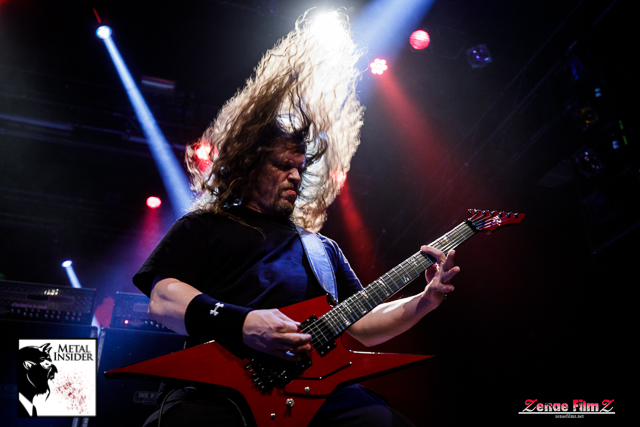