If you’re in Pennsylvania and need a live fix of metal jokesters Steel Panther, you’re in luck. Steel Panther has announced that they will be playing two drive-in shows there in September.

Dubbed the “Fast Cars and Loud Guitars” tour, the first show will take place September 11 in Pittsburgh at the Starlite Drive In, with the second happening September 12 in Scranton at the Circle Drive In. For both shows, the band will play live with their performance being broadcast on the movie screen behind them. Audio will be broadcast through the theater’s PA system, as well as via FM transmitter.

“Bring your hot rod and hot dates to the concert event of the weekend,” said the band in a statement on their website announcing the shows. “This ain’t your momma’s NASCAR. This is STEEL PANTHER live and out of our cage in Los Angeles. You’re welcome, Pennsylvania. Unfortunately, the local government has informed us that it is totally ILLEGAL to attend this concert naked. They blamed COVID; so please STILL wear a mask when you’re around strangers!”

Last month, Steel Panther announced that they would be playing a second live stream event. “Rockdown In The Lockdown” will take place August 16 at 2PM Pacific/5PM Eastern and broadcast live from the “ultra-sanitized, production-filled, multi-camera” Drum Channel Studio at Drum Workshop in Oxnard, CA. Though live, the production will also include pre-filmed comedy vignettes to give “the virtual experience more depth and laughs.” Proceeds from live stream tickets will be split between a Los Angeles animal rescue and Live Nation’s Crew Nation Fund.

Steel Panther have been keeping busy during shelter-in-place. According to drummer Stix Zadinia, the band has been working on new music in their downtime. They have also been releasing daily vignettes on social media comedically explaining what day it is. In June, the band released a music video for the ‘Heavy Metal Rules’ track “Let’s Get High Tonight” as their boy band alter ego F.P.C. (Four Pimp Chumps).

Tickets for both drive-in shows, as well as their upcoming live stream and 2021 tour dates, including VIP upgrades, can be found here.

Drive-in concerts have been a popular way of dealing with live music during the pandemic. In June, Doro performed as part of a successful series of drive-in shows in Germany. The UK has also found success with the “Utilita Live from the Drive-In” series. Drive-in shows have been popping up across the US as well, some more successful than others. 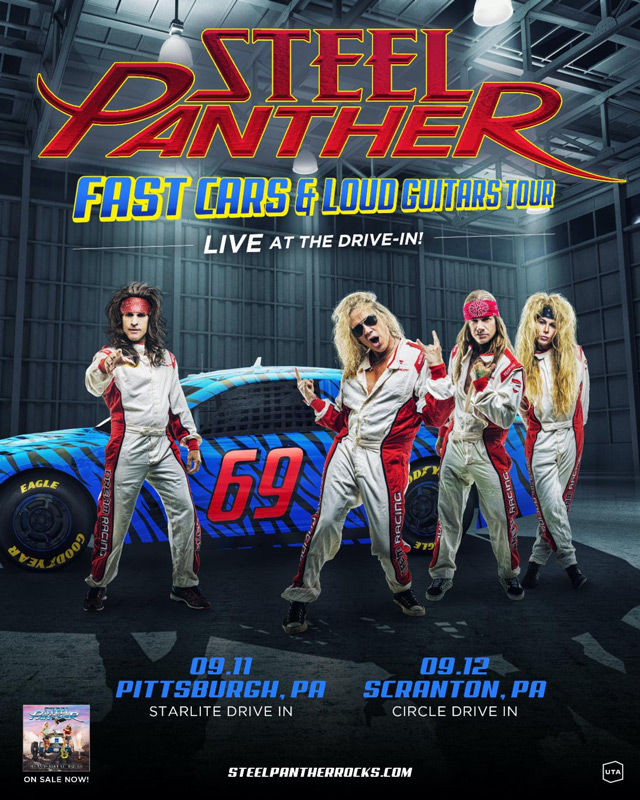