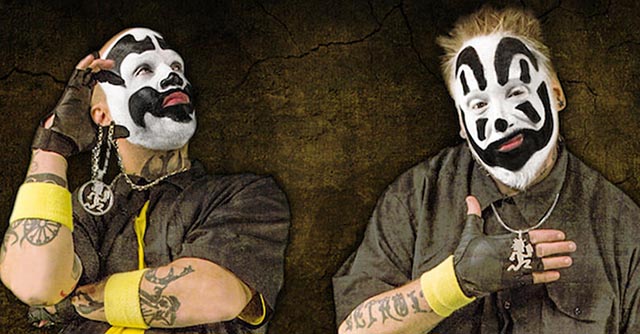 The rapper revealed the diagnosis during a seminar at the duo’s Gathering Of The Juggalos this past weekend. Speaking on stage, he related his scary ordeal to the audience,

“For those of you that haven’t been to my house, the studio is probably 40 yards from my front door. So I noticed walking out to the studio every day, by the time I got to the fucking studio, I was winded. I’d be like, ‘What the fuck man, am I really this weak from not doing any shows all during COVID or whatever?’ Like what the fuck, I’m all winded and shit? Then when I’d walk up to my mailbox in the front, I’d be like ‘Oh fuck, I’ve got to take a break. What the fuck’s the problem?”

The incident prompted him to go to the hospital where he was given an ultrasound.

“They put some gel over my heart and the lady was looking at my heart. We could tell she was tripping about something, but she wasn’t a doctor.

So she kept saying the doctor will be down here soon. The doctors were all tied up upstairs in the hospital and shit, understandably. She told me, ‘They want you to go straight home, get in bed and they’ll call you first thing in the morning.’

They took me in the back and shit, and basically they just came out and told me that I have heart failure. That scared the shit out of me because we don’t have that running in our family or nothing.”

Violent J said that the official diagnosis is atrial fibrillation. According to Loudwire, who consulted the Mayo Clinic website, A Fib is a condition where the upper chambers of the heart (the atria) beat irregularly and out of coordination with the bottom chambers (ventricles).

Following the diagnosis, Violent J revealed that he spent a few days in the hospital while doctors tried to correct his AFib. Medication did not work, so they had to jump his heart, twice.

“I woke up and they said ‘It’s working, but it can go back any minute.’ So they drove me home and it was weird because when I got out of the car and walked to the house I was 100% back to normal, it was very fucking strange.

Like after feeling like that for a couple of weeks, all of a sudden I was right back to where I’ve always been. I could run out to the fucking mailbox and back no problem. But they said any minute it could flip back. And it flipped back probably three days later.”

That prompted doctors to perform a procedure where they went in and burnt scar tissue from his heart in order to correct the arrhythmia. Said Violent J, “When I woke up, they said, ‘You’re doing alright, you’re beating normal. But it could flip back any moment from now to six years from now.”

Due to this health scare, the duo also revealed that they will be going on one final tour next year that will take them to every major and secondary market in the US, as well as to Europe, Canada and Australia. Said Violent J,

“This don’t mean anything, that I’m gonna die or anything like that. It just means basically, we can’t do things the way we used to do. So…there’s really no way around it. We can’t really tour no more the way we were touring.

We’re gonna do one more tour next year around the world. We’re gonna do all the major markets the United States, and the b markets, and then we’re gonna go to Europe and Canada and Australia. It’s gonna be a slow tour, so it’s only gonna be like 3 or 4 shows a week. And that’s gonna be a farewell tour.”

This won’t be the end of Insane Clown Posse, however, as the duo still plans to play shows.

“That don’t mean we’re not playing. We’re gonna play every Juggalo weekend, every Hallowicked, every fucking Ballers, every event. Pretty much we’re gonna do a show somewhere every month—one show a month is our plan. It’s gonna be somewhere different.”

Most importantly, the duo still plans to record…a lot.

“Without touring, that absolutely means we’re gonna put out much more music. I want to make it clear, making music is not affected in any way, shape or form by anything going on with Shaggy or myself health-wise. We’re ready to fucking kick ass in the studio and that’s a fact.”

The full announcement can be seen below. Insane Clown Posse released their last full-length album, Fearless Fred Fury, in 2019. An EP, Yum Yum Lure, was put out in February 2021. They have reportedly been working on a new album, tentatively titled Yum Yum Bedlam, that is supposed to be released some time in 2021. A limited edition CD single bundle of Violent J’s solo track “Walking Home Monday” is also available now.