Following an extensive report by MetalSucks, bands continue to fire concert booker and First Row Talent owner John Finberg due to a lengthy list of allegations of sexual misconduct, bullying, harassment, racism, etc. While the news has gone public this week, groups have cut ties with Finberg long before, and a quick Google search, you will find a Reddit thread dating back nine months discussing similar allegations. Yesterday (29th), Nightwish, Amorphis, Delain, Battle Beast, Amaranthe, Swallow the Sun, and Sonata Arctica issued statements cutting ties with Finberg. While a few artists still haven’t addressed the issue, more groups, including Hammerfall, Angra, and PowerGlove, have announced they will no longer be working with him. Epica revealed they cut ties with Finberg back in 2014. We can only imagine what led to their decision six years ago.

Read the latest statements below:

“Due to the recent allegations against John Finberg, Hammerfall will no longer be represented by First Row Talent in North America.”

“Angra does not accept any form of abuse, bullying, racism or sexism. In view of the recent allegations against John Finberg of First Row Talent and based on our own experience working with him in the past, we have ceased all contact with Mr Finberg. First row Talent does not represent Angra in the United States or in any other territory.”

Powerglove is no longer working with John Finberg / first row talent. We will post an update as soon as we have more information about our next tour.

“We stand with all our colleagues against abuse, racism and sexism in the music industry and the world in general. Due to Finberg’s unethical ways we stopped working with him back in 2014.” 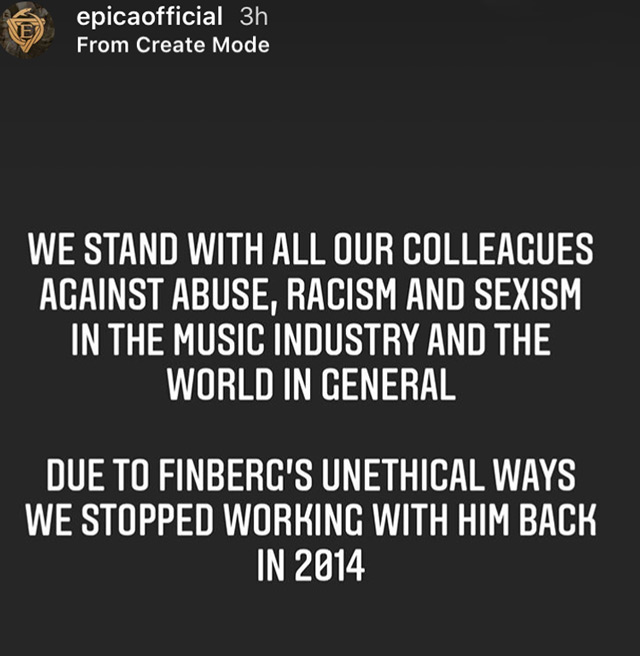