Before Varials had to postpone their North American tour, the band stopped by Chicago’s Beat Kitchen and took the stage. Apparently, during their set, a fan became agitated with the crowd killers at the show and grew even more upset when guitarist, Mitch Rogers, supported them. The disgruntled fan took to Reddit to post about his frustration and called out Rogers in his post:

I’m not coming to get crowd killed

.I’m not coming to your shows to get decked in the face by some idiot flailing his arms around

Im coming to your show to mosh, fuck people in the pit and have a good time.

At The Root of All Evil tour in Chicago during the varials set there was this dude in a white shirt crowd killing the entire set. He did it so bad he got into a fight with someone. There was no pit during there entire set. Just two dudes of hardcore dancing. Now during this fight Mitch(the guitarist?) for varials had the audacity to say the dude crowd killing everyone during there set was fine! Yes the dude spin kicking near the edge of the pit and picking fights with people is fine. The reason no one was moshing is that who wants to get round housed in the head.

I was going to buy a shirt from you guys, but honestly, that was such a piss poor display. I won’t come to another show again. A ton of people was pissed off that you guys decided to back your groupie and encourage him to fucking crowd kill. I’m coming to a metal show. You’re with a deathcore band why are you encouraging people to hardcore dance and crowd kill. In the beat kitchen of all the places!

The fan’s post got back to Rogers, which then led to a rebuttal:

HAHAHAHAHAHA holy shit this is funny

What I said over the mic at the show is what I always say when issues happen in the pit (which this guy conveniently left out) “if you don’t want to get moshed into then stand anywhere else in the room” it’s people like you who come to our shows and start fights because your definition of “fucking people in the pit” is different than other people’s definitions. We played one of the craziest and most violent shows of our career the day after this in Minneapolis and guess who complained ab it. No one ! This show was so tame. I’d love to see how mad you would have been if you came to ANY other show on this tour. Go “fuck people in the pit” at someone else’s show I could care less if you don’t come back.

The disgruntled fan then responded back with more words:

-“Shut up loser I was 19 and went more places than you’ll probably ever go in your life.”

first off I’m going to lead with this quote

The entire point of this post was that I don’t go to shows to start fights. So I’m not sure what this has to do with anything.

-“We played one of the craziest and most violent shows of our career the day after this in Minneapolis and guess who complained ab it.”

So instead of two people spin kicking in the pit, yall had 5? LMAO, I’m glad yall saw enough two steps in Minneapolis. We actually mosh in Chicago this isn’t an east coast city.

-“This show was so tame. I’d love to see how mad you would have been if you came to ANY other show on this tour.”

I’ve been to plenty of spite, and other beatdown shows where people know how to mosh. When you have TWO people crowd killing for an entire set, it kind of kills the energy.

-“Go “fuck people in the pit” at someone else’s show I could care less if you don’t come back.”

The loser comment is just me messing w you it’s reddit I figured you’d be used to trolling. But yeah, quarantine really got you bubbling up your anger over mosh pits huh? It’s been like a week since the show. You’re still mad about it. Get over it. And yeah I’ve played that same venue before, seen people mosh like normal, and get hit and not cry about it so…yes Chicago does mosh but apparently you don’t

Dude I’m just messin, it’s reddit. Why should someone make an entire post about me and other people roasting me with an expectation I’m not gonna respond and stir the pot. It’s the internet what else do y’all expect haha

It blows my mind that someone would make a reddit post ab me and expect me to not fuck around and roast people. Wtf else is reddit for ??

If this got you in the mood to listen to Varials, check out their videos for “Bleeding” and “South of One” below! 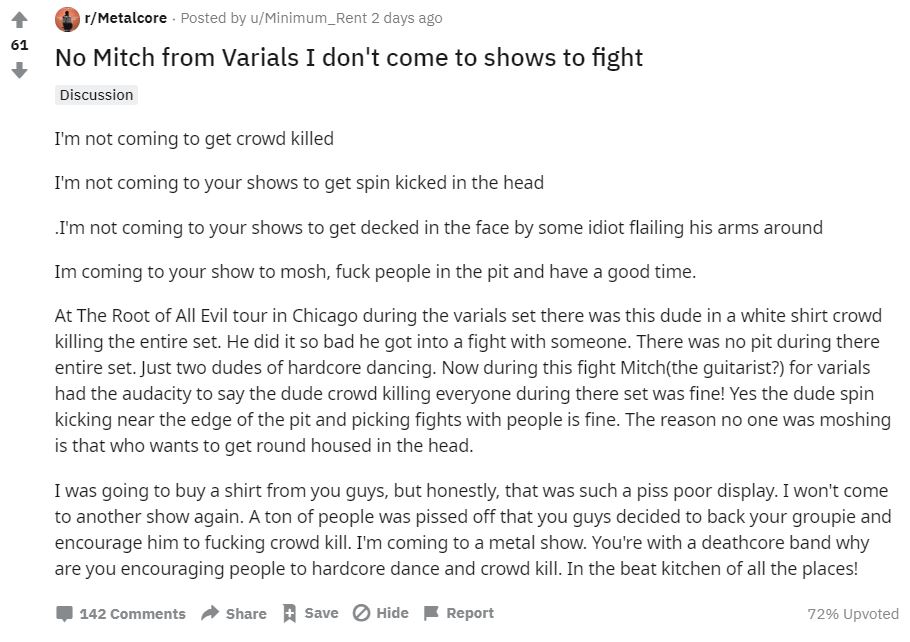 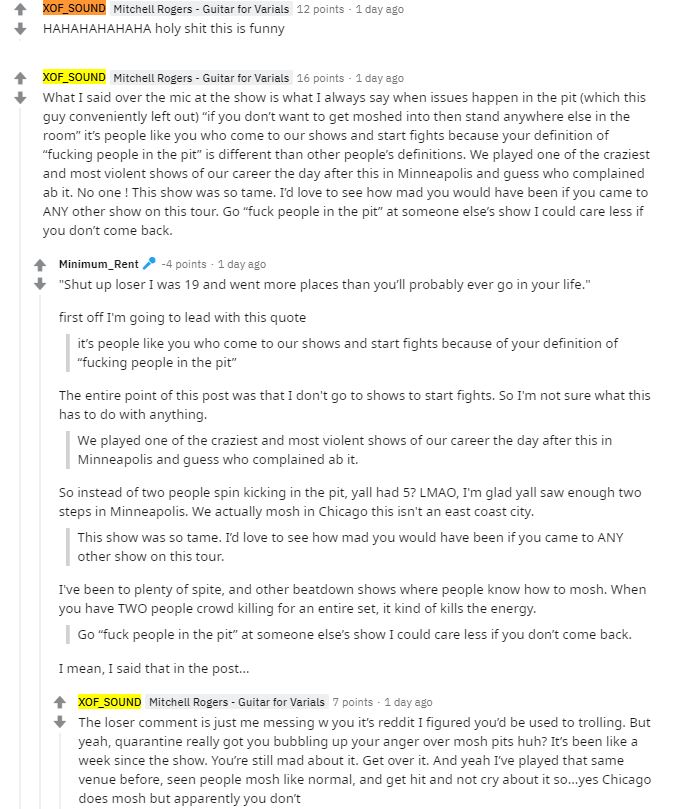