Soundgarden frontman Chris Cornell has been memorialized with the public unveiling of a commemorative statue on Sunday (7th) at Seattle’s Museum of Pop Culture. The life-size bronze sculpture was commissioned and donated to the museum by Cornell’s wife, Vicky. The statue sculpted by artist Nick Marras illustrates the legend holding an electric guitar, reaching for the sky. Soundgarden’s Kim Thayil, Ben Shepherd, and Matt Cameron attended the unveiling ceremony, and you can watch the clip below:

Today we remember the legendary Chris Cornell in Seattle with the unveiling of a statue in his honor ❤️ “And if we’re good we’ll lay to rest anywhere we want to go.” pic.twitter.com/10ecsYrDM9

“The soul of Seattle is what Chris Cornell knew. He pulled from places within himself that were amazing and poured it into us- Mayor Jenny Durkan pic.twitter.com/UNVtISVol5

On November 16th, an extensive retrospective collection of the legend’s career will be released and pre-orders are available at this location. 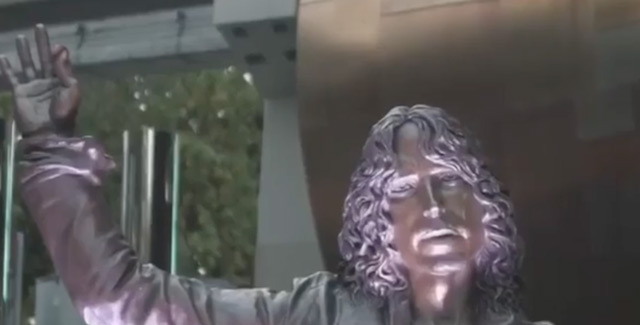