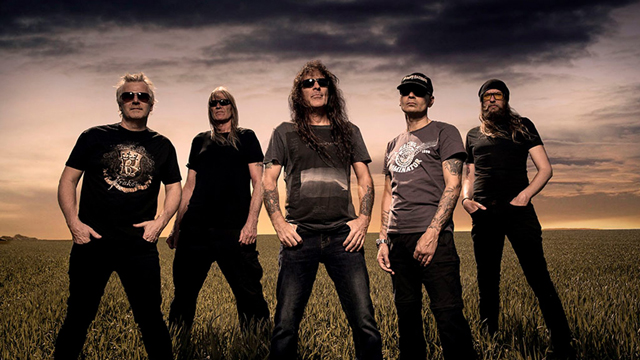 Iron Maiden co-founder and bassist Steve Harris’ side project British Lion debuted a new single, “The Burning,” Wednesday (11th). Audio of the track can be heard below.

“The Burning” comes from the band’s upcoming sophomore album of the same name. Said Harris of the album to Billboard:

“We’ve been sitting on this for quite awhile. We’d just grab moments whenever I was back in the U.K., just go and do it whatever chance we’d get. We did a lot straight after a couple tours we did, so it was very fresh, a very live feel to it. We wanted to make an album to represent where we are now, which I think this does.”

“We’ve been working on ‘The Burning’ for the past couple of years and everyone is really pleased with the results,” said vocalist Richard Taylor in a statement on the band’s website announcing the album:

“We started playing some of the songs live on recent tours and got a fantastic reaction from our fans so we are really excited to be sharing this album with the world. We’re also looking forward to heading out on the road again and seeing everyone at the shows.”

The Burning is the follow-up to the band’s self-titled debut album, released in 2012. “Spitfire,” the album’s first single, was released in 2018. A second single, “Lightning,” was released on October 31. Upon release, The Burning will be available as a digipack CD, double gatefold LP and digital download.

British Lion will be hitting the road for their first US tour in the new year. Kicking off January 18 in Orlando, FL, the band will circle the country for the rest of January and February, tagging along for the “Monsters of Rock Cruise” from February 8-13 and wrapping things up on February 20 in New York. The Picturebooks will be providing support on all dates. “It’s great for us to finally come to America to play some shows around the release of the new album there through Explorer1 Music,” said Harris of the tour. “The E1 team have been extremely pro-active and we’re delighted to be working with them on both the record and the tour.” Tickets for the tour are on sale now.

The band will also be heading out on a week-long UK tour starting December 15 in Norwich and ending in London on the 20th. Voodoo Six and Nine Miles Down will be providing support on all dates. Tickets are available now.

Harris’ work with Iron Maiden continues on as well. The band will be embarking on the final Asian and European legs of their Legacy of the Beast tour in May with the possibility of a live album and new music on the horizon.