Happy New Year, dear readers! New & Noteworthy is back! And, as it happens, we’re also fashionably late in returning to work. Yes, it seems that, in my state of being completely oblivious to all things for  the first week of 2013 (recovery from family holidays is a long process, guys), I missed the first week of new releases for the year. So we’re off to a rough start, yes, but the year can only get better from here, right? And yes, you are fully entitled to remind that I’ve sent this when we get to our first infinitely long list of the new year.

For those wondering what exactly it was that I missed last week, do not fear because I will list those releases on this list too. For now, though, let’s just dive right as we welcome the first (ed note: second?) metal releases of 2013!

If you know the story of Mutiny Within, or if you’ve paid attention at all to the metal world since mid-to-late 2009, you know that Mutiny Within quickly became one of the fastest rising stars in all of metal, only to very suddenly fall back down and break apart. Just when it seemed like the band was on the cusp of something major, they were unceremoniously dropped by Roadrunner Records, and lead singer Chris Clancy was forced to leave the band and return to his home country of England. But this band did not die, even when it seemed like it had already died. Credit the fans of the band for their unwavering loyalty and their demands to see the unfinished second album appear, but also credit the band members themselves and their inner circle of supporters for deciding to spread an important message through the continuation of Mutiny Within’s music. As seen in the music video for “Embers”, the lead single from Synchronicity, Mutiny Within places much of the fault on their eventual split with online piracy and illegal downloading. The introduction to the video is exactly that – a black-and-white statement on just how much the band was affected by piracy, and what piracy costs both the music industry and the worldwide economy. Thus, Synchronicity is more than just the realization of an incomplete dream. It is a fiery word of warning on what could happen if piracy continues unchecked. This album is to be taken seriously as much as it is to be enjoyed, and I for one intend to both enjoy it and to take a very serious message to heart.

If you appreciate the classic style of Gothenburg metal at all, then you will find a love for Mors Principium Est when you listen to them for the first time, which is ironic considering that the band hails from Finland. However, of greater importance is the fact that this album is coming into existence at all. The band experienced a number of serious lineup shifts following the release of 2007’s Liberation = Termination, culminating with the simultaneous departure of guitarists Tomy Laisto and Kalle Aaltonen in March of 2011. Luckily, both were able to be replaced before the year was out, and Mors Principium Est worked harder than ever to finish their fourth album. …And Death Said Live was crafted by veteran producer Thomas “Plec” Johansson, known for his work with Degradead, As You Drown, Miseration, and many others. This album is the first of many excellent melodic death metal albums on schedule for 2013, so get it now before other new releases occupy your attention, because …and Death Said Live will demand your full focus once you turn it on.

The Plot in You, Could You Watch Your Children Burn (Rise)

Paradox, Tales of the Weird (AFM)

Stuff I missed from last week:

Phil Anselmo and Warbeast, War of the Gargantuas (Housecore)

Overcome, No Reserves. No Retreats. No Regrets. (Facedown)

Black Veil Brides, Wretched and Divine: The Story of the Wild Ones (Universal Republic)

Next Week: A wonderful mix of new music, reissues, and vinyl combine to give an early jump-start to the new release calendar. Come check it out as we begin 2013 in style! 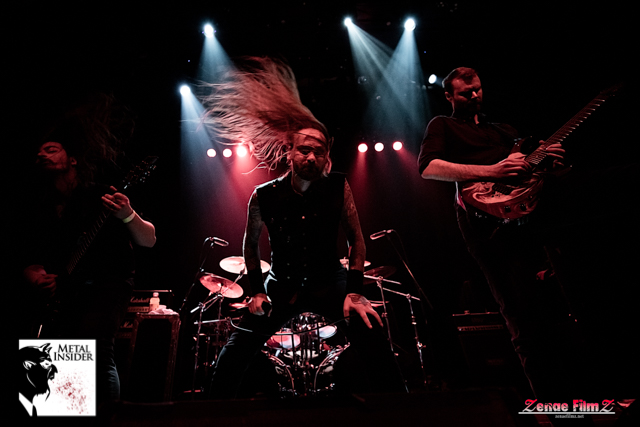