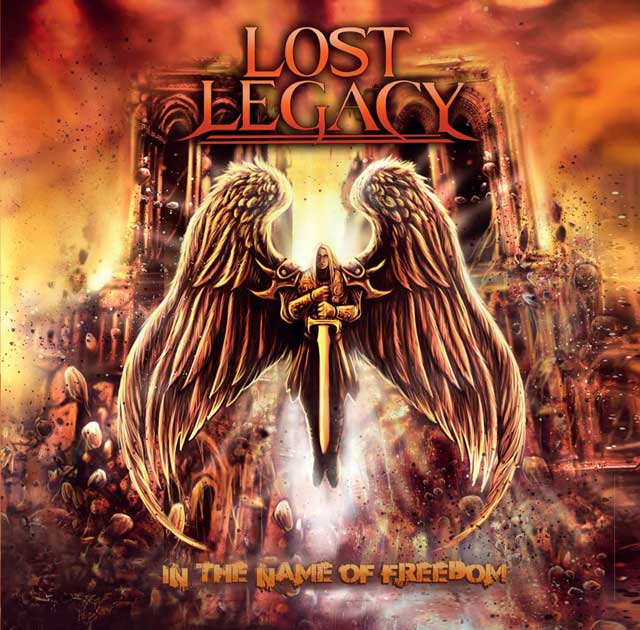 Power/melodic metallers Lost Legacy’s new album In the Name of Freedom drops this Friday (20th) via Pure Steel Records. For those who enjoy Fates Warning, Metal Church, and Testament, will want to give this record a spin. Today (18th), the group has teamed up with Metal Insider for the exclusive stream of their latest offering.

“‘In The Name of Freedom’ is a work of love. When we went into the studio it was clear that we had the drive, passion, and desire to deliver a great performance. AJ did 90% of his tracks on a first take! Most of the guitar tracks were two takes and a couple of punch inns. Dave’s vocals were completed in two sessions. Five months prior to entering the studio, we had pre-production rehearsals for 5 months just to be ready to nail it in the studio.

This album has a polished feel that still has the live feel we wanted to convey as a band. The guitar tracks were recorded through an EVH III Stealth and we cranked the hell out of that amp to make it scream! We worked closely with Tom Tulotta at Coney Studios. Besides being an excellent recording engineer, Tom is an outstanding multi-instrumentalist and he helped us capture the sound we envisioned.

The concept of the album is our way to thank our men and women of the armed forces for their sacrifice. It’s not about glorifying war. But these gallant people give so much and are often forgotten.

We wanted to give our fans and new listeners a hard-hitting metal album that would energize them and inspire them to get through their days.”

Listen to the album in full and check out the group’s track by track guide below:

03) Front Line is the first single of the album. Melodic and driven, heavy breakdown, a band favorite

04) In the Name of Freedom Early Fates Warning feel. Another song that mixes tempos and has heavy drums sounds.

05) Take me Away, soaring vocals, the songs mixes different rhythm patterns and the double bass drums drive this song to oblivion.

06) Enough is Enough, heavy riffs, jungle style drum beats this one is a killer

07) Will You Remember mixes power metal and thrash into an exciting tune that delivers great guitar riffs amazing guitar solos by both guitarists and this song showcases Dave’s vocal range.

08) Rules of Engagement this song has a contagious rhythm and has an early Fates Warning feel. Heavy, Heavy.