It’s fun to expand and explore the mind, searching for more than what we see directly in front of us and, to some extent, there’s a conspiracy theory for just about anything. According to a hilarious YouTube video, James Hetfield’s recent interview on the late Chris Cornell revealed he was laughing throughout his speech and expressed, no remorse. The narrator calls rock stars out for going against the holy bible for having long hair, and expressing homosexuality, as demonstrated by a picture of Lars Ulrich and James Hetfield, seen backstage with Ricky Martin.

The narrator moved even deeper, revealing the number 33 on Hetfield’s shirt being tied with the Illuminati. Later he alleges that artists including Hetfield, Cornell, and Nine Inch Nails’ Trent Reznor mock christ by spreading their arms out on the stage. He continues to discuss satanism by pointing out that the lightning bolts on Metallica’s 1984 album Ride the Lightning are direct references to Satan himself.

A large chunk of the video backs his theory, between members of Metallica being homosexual and essentially, satan worshipers. It is probably one of the most hilarious and ridiculous conspiracy theories we have seen in a long time. 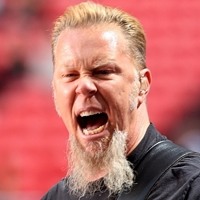