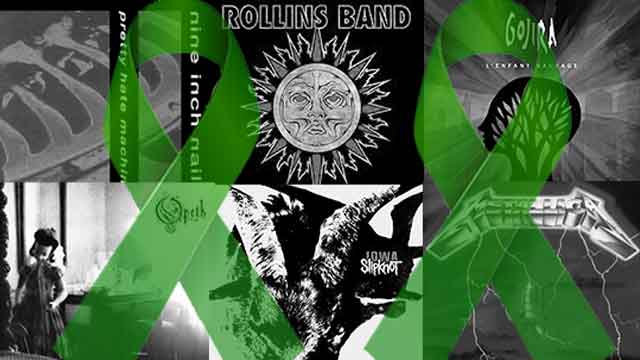 May has been recognized as mental health awareness month since 1949, and this year marks the seventieth year of its annual observance. Within the last few years, the music world has been hit with significant losses including Keith Flint, Chris Cornell, Jill Janus, Chester Bennington, Kyle Pavone, Dolores O’Riordan, and more due to suicide, addiction, or mental illness. Suffering from mental illness or going through a rough patch is never easy as it’s OK not to be OK. Disturbed have recently launched a resources page for mental health and other artists including Chimaira vocalist Mark Hunter have opened up about their experience with the subject.

With that being said, we decided to share a few songs or albums that’s gotten us through difficult times as music can be an excellent remedy to feel better.

High School is an awkward time. This record made me feel less awkward. This record is the apex of Rollins’ career. He never topped The End of Silence and he never will. Every song is about the hard realities of living and Rollins puts such an intense, positive disposition on things like not believing in yourself, confronting past demons, and the realities of poor relationships. I still listen to songs like “Low Self Opinion” and “Tearing” when I’m in the dumps – decades later.

The music, of course, on this record is insane. Andrew Weiss on bass, Sim Cain on drums and Chris Haskett on guitar. Lightning in a bottle.

Zenae Zukowski: I’ve been surrounded by death and challenges since as long as I can remember and one of the reasons why I write about metal is because it’s saved my life during troubling times. Whether you are suffering from depression, anxiety, mental illness, or experienced loss, a break up to any form of abuse, here’s a few songs/albums that has helped me over the years (not everything is metal):

Metallica – “Fade to Black.” This is the ultimate song I go to when everything turns black in my life. To be blunt, I must have listened to this song nonstop during the time I lost my father.

Slipknot – “Surfacing” or “People = Shit” during the days I don’t want to be around people.

For those who lost a friend or family member via suicide, I find it soothing to listen to a song that reminds you of that person. I lost a friend from suicide back in 2014 and have many moments going back to BoySetsFire – “My Life In The Knife Trade” or most recently after losing another friend, Tiffany “I Think We’re Alone Now”

Other songs/albums:
Anything by the Cranberries
Paradise Lost – “Faith Divides Us Death Unites Us”
Type O Negative – “Everything Dies”
The Gathering – “Saturnine”
Epica- “The Essence of Silence”
Epica – “Design Your Universe”
Cradle of Filth – “Born in a Burial Gown”
Jack off Jill – “Angels Fuck Devils Kiss”
Marilyn Manson – “The Nobodies”
Helloween – “Mr. Torture”
Helloween – “The Departed”
Garbage – “I Hate Love”
Machine Head – “Message In A Bottle” (Police cover)
The Pixies – “Where is My Mind”
Oceans of Slumber – “The Decay of Disregard”
The Smiths – “Heaven Knows I’m Miserable Now”
A Perfect Circle – “The Doomed”
Linkin Park – “Numb”
Ill Nino – “Liar”
Despite that my musical taste has expanded over the years, I tend to fall back to songs from my younger days during dark times (I think I already forgot to mention several more…Pink Floyd, Joy Division, NIN).

Mark Zapata: L’Enfant Sauvage by Gojira helped get me through a period of time when I had a rough commute each day. It kept me sane at a time when I absolutely hated my job and getting there was an absolute bitch.

Gojira’s From Mars to Sirius helped me keep it together when I spent a month away from my family working 8 hrs away from home. “Backbone” and “The Heaviest Matter of the Universe” were on constant loop as I worked construction doing disaster relief.

Gojira is that band for me that could help me shut the world out and keep me grounded when things around me were far less than ideal.

Matthew Brown: For me, Black Sabbath, Iron Maiden, Metallica were the golden trio in high school. Above all else, they gave me what I needed most at that time: a sense of belonging. Whatever happened, whether it was a shit day of school, problems with friends and family, or just feeling lonely, it was comforting to know that when my head hit the pillow at night, I could put on my iPod and listen to those three bands to put my mind at ease.

Sometimes I just need straight up depressing music to help me work through whatever I needed to work through. Porcupine Tree is usually my go to; Steven Wilson just excels at melancholy. I must have had The Incident on repeat during most of 2010. Opeth’s Damnation album is another hauntingly gorgeous album. Surprisingly, I learned a lot on Ghost Bath’s Moonlover when it came out in 2015. The shrieking wailing vocals paired with tremolo picking proved to be very cathartic.

Other non-metal artists that have helped me through rough patches include Iron & Wine, Coldplay, The Beatles, and Howard Shore’s score for The Lord of the Rings.

Bram Teitelman: Teenage angst, much like teenage love, is a feeling of intensity like no other. Everything feels way more important than it actually is and takes on an emotional resonance that’s unparalleled. That sadness and depression (or happiness and joy) is multiplied exponentially by the music you’re listening to. My late teens were helped out by two pretty disparate albums.

Getting your heart broken is the worst, but listening to music that captures that heartbreak lets you know you’re not alone in that world. While the misogyny of Type O’s first album hasn’t aged all that great, it’s still a stunning work of anger, depression and rage that landed between the hardcore band Carnivore was and the gothic metal that Type O would perfect on their sophomore album, Bloody Kisses. A loose concept album based on a true story about Peter Steele finding out his girlfriend was cheating on him and attempting suicide, it obviously didn’t end like the album did (Steele killing his ex and her lover). But like the blues, hearing about other people’s misery makes yours better, and the band’s dark wit gave the album a gallows humor that made however much sadness over my own romantic failings seem not quite that bad.

Does this count as metal? I’d think it does, considering “Head Like a Hole” made its way to Headbangers Ball. Like the Type O album, this was a new sound that enthralled me as soon as I heard it. Having been a fan of metal and synthy stuff (Depeche Mode, etc) in high school, this album combined the two in a way that I hadn’t heard before, but the songs were there. I guess also like the Type O album, lyrically the album had two moods (the “fuck you” attitude of the aforementioned “Head Like A Hole” and the emo-ish angst of songs like “Something I Can Never Have” and “That’s What I Get”). Hearing equal parts anger and sadness channeled into songs as well-written and produced as Trent’s first album definitely helped get me through some trying times.

Chris Annunziata: During the hard times in life, metal has always been there for me. Especially in middle school and high school, where you feel alone and ostracized for having different interests. MudVayne’s “Under My Skin” got me through my raged filled days when I just didn’t want to deal with anyone at school, as well as Slipknot’s “My Plague.” I would listen to those songs countless times walking down the hallways. Tracks that helped me through the deaths of loved ones were MudVayne’s “Death Blooms”, Opeth’s “Hope Leaves” and Slipknot’s “Burden.” “Hope Leaves” just sounds so depressing and lost. It’s perfect and exactly the song I needed at my time of need.