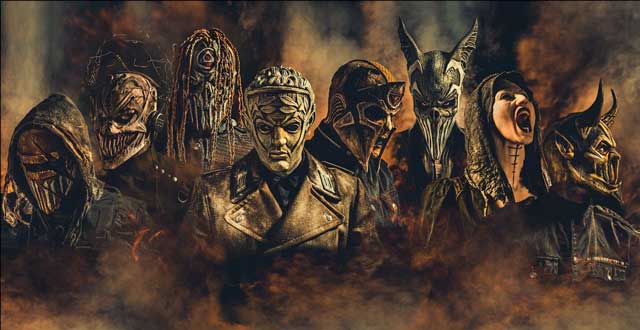 Mushroomhead have been through some changes in the six years since they released their last album, 2014’s ‘The Righteous and the Butterfly.’ In 2015, vocalist Waylon Reavis left the fold, followed by original vocalist Jeffrey “Nothing” Hatrix and guitarist Tommy Church in 2018. It also saw the additions of new vocalist Steve Rauckhorst and guitarist Tommy “Tankx” Shaffner, as well as the promotion of Jackie “Ms. Jackie” LaPonza to full-time member, making female vocals a prominent feature of their sound for the first time ever.

Reenergized, Mushroomhead is now getting ready to release their eighth studio album, ‘A Wonderful Life,’ this Friday (June 19). Marking their Napalm Records debut, the album was produced by drummer/mastermind/sole original member Steve “Skinny” Felton and mixed by Matt Wallace. The band has already released two powerful singles from the album, “Seen It All” and “The Heresy,” showcasing a more melodic, heavy new sound.

We spoke with drummer and sole original member Steve “Skinny” Felton to discuss ‘A Wonderful Life,’ how the band’s new vocalists add to the band’s sound, and the timeliness of the “The Heresy” music video.

What was the writing and recording process like for A Wonderful Life?

This record was a bit different actually. We did a lot of writing and arranging on the road. We basically started in December 2018 and finished in January 2020. Over the course of 18 months 4 separate tours. One of the tours was in the UK and we were fortunate enough to do some recording at the Legendary Abbey Rd., Studios.

Did the pandemic add any additional roadblocks to the process of getting out new music?

No the music was pretty much finished by the time the pandemic actually kicked in. The biggest hurdle was trying to complete the videos for the deadlines set in place. If you look closely at the ‘seen it all’ video, you’ll notice almost everyone was shot separately and then edited together.

It’s been six years since you released The Righteous & The Butterfly, the longest gap between albums the band has had. In that time you’ve brought on two new vocalists, as well as a new guitarist. How has the band dynamic changed since their additions?

All three of those additions add a huge dynamic to not only the stage but the recordings as well. There’s definitely more options now than ever before. The new singers bring new possibilities that we never had in the past. The ability just wasn’t there before.

Though Jackie LaPonza appeared on The Righteous & The Butterfly, this is the first time the band has officially had a female vocalist. How do you think the addition of female vocals has enhanced/broadened your sound?

The addition of Miss Jackie brings a huge dynamic to the sound. Her ability to harmonize and layer vocal stacks with Mr. Rauckhorst is incredible. Her voice adds emotion and texture to the sound over all.

The sound of the new music seems a bit more melodic than some of your previous work. Are these kinds of shifts just a natural progression or a conscious effort to try something new?

Both actually… With the addition of the new singers, it was definitely a natural progression as well as a conscious one . As I said before, previously we just didn’t have the ability to experiment in this way. Before this album, we were pretty limited vocally.

So we tried to keep that in mind and make space for the vocals to be loud and proud on this album.

You just released the video for “The Heresy.” You were quoted as saying about the video “We wanted to do something a little more thought-provoking this time around. With the current state of the world going to Hell in a hand basket, we wanted to incorporate something that delivered the swift transportation of certain doom. The manufacturing of war power and the stockpiling of faith. The willful destruction of the past, the future, and ultimately humanity.” There’s no doubt that tensions are heightened even further now with the pandemic and the recent protests. Expanding on your words, why do you feel this moment was the perfect time to put out a video like this?

It’s kind of strange and ironic actually. A lot of this material lyrically was written over a year ago, but with the current state of the world, it seems like we wrote it last week.