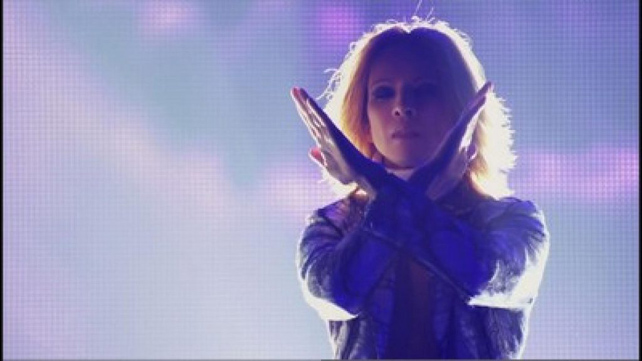 X Japan recently had their first US show in four years at Coachella. The group returned to the stage on April 14th and 21st and surprised the crowd with holograms of late members Hide (guitar) and Taiji (bass) as well as having Wes Borland (Limp Bizkit) and Richard Fortus (Guns N Roses) join them on stage. Despite allegedly being previously banned from the festival, Marilyn Manson managed to make an appearance to perform “Sweet Dreams” with the band’s Yoshiki.

During Yoshiki’s busy and hectic schedule, we were lucky to catch up with him to discuss his health, the band’s documentary We Are X, their upcoming album, the love for David Bowie, and more.

What was it like for X Japan to return to the states and finding yourselves the only hard rock/metal band headlining Coachella on your first night?

Haha, it’s actually a big pressure. It was a challenge, especially you know, we were playing the same slot as Beyonce.

Exactly. There must have been a lot of pressure for you guys but I did hear good things about the performance.

Yeah. I mean it wasn’t bad, but we had a lot of equipment issues. But, overall  it was good.

You also had holograms up of Tajii and Hide, how was it for you to see that?

Yes. It’s kind of a little bit strange but the late members, Hide and Taiji, it was their dream to go overseas. I mean of course that was my dream too. ​But, somehow I wanted to bring them to this festival. So then we decided to do the holograms. But it was not easy. If it was a Saturday night of just our show or something but, we had a lot of preparation for everything, and changing the set in ten minutes to do this kind of program was extremely difficult but, somehow we did it. (laughs) Yeah.

They (Taiji & Hide) were somehow with you on stage which is beautiful and heartfelt.
Yes.

You’ve also gone through a lot of surgeries including last year’s emergency cervical artificial disc replacement surgery, what is it like for you now to perform without headbanging?

​Ah, that’s a good question. I’ve been headbanging and drumming for over 30 years or longer, so it was hard not to headbang. But you know, I wanted to play drums because I could, as hard as I could, so yeah it was very strange for me not headbanging and playing drums. But, headbanging is not good for your health. (laughs) You know, coming from me. I had neck surgery twice, almost paralyzed, so I tell people not to headbang anymore. We can find a better way to rock.

​But, it was mostly a big challenge to play drums after the surgery but, I feel pretty good. I’m still trying to get used to the artificial disc on my neck. I still cannot do normal activities.

You know it’s rock’n’roll. I mean the other guys, you know try to patronize it more but, I say I’m not gonna headbang and I’m not trying to down my set as much as I can, so, yeah.

I admire your determination to still rock.

Can you tell me about the progress of the We Are X documentary?

About 10 years ago, my agent in America, said let’s talk and said you should create your own story, a documentary, because our stories are pretty dramatic.

​Then I said, no I don’t wanna do it because it’s too painful. You know to open that door to the past. We were talking and eventually supplied our documentary, our story, may be able to help people’s lives and give people courage to live on.

​So, that was a good reason for us to create the documentary. Eventually we decided to do it and yeah, that’s how everything started.

​It’s admirable that you keep everyone who has passed relevant and part of your music as you addressed in the film with, ‘the pain never goes away.’ I wanted know what helps you push forward throughout all of the sadness that has happened.

When I play on the stage regardless of a  hologram or video, I’m playing with those late members inside my heart. I have to say, my fans are supportive, they gave me a second chance. When Toshi, the vocalist, got brainwashed, and the guitarist passed away, I thought that was the end. But, my fans supported us unconditionally for over 10 years and that’s why we got reenacted and came back.

​As long as we have our fans, we just keep going.

I believe the film mentioned something like this, you said how the fans are another part of your family.

Yeah that’s why we call ‘We Are X’ you know, not only us but, including our fans. The X means an infinite possibility, basically, you are saying nothing’s impossible. So that’s why we are saying ‘We Are X,’ let’s conquer anything and there’s nothing we can’t overcome.

Is there anything you can reveal to us about the upcoming record?

​Yes. I mean nobody’s going to believe me anyway but 99% is done, recording wise. We just have to mix it, and, I would say, it’s an evolved version of the rest of our music. We don’t want to keep repeating what we created so, of course I would say, it’s very edgy, heavy, some songs are heavy and some songs are very beautiful, so … they’re also somehow I wanna bring rock music to the mainstream so, it’s gonna be like another challenge to the music scene.

There was a reason it took over 20 years but, I’m pretty confident.

It has been a very long time since you released an album with X Japan. What convinced you to work on a new one?

About 10 years ago when we reunited. Basically we had over 10 years of a break. At that time, we weren’t sure if we should keep on going, that was a slump, you know is this a one-time reunion show or not? But because we had that, we did a reunion, then we found out there are fans around the world. Then it was, let’s do a world tour.

​So we started doing a tour little by little, then we started talking about might as well create a new album. So, yeah. That’s the reason, I think.

I read that you became friends with Marilyn Manson over the years through enjoying David Bowie’s music? I was wondering, if you’d ever consider recording a David Bowie cover with Manson.

That’d be amazing. I’ll tell him, maybe, tonight. I mean we both love David Bowie. So, yeah, why not, I would love to do that. Manson has an amazing voice so, that’s a really good idea.

And if you could pick, which Bowie song would it be?

Good question, I don’t know. I mean, I love his discography so much. But, for us to cover, “Heroes,” I don’t know, “Space Oddity,”  there are so many great songs from David Bowie.

There’s a lot of people out there who believe rock and metal is slowly dying as, you noticed you headlined against Beyonce at Coachella, what’s your take on people thinking that this genre of music is fading out?

There’s amazing bands around the world. They are creating amazing music, so we are glad to be one of them. I’d love to keep on rocking and then have rock, metal or or hard rock return to the mainstream. Then please support us too, I’ll support them too. That’s it. You know, stick together then, let’s bring this amazing music to the mainstream.

Are there any more Japanese metal bands that remind you of an earlier X-Japan?

There are some but I’ve been traveling all over the world and not really concentrating on listening to, I mean I have a bunch of friends but I need to after the album’s done, I want to start checking the Japanese music scene too.

Check out the trailers for X Japan’s We Are X and order the doc here.