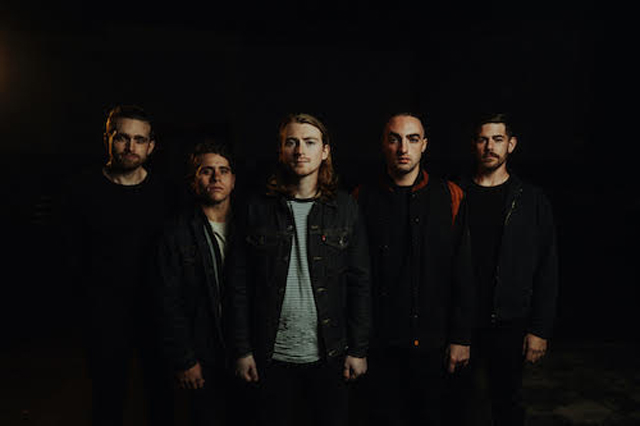 On June 5th, Currents sophomore effort, The Way It Ends will be released via Sharptone Records. The album holds a dark theme while maintaining a heavy balance between metalcore and progressive melodies. We caught up with vocalist Brian Wille to learn more about the record, virtual shows, and the uncertainty of tours in 2020 due to the COVID-19 pandemic.

How would you compare the recording process for The Way It Ends to 2017’s The Place I Feel Safest?

So they’re pretty different. Our debut album we recorded with Andrew Wade at this place called The Audio Compound in Winter Park, Florida, and it was a traditional studio experience. We went down there and stayed in Florida for a month. We’re from Connecticut, so it was kind of crazy for us, all the heat and everything, but we stayed down there in the studio for a month and fine tuned the songs, tracked everything while we were there, and then we went home, and this time around, we did something a little different. We did something we tried on our EP, I Let the Devil In, that we released after The Place I Feel Safest, where we kind of did everything from home, and our guitar player, who’s the main kind of writer and composer for the band instrumentally, he was pretty adept at recording. So we had fully flushed out songs already. So what we decided to do was just have a producer come to us, and we worked with them from home, moved around our pre-pro stuff in a more comfortable setting and then kind of fine tuned everything to where we liked it, and then our guitar player, Chris, tracked his guitars at home and then myself and the producer, his name is Ryan Leitru, went over to another studio to go record the vocals and then sent it all off for mixing and mastering. So where we had the kind of traditional studio experience for our debut record, things were done a little more independently this time around.

For this time around, were there any songs for you that were more challenging to put together?

Yeah, definitely. We had a few that came to be a little bit punishing. Some of them came out naturally, but others, mainly the song “Second Skin” and “Poverty of Self,” those two I think everybody can agree were the real tough ones, because we just had a lot of parts that we wanted to nail and get right that we didn’t have yet, and I would say it was agonizing. It was kind of a grueling process of trying to get them right.

“Poverty of Self,” that was one of the earlier songs released. Looking back, can you discuss the music video for it?

Yeah. So the music video is a concept that I came up with and brought over to our friend Burke, who works for King Wolf Creative. That’s kind of the moniker that he works with, and was really about it and added a lot to it, I feel like. The idea is that we have this woman that is basically summoning something. We’re not really sure what it is, but at the end of the video, she draws blood and it goes into this kind of bed of flowers, and now we are seeing all of this dark and stormy imagery, kind of like a storm is coming. So she’s very clearly set something in motion that maybe she didn’t intend for, and now we’re here kind of to the events that you see on the front cover of the record.

I read there’s a lot of dark themes on this album, can you describe some of the subjects?

Yeah. Funny enough, a lot of it is about distancing. Not in the way that we’re doing right now, obviously, but just separating yourself from situations that aren’t benefiting you or maybe you feel like you’re not benefiting somebody else by being involved in their life. So it’s a lot of separating ties from certain things in your life, the feelings of being abandoned, of being lost. There’s themes of searching for your identity and purpose. There’s themes of negativity and always looping back to it as your main focus. There’s a lot going on. It’s somebody who is trying to find purpose, but there is something inherently broken. It’s a journey of trying to fix it.

It’s a very heavy album from the beginning to end, and I wanted to ask, with the current state the world is in now, what plans do you guys have, if any, to virtually celebrate the release?

We experimented a week ago with doing a live stream. We did a little Q&A thing with our friends at Sound Rank Live. They helped us facilitate this really cool Q&A, hangout session. We got all our faces on screen and people were able to ask questions on a few different streaming platforms – Twitch, YouTube TV, your Facebook, your Twitter, all that stuff. So we thought that was really cool. We’re probably going to explore something like that closer to the release. We’re planning it out right now. I know there’s a lot of talk about people doing virtual concerts. That could be a cool thing. We just found out we have some friends from home that are testing that out right now to see if it’s a doable thing and we could maybe do it close to home, hopefully. If we can kind of get to play those songs, it would be nice.

I know, everybody’s working a lot on reconstruction. There’s also been a lot of confusion on when concerts are going to resume. Some people say the fall, others say 2021, some 2022. So much uncertainty is happening right now, and I was curious, in your opinion, when do you think it’s safe to tour again?

It’s funny, right? Because it’s such a strange time that we’re in right now and there’s really no way of knowing. I think that people are going to start trying to do things as early as they can possibly do them. I know people are cropping tour dates up now for the end of the year, will that happen? I really don’t think so. We have some stuff that’s lined up for the end of the year that is, in my opinion, probably not going to happen, especially international touring, because everybody’s in such different places around the world. Maybe this place has eased up their quarantine and people are going back to work, but they don’t want people from America coming into the country because we’re still very much in it. And so I think it’s going to make international travel really iffy. I’ve heard talk of doing very limited capacity shows, have a room that fits a thousand people and then put 250 people in there and have it be everybody’s all separated, but then where’s the fun in that? I see it being a process, but the sooner that we innovate and find a way to stop this, then I think that the large gatherings will happen much sooner.

It’s definitely a confusing world we live in right now. We all miss our lives and live shows like that, but it’s also about people’s safety, and it is very interesting to see how it’s going to pan out and that you have a realistic mindset like, okay, you’re prepared to tour at the end of this year, but you’re also prepared for it not happening.

Yes. I’m ready for the disappointment.

It’s also a good outlook because each state in America has different rules too, on top of different countries. If you’re from New York, you can’t go into Florida Who knows how long this is going to last. So that’s another take, to know which bands are going to tour, where and what the shows are going to look like.

I’ve been living in a bubble, so it’s insane to know what’s happening outside of it. To bring back a positive spin on things, is there anything else that you want to say or add to your fans about the new album?

It comes out June 5th. You can preorder that currentspecial.com. You can also preorder it from the Sharptone Records website. If you are from Europe or the UK, you can get it from Empiricon. There’s different packages and vinyl variants on all the websites. So there’s plenty of options. Even if you like the Empiricon stuff, you can get it shipped to the US. They have a U S option. We have a weekly newsletter that we’re doing. You can sign up for that on our website, and other than that, yeah, I hope everybody’s staying safe and washing their hands and wearing their masks and all that fun stuff.