Paradise Lost just concluded their North American tour on Saturday (20th) at the Glass House Concert Hall in Los Angeles, CA. Due to unforeseen circumstances, the UK doom/death pioneers were forced to cancel their final show on the 21st in San Francisco. Earlier this month, we spoke to drummer Waltteri Väyrynen during their NYC performance. At that time, it was the group’s second night of the trek as Väyrynen expressed his excitement to tour with the group for the first time in the United States. Waltteri also discussed how he officially joined the band back in 2015, the group’s overall success, Medusa, his favorite experience with Paradise Lost thus far, and more.

Looking back on the band’s 30-year career, is there anything you think the guys wish they could have done differently?

And how has your journey been so far with the group?

​It’s been great. I mean, they’ve been one of my favorite bands since I was a kid, so it’s obviously a dream come true to join the band. The last three years have come past like this. It’s crazy. It’s really good to be back in the states for our headline tour, so really looking forward to it. This is the second show on our tour.

What convinced the band to remix 2001’s Believe in Nothing after all of these years?

Are there any other albums, even from when you were a fan of the band, that you wish could have had the same treatment?

It’s been six years since you guys toured here last. How was it for all of you to decide on a set list between the last two albums as well as celebrating 30 years of Paradise Lost?

It’s very hard to come up with a set list when you have 15 albums, but we’ve tried to include something from every era. But obviously, the main point is to play the latest albums as well, right? We’re playing three or four songs, three I think, and then two or three from other album, it’s mainly the last albums with a mixture of the old songs as well. Something for everybody.

​Yeah. And now that Medusa has been out for over a year now, what do you think about the turnout?

I’m very pleased with the album and the production, especially. I mean, Gomez is such a great producer. He’s a great guy to work with, really easy going. His way of looking at the process, I think we all kind of share the same view. He didn’t use any sound enhancements or drums and he’s all natural.

How was it when like for you when Paradise Lost asked you to join?

I was in Vallenfyre, Greg’s side project, death metal side project. I joined the band in 2014 because they had an open search on Facebook saying that they need a new live drummer to fill in some of the shows because Adrian (Erlandsson) was playing with a band back then and was too busy with At the Gates and they got the alternate from these other bands so he couldn’t do the shows. So, I sent an application. Did some videos of my playing, and saying that I would be very interested to join them. Then, Greg got back to me like two days later asking if I wanted to join the band. ​And yeah, A year later, Paradise Lost was in the same situation. Adrian was getting more and more tours with At the Gates, and because he’s… I mean, At the Gates is his main band so, obviously, he had to stay with them. ​And yeah, as far as… I was meant to play only a few shows with Paradise Lost, maybe one tour or something like that. I ended up joining as a permanent member. That’s how it kind of went.

Are you guys working on a new album yet?

Not yet, but I’m pretty sure we’re going to start working on the new album next spring maybe. I wouldn’t say it won’t be out before 2020 though.

And did you guys have any trouble getting into the States?

No, we didn’t have any problems. It’s always a very long difficult process with the Visas and stuff. It takes a lot of time to prepare everything. It’s completely different than touring in Europe. Yeah. It was all good for us. Happy to be here.

What would you consider the next generation’s doom metal bands?

​I really like Pallbearer just because they supported us on the last tour. They’re from the United States as well.

For fun, and you have two different perspectives from being in the band and a fan, If you could make a movie out of any Paradise Lost album which one would it be?

​I think it would be obviously the first one (1990’s Lost Paradise). It would be cool to see how they put it all together and how the band started. I’d like to see that.

That’s a brilliant idea. I believe you guys are touring for the rest of the year but, what does Paradise Lost have planned for 2019?

Yeah, this year, this tour, and then we have November, I think. Then, we go to Greece and Israel in December. Next year, there’s not that many plans yet, but I think it’s going to be mainly festivals and one-off shows. I’m not sure if there’s going to be any more full tours. There might be.

Would you consider going back to 70,000tons of Metal?

I hope so. It would be really cool to do 70000Tons of Metal. We did that about two years ago. It was one of the best festivals. I mean, if you can call it that, but it’s wonderful. One of the best experiences I’ve had with the band. Yeah.

Is there anything else that you would like to say to your fans?

I think thanks for the support and I’m really looking forward to this tour. It’s my first tour with Paradise Lost in the States. 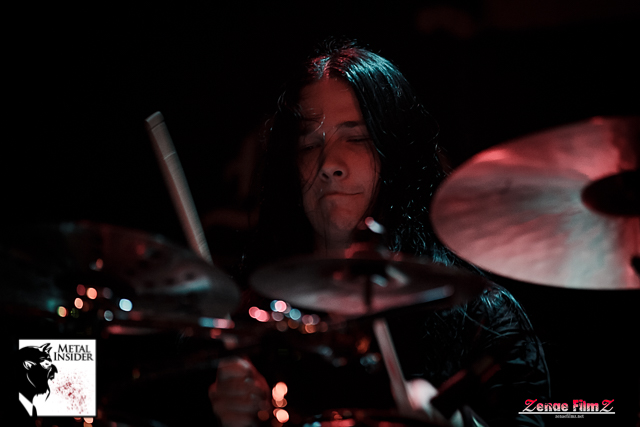