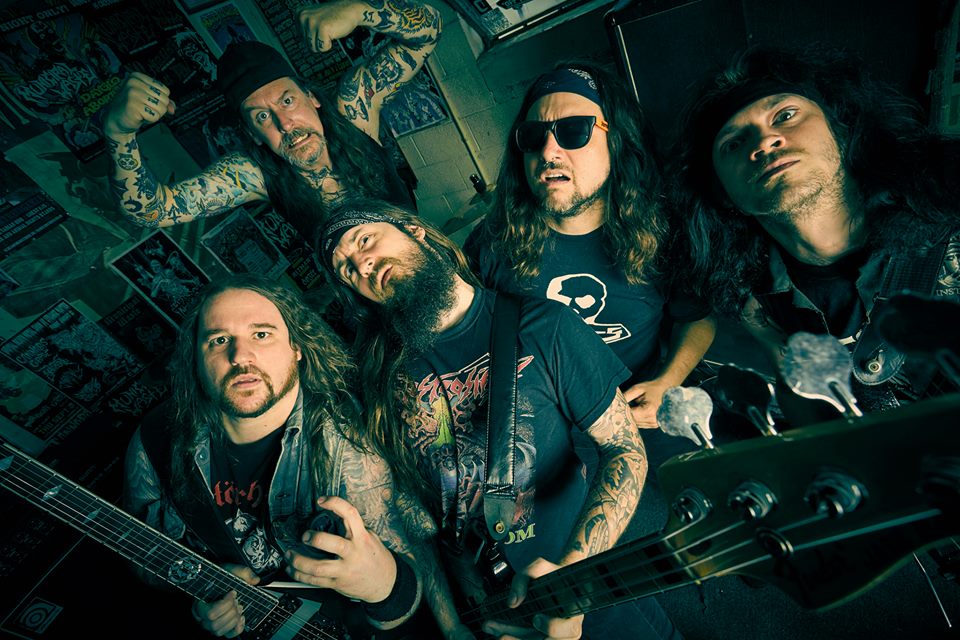 You need to look no further than GWAR or Lamb of God to know that Richmond, VA is a town that cultivates creative people that like heavy music. Municipal Waste and Iron Reagan frontman Tony Foresta is among them, as are Mr. Pickles creators Dave Stewart and Will Carsola. With Municipal Waste hitting the road with Exodus stating this Thursday (22) in advance of the Adult Swim show’s third season (starting 2/25) for the Mr. Pickles Thrashtacular tour, we caught up with Foresta about the tour, Richmond, and the long history the band have with the creators of the twisted show. Catch the tour dates below, and also sign up for a chance to win one of five Mr. Pickles prize packs featuring tour-exclusive merch, a CD, and more below the article!

How do you feel about being on the Mr. Pickles Thrashtacular tour?

You’ve toured with Exodus before right?

We’ve played a bunch of festivals with them. We get along very well with them, almost too well! I’m slightly nervous about how my liver is going to do on that tour, but we get along great with those guys. They’re a huge influence on us too, so its really neat to be able to be in a band and tour with people you look up to as well as friends with you know.

Yeah, they’ve been around for 35 years now –

Was this tour happening regardless, before Adult Swim and Mr. Pickles got involved?

No. They came to us and we were like ‘well yeah.’ We’d always talked about it. Like I said, we’ve been friends with the Mr. Pickles guys. They did the first Municipal Waste video. They had a little group called Day By Day and they’re from Richmond Virginia where we live and they filmed the first Municipal Waste video ever, for that song “Unleash The Bastards.” So we talked about it for years, that we wanted to collaborate somehow and figure out something cool to do. I didn’t think it was going to be a tour but when we were approached with it, we moved our schedules around to make it work, because had to do it. It was just too cool.

Is this kind of indicative of the Richmond scene? Like all the, all the like-minded fucked up metalheads find each other?

How familiar with the show Mr. Pickles were you?

It really is.  It’s like ‘wait a minute, this got greenlit?’

Its weird that they can put that on TV you know? It’s funny, I heard the voices and it just cracks me up because I can see those guys doing those voices. It’s really funny. They also get like pretty crazy celebrities on there too like Brooke Shields is on there and Tracy Morgan did one.

Have they approached you to be on it yet?

No, no, my voice sucks. I’m just kidding (laughing). I like how I said that while my voice cracked. I literally just got out of band practice a little while ago so my voice is like blehhh. We had just been on tour. We want to play a lot of new stuff. We are working on switching up the set. Kinda gonna bring some new shit out there. So we are have been trying to cram as much practice as we can between tour we just did and this one.

Are there going to be any new, new songs that haven’t been played live yet?

Yeah, there are two songs we’ve never played live which are on our last album. But it’s cool because a lot of our sets we’ve done in the past have been heavy with early shit and we do a lot of early stuff. But we want to get the new songs out there because they are fucking awesome and people haven’t really heard them. So we are kinda doing that more. Usually we’ve been playing the same set in one variation or another for a really long time and only doing one or two new songs. We kinda just flipped the set around and are doing something completely different, playing old shit that we never play, and bringing back old shit, and throwing some new shit in there that we think is strong for a live show.

This tour is great combination of old school thrash with Exodus, and I guess you would fit in with the newer school  of crossover. Do you feel like there is a renewed interest in it?

It’s weird, we were like the first band who brought this shit back. 10-12-15 years ago – goddamnit we’re old now. I mean it really started popping off ten years ago. I feel like we helped carry that torch for a while. We are kinda the band who brought it to the older people. We were kind of a mix of both. I don’t know, I’m stoked to be a part of it. I’m glad people payed attention enough to like, maybe i think it even kicked some of the older guys in the pants a little bit, to get them out there writing again.

It taught a new generation of people that hardcore and thrash doesn’t have to be necessarily about aggression and it could be fun too.

Yeah, and it’s good man, we took like a five-year break between albums. This album and the last one.

Which is nuts in this day and age.

Yeah it is nuts, I can’t believe it’s been that long. But it’s cool though to see that people are still fucking into it. You know? The last record we did I think, sold better than any album we’ve ever done. So yeah it’s still there, people are stoked on it.

Do you see new fans showing up?

Oh yeah! Our fan base is such a strange thing because we get the really young kids and then we’ll get like the old heads that come out. It’s all across the board, it’s punk, it’s metalheads, its hardcore kids, straight-edge kids like us. We sing about drinking all the time, its wild. It’s fun I love it. That’s the point of being in a cross-over band you know? We don’t give a shit everyone is welcome to the party as long as you’re not a fucking hateful idiot.

I guess I’ll ask a little bit about Iron Reagan as well you have a split EP out, right?

Yeah, yeah we did a split with Gatecreeper. Honestly, I almost like it better than the last album we did. It’s pretty strong material, it’s only five songs, but it’s like hammers. I don’t know, its really good, I’m proud of it. Then the Gatecreeper side rips too so I’m glad to see that we are still putting out strong material after we’ve been putting out shit so much over the past four, five years. Iron Reagan’s been putting out like two albums a year and shit. But we kind of buckled down and it came out really good.

How do you split your time between the two bands? I mean obviously, not putting out an album for five years could help with that a little bit.

Waste writing-wise, it was getting a little bit frustrating. We wrote an album and we all just kinda sat there and was like ‘this isn’t good, we aren’t happy with this.’ And we scrapped it, we could have put out a shitty record between those five years but what’s the fucking point? It’s our sixth album, why would we put out a shitty record for the sake of putting out a record? A lot of bands do that, they feel like they gotta put out a record every two years or they’ll be forgotten. Rightfully so, its so fast these days, kids and people, they get something and then they are over it. It’s wild, it’s a lot different from how it used to be but I don’t know we just- I just couldn’t live with myself if we put out a record that we weren’t satisfied with. You know what I mean? So we just said fuck it and just waited and re-wrote it, fixed the songs that we didn’t like. I’m really happy, I think that the Slime record, I like it better than the last few records that we’ve done. As far as sitting down and listening to it, I think it holds up and I know it holds up because I’ve been listening to the fucking songs for two years.

Just crapping them out (laughing). No, no Iron Reagan is just wild, young, and hungry right now. The guys who are writing in that band are just fucking, are feeling it. It’s cool, its two different beasts and I’m having a lot of fun with both of them right now.