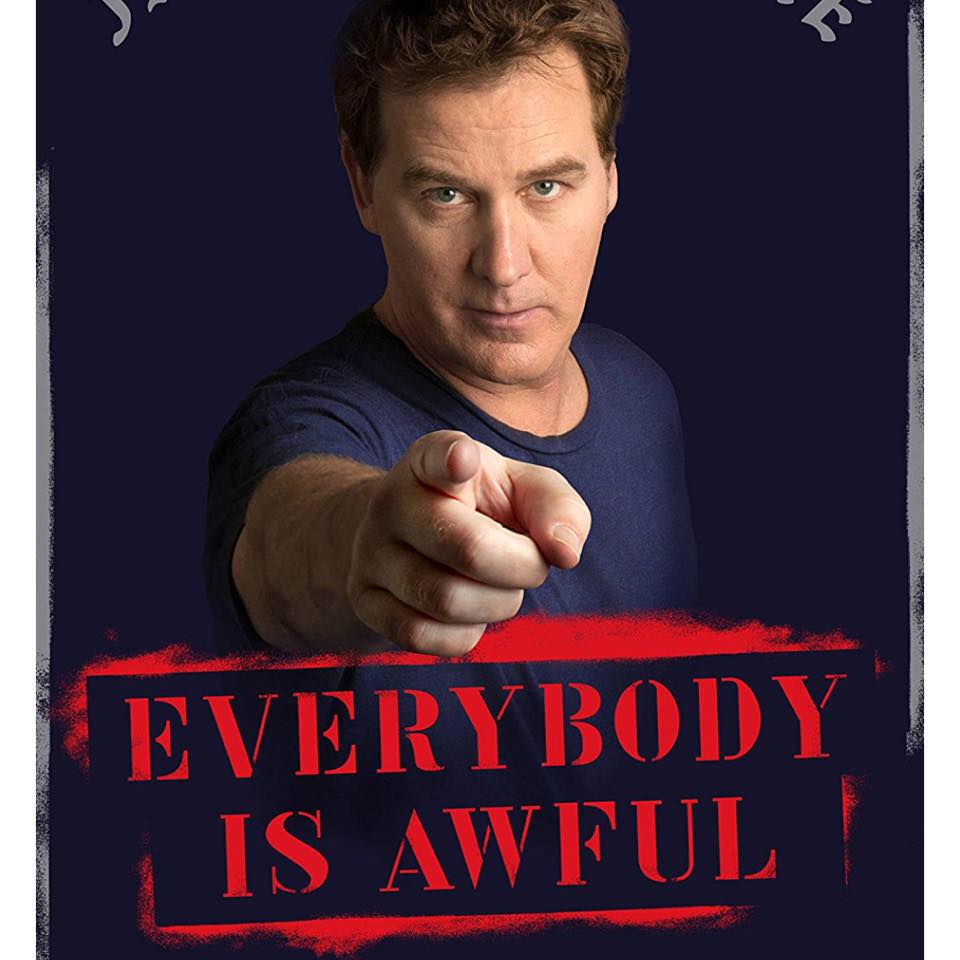 Any band will tell you opening for Slayer is a tough gig, but imagine tackling this task with just a microphone and some jokes. This has to make playing the roughest of comedy clubs seem like making a bowl of cereal. Perhaps it’s experiences like these that have stand-up comic Jim Florentine appear so comfortable and fearless on-stage. His low register gritty voice is as instantly recognizable as Lemmy’s bass tone. His love of metal has been bleeding into his work long before co-hosting VH1 Classic’s That Metal Show for 7 years. Just take a look at his Sabbath-inspired artwork for his Terrorizing Telemarketer’s Volume 4 album, or if you really wanna make it a night, his pranks backstage at Ozzfest on the hidden camera DVD Meet The Creeps 2. But beyond that it’s his over-all attitude, mischievous antics, and zero tolerance for bullshit that embody the heavy metal spirit. This has long been evident in his podcast, Comedy Metal Midgets, where he’s made a regular practice of brutally ripping apart shameless Facebook posts and obnoxious Yelp reviews in rants laced with genuine distain with a deadpan delivery. Everybody is Awful (Except You) is Florentine’s new book, and a collection of such rants that puts the wild world of social media on blast. El Prezidente recently caught up with the comic to discuss the book as well as some heavy metal headlines like final tours and Tommy Lee’s fat lip.

You can check out the entire chat here

We’re talking today because your book is out, you’re an author. Everybody is Awful (Except You) is your new book. How’s it doing? Tell me a little bit about it.

It’s doing good, it’s basically based on my podcast where I do a bunch of rants mostly on social media, it’s in book form and it’s been out a couple weeks. It’s out there in book stores and on Amazon and all that stuff so people seem to be enjoying it.

I like the podcast, you must get a lot of people sending you stuff like the Facebook posts and the Yelp reviews I imagine you have a wealth of material.

Oh yeah, my podcast is based on that, anything awful you see on social media just send it to an email address and I basically just riff on that kind of stuff and that’s where the book idea came from.

I was listening to a Yelp review episode, obviously anybody who’s leaving these multiple Yelp reviews has never worked in a restaurant and knows how difficult it is.

Yeah or had a business on their own where it’s not too cool to be trashing your business online where you can’t get rid of that stuff, it’s there forever. You can just go somewhere else. Look if you get screwed over by some company or some guy that’s gonna do an extension on your house and rips you off for 20 grand then I could see something like that, but if your mozzarella sticks were cold at Applebees, get over it.

Not a big deal, but I guess in some people’s lives it is. The Facebook stuff is outta control. I’m on Facebook sometimes but I don’t know where they find the hours to invest, people just comment back and forth all day. I guess they just have office jobs where no one’s paying attention to which websites they’re on.

Yeah and plus you know with smartphones it’s basically in your hand at all times, if you have one second where you’re bored you’re scrolling through your Facebook page to see something, that’s why people are fishing for likes on pictures. Nobody even cares they just hit like, like, like, it doesn’t even register what you’re talking about.

It is a little addictive. I can admit when I post a picture I find myself checking it a couple hours later, “Does anybody like me?!?”

Alright, whether you get 20 likes or 2,000 likes on that picture is it really gonna make a difference in your life?

It makes absolutely no difference.

I know, it really doesn’t.

So I’m obligated to ask as a metalhead, what’s the status of That Metal Show is it gonna goto Netflix?

I saw you tweet something about that, people were commenting “Obviously a joke”.

Yeah, I was just busting (former That Metal Show co-host) Eddie Trunk’s balls. First of all when you’re on a TV show and you’re the host of the show, you really have no control over anything. Especially when the show gets cancelled, the network owns the show, you’re just like an actor and you have no rights to it whatsoever. They own the show and if they never want to do anything with it again, If Netflix comes to VH1 and says “we’ll give you $100,000,000 if you give us the rights to That Metal Show” they can say no and you’ll never see it again. It really has nothing to do with us. I can’t call up Netflix and say ‘hey I used to be on That Metal Show. you guys should be interested in it.’ It doesn’t work that way. Were people going up to James Gandolfini when the Sopranos got cancelled and going “You should get it on Showtime. What about Amazon Prime? I love that show!”

I thought I read somewhere that Eddie Trunk owned the show or maybe a piece of it.

No, the network owns the show. It’s just like Comedy Central owns the show Crank Yankers, the show I used to work on years ago. If I married some woman that’s the head of Netflix, Crank Yankers cannot be on there unless Comedy Central says “we’ll give you Crank Yankers.” It’s like that famous story where Howard Stern used to have a show on channel 9 back in the day in New York and he did these great shows on Saturday night and you never saw them anywhere, there’s some bootleg tapes out there because channel 9 would never give him the rights cause they own that stuff. So they never gave him the rights to put it out on DVD or anything so you really never saw them once they aired that one time. All the money he has and the power and he still couldn’t get them from channel 9. They’re like “No we don’t want to give them up to you,” so that’s just the way it is.

I wanted to ask you about a couple final tours that are happening this year. You got Slayer and Ozzy calling it a day. You opened for Slayer right? Doing stand-up?

That had to be a pleasant experience.

It was rough. Slayer, Megadeth, and Anthrax.

What year was that?

Ok. So That Metal Show was just starting right?

Yeah we were on the air for a couple years so I’d say 75% of the audience knew me, which was good. If they didn’t know me there’s no way I would have done it so at least they gave me a shot when they saw me walk on stage. But then they give you like a two minute grace period before they hate you so you better be interesting up there.

What kind of material would you do, would you just riff on the crowd or what?

No, you can’t cause you’re in a an arena so it’s really tough to riff on the crowd. It’s not like a comedy club cause nobody knows what you’re talking about. I’d just do quick one liners, drinking jokes, sex jokes, make fun of hip hop, and then do some metal jokes.

And how long would you do, how many minutes?

I had to do like three five minute sets, five minutes in between each band right before the band went on.

Did you get hit with any bottles of piss or anything?

So are you gonna goto any of these final Ozzy or Slayer shows?

Yeah I wanna goto these shows, the Slayer line-up is so great, but at this point in my life with my schedule I gotta pick and choose when I goto shows. Really if you think about it, with the stability of the music industry any band’s show could be their “final tour”. So if there’s a band I’ve never seen or I haven’t seen them in 10-15 years that’s more of a priority for me even though this is Ozzy and Slayer’s final run, like you said though who knows maybe they come back.

Sometimes it’s better. . . I don’t know it could go either way. Sometimes it’s good when you saw an amazing show by Slayer or whatever band years ago, 10 years ago, and you’re like I don’t know if they could ever top that and I don’t want to go back and it’s not as good. So you just want to leave on that memory. I know a lot of people that do that. And then others will just go every year that they come around and I’m more guilty of that It’s like ‘ahhh it’s another concert, I want to go.’ I like going to shows.

Oh yeah, I love going to shows. But like I went to see Motley Crue on their last run and it was a terrible show. I don’t know, they were like a year and a half into it and they just seemed beat and not on the same page.

But speaking of, I’m glad I got you on the line because Tommy Lee was in the headlines this week. His son punched him in the face and busted his lip. First of all I’m calling bullshit on Tommy Lee. His version of the events was my son burst into my bedroom and punched me in the face, who the fuck is your son Bam Margera? Unless he’s on PCP or has an MTV hidden camera show I don’t think it happened that way. They’re saying he (Tommy Lee) has an alcohol problem but I don’t know what do you think?

Well, I mean just that he puts a picture on social media and says “my son did this to me,” is kinda lame. It’s like, come on man just keep that stuff private, that family stuff. I mean you run to social media and Instagram that you got a fat lip from your son. If the cops come, you just say “yeah he punched me” or whatever, but no one would have known about this, and if the cops didn’t come nobody would have known, but then he decides to put a picture out there and he wants sympathy from everybody. If your 20 year old son gives you a fat lip, I don’t feel bad for you.

Yeah. And then he’s shitting on him in some other posts. So you’re saying you wouldn’t do that if Luke (Florentine’s 7 year old son) punched you in the face?

No. No I wouldn’t. You know when Pam Anderson is the normal one in that relationship and has got her shit together you know that he’s got some problems.

Everyone is Awful (Except You) is available now from Da Capo Press. 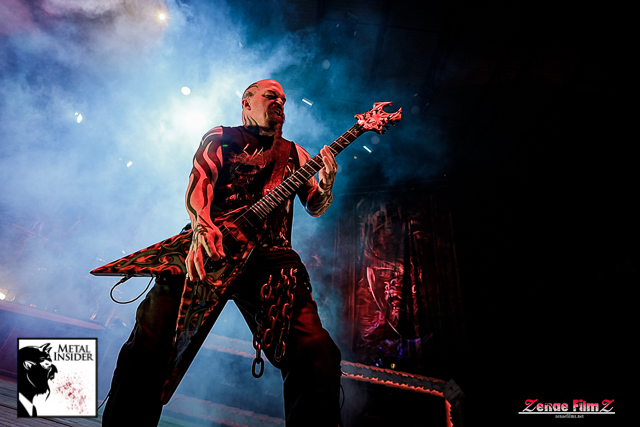