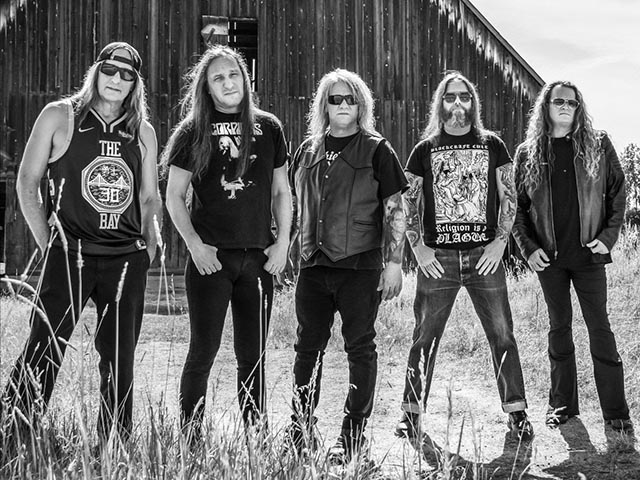 Thrash legends Exodus are set for their new album, Persona Non Grata, to arrive on November 19th via Nuclear Blast Records (pre-order here). We caught up with frontman Steve “Zetro” Souza to discuss the group’s first album in seven years.

It’s been about seven years since Blood In, Blood Out, and between the overall pandemic and the anniversary celebration for Bonded by Blood, how has the overall experience been like getting the new album together?

We really didn’t work on it much through the seven years. Basically as we came home from… As the pandemic started, we were in Europe with Testament and Death Angel. We came home, and then Gary started getting together with Tom because that’s usually how it starts; that’s how the basic song structures go together. And then they were getting together probably May, June, July, a little bit into August, and then all of us… Because we recorded it up in the mountains in Lake Elsinore, California, and we were all up there together doing it, so we started that. About last year at this time, actually, we were up there during it. About the first week in September it started. We had three songs in 2017, and then we didn’t have any time because Slayer had announced their last final tour and Gary was busy doing that. It wasn’t like that at all. We didn’t really get together until it was time to do it.

Persona Non Grata seems very relevant for the times. Your single for “Clickbait,”alone speaks volumes with everything.Can you talk more about this song?

I think a lot of the lyrical content on the record is very socially aware, but this one especially rings a lot of bells. “Clickbait” is just what we’re challenged by, all of us, constantly in social media and in the news and everywhere. Man, when that dropped, I saw the comment reaction on that. It just really resonated with people very much. But we’re always very tongue in cheek when it comes to political, religious, or social issues. We always attack that sort of thing. It’s always been that way.

Oh, sure. Not just political. You could see that on Blabbermouth every day. You know what I mean? It’s everywhere. We know. There’s a reason for it. Some of those guys should read some of that stuff.

The video for the song, “The Beatings Will Continue” is pretty much brutal and torturous throughout. What was the experience like making this video?

Well, I didn’t have to because I wasn’t in it. It was the first time ever I didn’t have to go to the video shoot. I saw it like everybody else did. I was like, “Oh, wow.” And then at the end when they’re pulling those fucking nails out of his hand, it’s like, “Ow.” It’s just so brutal. Yeah, again, another more tongue in cheek song where it just amplifies the sentiment of the times kind of, and it’s very socially aware and very socially curt. So I would say that it seems like the two songs that they released are very… Not saying everything on the rest of the record isn’t, but they were just really, I would say, profoundly forward in the subject matter, I must say, the first two that they decided to release.

They do leave very strong messages. There’s also the song Elitist, can you elaborate on this track?

Yeah, Elitist, Elitist. If all metal fans… Because I actually wrote the lyrics to Elitist, and it’s coming from a point of… It’s about the person who’s singing it. It’s like, “I’m an elitist,” and then talking about the ways that elitists operate. Persona Non Grata is the same way. Antiseed, Fires of Division, all of these very socially aware songs that just completely deal with what is really going on right now. R.E.M.F., every song on the record seems to resonate with what’s happening. It wasn’t done purposely like that. I just think that we as a band have always been that way, again, socially, politically, religiously. Anything that’s going on in the world, we’re kind of aware of it and we’re quick to poke fun at it or we’re quick to challenge it.

Did you face any challenges getting the album finished?

No, none, because if anything, the pandemic worked in our favor because normally we would have been like, “Oh, shit, we got to get the tracks done because in three weeks we got to leave on this tour. And then when we come back, if we’re not done by then, they have to get it in because it’s going to take the label six months to produce it and get this.” So there was always that time restraint on it. This was like, “Well, don’t know when it’s coming out, don’t know when this shit’s going to end, so just take your time.” So basically, that’s what… Think about it. We recorded it last year at this time. This album should have been out in March, you know what I mean? A normal record when you record like that, you’re thinking, “Okay, we’re going to record now. The record will be out in five, six months.” This one is just because we didn’t want to not be able to tour. We kind of want this stuff all to go away, which it has. Well, it’s going away, anyway. At least we’re able to play.

At least some sense of normality is coming back.

Some sort. I’m sure it’s going to take another year, I think, fully before it clicks in everybody. But we’re twenty months into this thing now, man. Pretty wild.

I think when it first started, most of you tested positive for COVID or something while you were on tour. It was complete madness all at once.

Yeah. Didn’t know what they were going up against. We never thought in our lifetime anyway. Kind of strange, but it looks like they got a cap on it. We’ll see. Yeah. People got sick, but you know what? We all recovered, everybody came back, and it’s just live and learn. It’s part of life, and it’s part of life that we were exposed to. All we can do is move forward. But the best part of it is we had time enough to record a record and put a record out.

Can you give us a health update on Tom Hunting?

Tom’s great. I talked to him. He’s actually 100% cancer-free now. They’ve gotten every piece of it. He had four chemo treatments to do, but he doesn’t have to do them now because they’ve gotten everything out of him. So now it’s basically healing and getting strong back to where he can be back to playing again, back to where he was. And he will. He’ll be back. I know he’s one of the strongest guys, if not the strongest guy I fucking know. Tom will be back in full force.

That is awesome to hear. I was concerned about it. Talking about Clickbait, there was some confusion across the internet.

Of course there is. No, he’s doing great. For everybody who reached out and donated to the GoFundMe, it’s just really cool and was so cool about that. He’s overwhelmed. He was just overwhelmed with it all. So it was all so cool from the fans and everybody else, like yourself, that are all concerned. The metal community really came together on this, and we love them for it.

I’m very happy to hear that he’s better and he’s just focusing on just getting stronger from here on out. Hopefully, fans will appreciate the album when it comes out. Is there anything that you want to say or add about the album or anything that fans should know?

Awesome. That is definitely the vibe that I’m getting from this album. It’s like a brutal return. 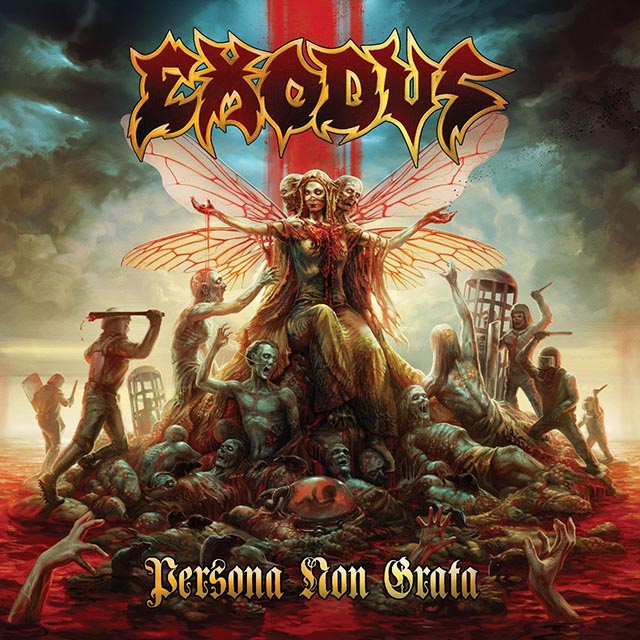