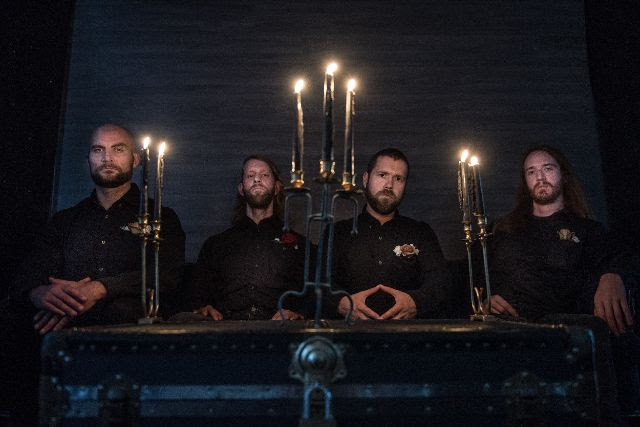 Metal Inside(r) Home Quarantine is Metal Insider’s new column during this time of isolation due to the COVID-19 pandemic. We asked artists five questions on what’s been keeping them busy ranging from their favorite movies, food they’ve been eating, music they’ve been listening to and more. We caught up with Dave Davidson (Revocation/Gargoyl) as he’s been spending this time gearing up for the release of Gargoyl’s debut full-length album, which is scheduled to arrive on October 9th via Season of Mist (pre-order here).

I’ve been working on my website www.DaveDavidsonGuitar.com that recently launched and teaching a whole lot. Other than that, I’ve been busy practicing and writing new music in addition to doing press for the new Gargoyl album that’s coming out this fall.

I’ve been really going down the death metal rabbit hole recently. Been jamming on the newest releases from Lantern, Cosmic Putrefaction and Umbra Vitae a lot. Also check out Nir Felder’s latest record if you’re looking for some killer jazz fusion guitar playing with a rock edge.

I’ve been cooking a ton in quarantine actually. Made a lobster boil dinner with steamers, grilled swordfish, corn on the cob and asparagus that was a real crowd pleaser the other night, had to throw some steak tips on the grill to add some turf to the surf. I’ve also been sautéing/pan searing a lot thanks to the guys at SB Forge. Picked up a couple carbon steel pans from them and they’ve been getting a lot of use in the kitchen.

I’m currently reading “Coltrane on Coltrane: The John Coltrane Interviews” and “America The Farewell Tour” by Chris Hedges, both books are riveting in their own ways. Coltrane was such a profound musician and thinker, it’s such a pleasure reading about his musical philosophy and the Hedges book is also gripping even though it’s intense and sometimes disturbing. Hedges has been an outspoken critic of the American empire for quite sometime now and this book definitely doesn’t pull any punches. He discusses how American institutions have been hollowed out from the inside and how the systems that are in place now are set up to preserve the dominance of the ruling elites and corporate oligarchs that pull the strings behind the scenes. When I’m looking to just chill and have a laugh I’ll watch an episode of Documentary Now or Rick and Morty. Also just got into Narcos so that’s been my binge watch show of the moment.

Try to stay focused and positive, work on projects that you’ve been meaning to complete or pick up a new hobby. I bought a bike and have been riding around which has been good for my mental and physical health, keeps me active and helps to clear my mind. I feel very lucky that I have music as an outlet, it’s a crucial cathartic release for me especially in these uncertain times. If you don’t play an instrument and want to learn, now is the time!