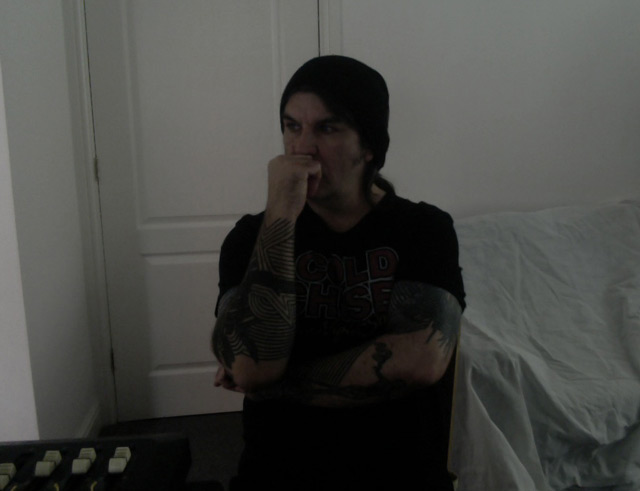 Metal Inside(r) Home Quarantine is Metal Insider’s new column during this time of isolation due to the COVID-19 pandemic. We asked artists five questions on what’s been keeping them busy ranging from their favorite movies, food they’ve been eating, music they’ve been listening to and more. We caught up with Damian B (Khost/Trial) as he’s been spending this time working on new music.

Have been writing for TRIAL, the first ep ‘1’ is out, we still have some of the physical CD left. I contributed to an hour-long mix for KHOST, and writing new material. The same for my carthage project which has been going since late 90s. I love my old 4 track. It started on that and just organically progressed. I am doing a mix for that too and news on carthage later this year. Compiling Deathless material for a release. I did this band with David Quinn from the late 80s. Working on a Khost compilation for Still Heat. I learn a few languages every day and skate when I can: I know a secluded ramp. Looking after the nearest and dearest. I love the pre-dawn hours.

Will Haven: Open The Mind To Discomfort

Texas Is The Reason: Do You Know Who You Are

Calibre: The ‘Monday Is Okay’ Mix

His name Is Alive: Home Is In Your Head

Joe Walsh: So What

Unwound: Leaves Turn Inside You

I really have a food aversion: I hate waste and hate thinking about food and the resources that drain the planet feeding entitled humans who place ideals over reality.The ideal of the food on a plate – and it could be some jpeg on a site/phone – causes them to get fat, and could be definitely argued, causes pandemics. I don’t understand restaurants either: who can eat socially except some freak that likes to watch people chew/ingest food. Go to a zoo or some niche club where you book discreetly online. Read ‘Down and Out In Paris and London’.

Learn from the silence of lockdown and how the other species on the planet were given a reprieve from the exhaust fumes and needless emissions from the glassy-eyed 9-5-ers who – as Jello knew, want convenience over everything. The greedy straight people, the consumer hordes, fleas and ticks. Fuck them: they will kill this planet if they are allowed to.Form a band to explicitly say ‘fuck. you.’