So it’s Valentine’s Day, and if you’re reading this column chances are you either don’t care, forgot and now have to run out and buy flowers for your significant other, or you’re snuggling your cat while muttering “You’re my Valentine” in an overly cutesy voice (no judgement). And if you do happen to be a rare breed of metalhead that revels in Valentine’s Day, hey, don’t let anyone tell you metal and love don’t mix. I mean, the holiday mascot is a dude shooting arrows at people. That’s kind of brutal right? The arrows may be heart-shaped, but if Cupid hits you in the eye it’s still an arrow sticking out of your goddamn eye. If nothing else, if you’re a fan of Saxon you’ll be happy to know they’re our top debut this week with their highest charting debut in the United States ever.

This is Saxon’s highest charting album ever in the US.

W.A.S.P.’s sixteenth album has a respectable debut, though not as high as its 2015 predecessor.

The latest from this Albany hardcore/metal act.

This sold the same amount as last week.

This got boosted back up onto the charts.

This re-enters the charts.

This dropped off last week, but now it’s back up.

If it seems like you’re seeing a lot of new King Gizzard & The Lizard Wizard one here, it’s not just you. The band put out five albums last year, and this is one of them.

Tribulation, Down Below (Century Media)
450 sold 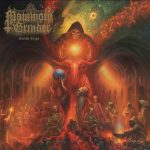 Phil Campbell And The Bastard Sons, The Age Of Absurdity (Nuclear Blast)
250 sold

This EP came out in December last year.