There’s a reason why 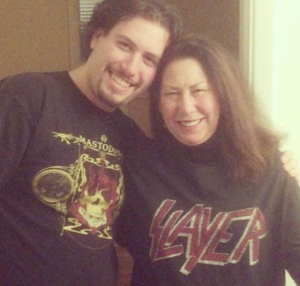 most of the Metal Insider crew was taken aback when Slayer revealed their next tour would be their last. Whatever your thoughts are about their catalogue or wherever you’d rank them amongst the Big 4, Slayer is truly a larger than life band. Simply play the first few seconds of any given Slayer song, and you’ll hear a room full of fans chant their name, even at concerts where Slayer isn’t on the bill. Hell, even my MOM likes Slayer … Well, sort of.

As you can see in the picture above, that’s my mom proudly wearing a Slayer t-shirt. Now at the expense of destroying her street cred, Mom isn’t actually a diehard Slayer fan, or of most metal for that matter. In fact, I’m only 90% sure she knows who Tom Araya is. However, being a flower child of the ’60s, she loves live music and to this day jumps at the chance to go to concerts with me, even if the band isn’t her cup of tea.

My mom had already been to a few concerts with me by the time we saw System of a Down together in 2005. However this was the first time she wore the now infamous Slayer shirt, and for the first time discovered the band’s true power. As we walked around the Spectrum arena in Philadelphia looking for food, drunk guy after drunk guy would yell “SSLLAAYYEERR” upon seeing my mom donning a Slayer shirt. Most mothers would start to act concerned, but my mother absolutely loved it. “Yeah, SSLLAAYYEERR,” my mom would yell back while extending a peace sign … I didn’t have the heart to tell her that devil horns were a more appropriate gesture.

From there on, she was hooked. No matter what band we were going to see in concert, my mom wanted to wear that Slayer shirt and join a group of drunk metalheads in a Slayer chant. “Is this the type of concert I could wear the Slayer shirt to?,” mom would ask, knowing damn well she was going to wear it regardless of my answer. And sure enough, concert after concert she’d receive a handful of “SSLLAAYYEERR” chants in her direction, much to her delight.

But God help you if she couldn’t find that Slayer shirt before heading off to a concert. I’ll never forget having to drag my mom out of the house and to Ozzfest 2010 after she seemed to misplace the Slayer shirt. “Mom, we have to go. Just wear this Guns N’ Roses shirt,” I begged her. Upon hearing me say this, she turned with a horrified look. “But it’s not the ssaammeee,” she moaned. Despite her stubbornness, I eventually convinced her to wear the damn GN’R shirt, and we were off to Ozzfest … but that didn’t make her any less fussy.

While waiting in line for drinks in between bands, a young couple complimented my mom on the shirt. Rather than cheering up, she instead slowly turns to the couple and shrugs, as if she was a disgruntled child forced to wear a tie to dinner. “Mom, the nice couple gave you a compliment. What do you say?,” I told her, as if I was a parental figure telling his child to show some manners … something I never thought I’d have to do with my mom, especially at Ozzfest of all places. That’s when she pouts and says, “Thanks … I have a cooler Slayer shirt at home, though.”

Thankfully for all of us in the Shaw household, my mom found the Slayer shirt, which she still wears to concerts whenever she can. I’ve even let her wear the shirt to a few Slayer concerts, because if anyone deserves a pass on the “You Don’t Wear The Band’s Shirt At Their Concert” rule, it’s my mom. So sure, Slayer’s reign is soon coming to an end. But take solace in knowing that Mrs. Shaw will still be at shows encouraging others to chant “SSLLAAYYEERR” for many years to come.