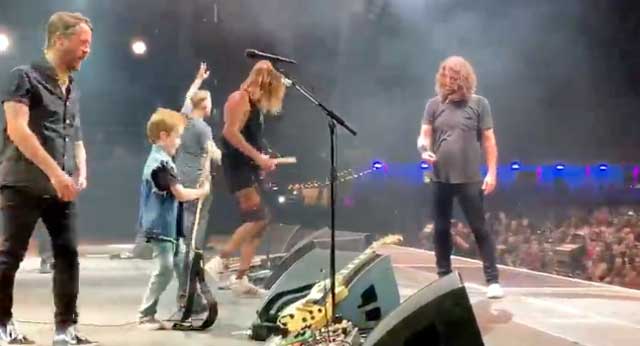 While Foo Fighters surprised their fans on Friday (20th) with the release of Live In Roswell in celebration of the Storm Area 51 Raid, the group had another treat during their performance at the Bourbon & Beyond festival in Louisville, KY. On Friday (20th) night’s show, the Foos invited Anthrax guitarist Scott Ian’s 8-year-old son, Revel Young Ian, to help with the closing performance of “Everlong.”

Ian shared the moment on Instagram along with the following message:

“There goes my hero!

Proudest dad moment ever? How about when your son gets to join his favorite band on stage to play Everlong in front of 40,000 people and NAILS IT! Thank you Dave, Taylor, Pat, Nate, Chris, Rami, Gus, Kerwin, Sean, Patrick, Simone and everyone else on the Foo crew for being the best!!!”