Suicidal Tendencies upcoming album STill Cyco Punk After All These Years is scheduled to arrive next Friday (7th). Not only that, the record is a re-recording and re-imagining of Cyco Miko’s (Mike Muir) 1995 solo effort entitled Lost my Brain! (Once Again). To celebrate the LP’s arrival, the group has taken extra steps by collaborating with Converse for a brand new Converse x Suicidal Tendencies collection, which will be available on the same day as the album’s arrival at Converse.com and select retailers.

The collection includes the following apparel:

The company will celebrate this collaboration at Converse’s hometown of Boston the day prior (6th) at Bodega Boston, in a pop-up from 11:00AM to 8:00PM as well as the following day starting at 11:00AM, which will be right before the group kicks off their tour at the House of Blues.

Frontman Mike Muir reflected on his relationship with Converse:

“When I was young, I still remember getting my first pair of ‘Chucks’ for my birthday and how stoked I was to wear them to school the next day. It was almost like a rite of passage, the beautiful thing about them is whatever ‘direction’ you were headed, you could go there with your Chucks.”

“All these years later, Converse has the same meaning to me. Just as young Mike will never forget putting on his first pair of Chucks, I can’t wait to relive that amazing feeling with the new Converse x Suicidal Tendencies, a massively proud moment for the band, our fans and of course me personally!” 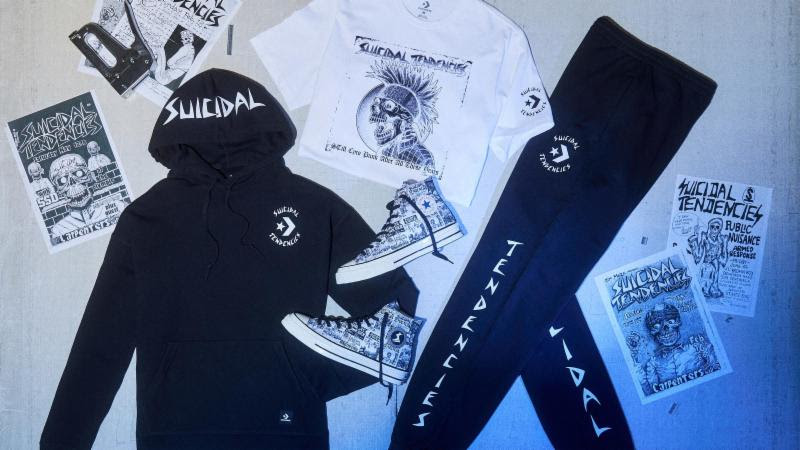 If you haven’t yet, check out the new track “It’s Always Something,” which premiered via Full Metal Jackie. The timelapse video shows footage of Alan Pirie a.k.a. Samurai Guinea Pig airbrushing wall art at Nuthouse STudio: