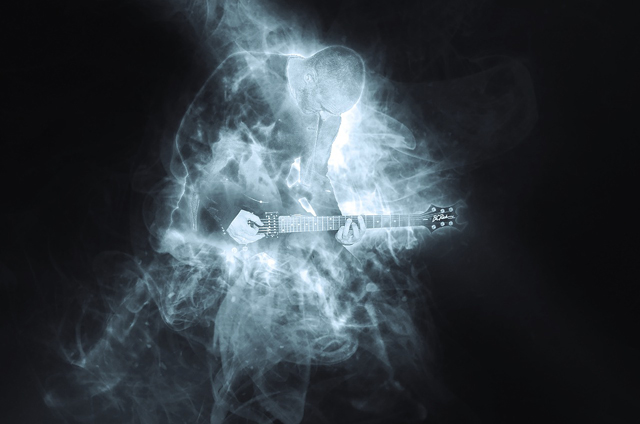 ‘Amerikill (The Trigger)’ is the new single to be released from Venomous, the band’s latest album that dropped on Art Is War Records late last October.

Venomous and ‘Amerikill’ – ten years in the making

Venomous, as it turns out, was a long time coming, a very long time indeed. The veteran metallers unleashed it on the world just in time for Halloween 2019, following a decade long absence from releasing any new albums.

Produced, mixed, and engineered by Ulrich Wild, who deemed the album “heavy and intense…as brutal as it gets”, Venomous also marks the band’s first time in the studio with new(ish) drummer, Fabian Vestod. Vestod became a member back in 2018, after long standing rhythmist Paul Hopkins made the decision to move on. A longtime friend of the band, according to vocalist and bassist Steev Esquivel he “came in strong…and immediately became the obvious choice” to fill the vacant drum stool.

Having formed almost four decades ago in 1994, Skinlab have surprisingly only released a total of five full length albums in all those years, from 1997’s debut Bound, Gagged and Blindfolded, to 2019’s Venomous. Despite not being as prolific on the album front as many of their contemporaries, the band are nevertheless immensely popular with fans across the world and were intending to tour Venomous across North America this year.

The band itself has also been in different incarnations throughout the decades, with Esquivel being the mainstay. According to Esquivel, however, Skinlab never formally broke up. They’d been writing Venomous “for the last 11 years it seems like”, spurred on by the prospect of members like Scott Sargeant and Mike Roberts returning to the fold. Although those opportunities didn’t quite work out, nevertheless the music was being written and recorded, and after the return of guitarist Steve ‘Snake’ Green to the band in 2018 the momentum really started to pick up.

On the decision to release ‘Amerikill’ as the debut video from the album, the band revealed that the song was an obvious choice for the lead as it explores inner paranoias “developed through isolation”, delivering a timely message that is “real…know your surroundings”. It was shot by the band itself with a storyline developed by Karl Whinnery.

Music for the MMA masses

‘Amerikill’ is certainly going to become a favourite with longtime Skinlab fans, as well as introducing the veteran noisemongerers to the brand new audience that’s developed in the years since their absence from the scene. And it’s highly likely that the song will become the walkout song of choice with many a UFC or MMA fighter over the next 12 months.

Alternative music has long played an important role in the sport of MMA. Some of the greatest UFC walkout songs of all time are metal, rock and punk classics, and the “UFC’s own Rocky” Frankie Edgar even sports a Sick of It All tattoo. The connection works the other way too; musicians like Tool’s Maynard James Keenan and Five Finger Death Punch’s Zoltan Bathory are longtime martial artists. Maynard was even awarded a Brown Belt in Brazilian Jiu-Jitsu from his Gracie Jiu-Jitsu coach.

However, Skinlab’s relationship with MMA runs deeper than most, stretching all the way back to the very beginnings of the sport. Skinlab’s early music was used by Jeff Weller and Josh Rosenthal to provide a soundtrack for the MMA bouts in the Bay Area, and when the band started attending fights they realised just how much people were enjoying their music.

Not long after, the band met videographer Bobby Razak, who would then go on to feature Skinlab’s sounds in his pioneering MMA documentaries, such as Rites of Passage. Then, as more fighters began to use their favourite Skinlab tracks as walkout songs, the band were able to secure former UFC fighter Nate Quarry in a featured role in their last video for the track “In for the Kill”.