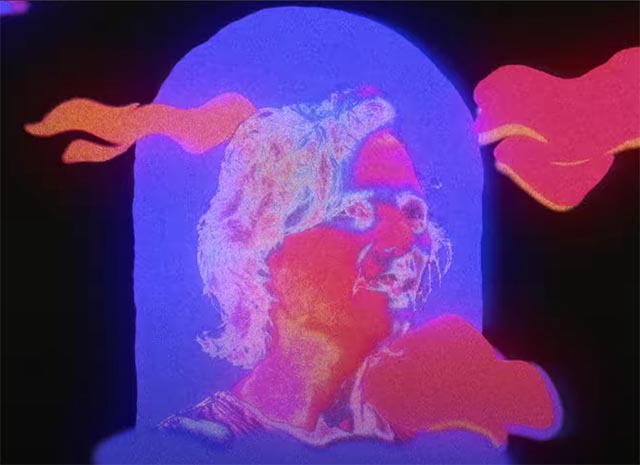 “O.N.E.” has a mellow grooviness that melds Polyphonic Spree’s joyous, carefree attitude, The Flaming Lips’ psychedelic style and East Asian influences with a little bit of metal guitar noodling and jazzy synths mixed in for good measure, creating a sound that’s as eclectic as the band’s last few albums. The video mirrors the movement and eclectic, “out-there” vibe of the song, mixing found footage/images and footage of the band’s members with an overlay of grainy, colorful animation.

“The song itself feels as if it’s constantly moving along so I tried to keep the visuals continually moving forward and sliding into different visual styles and landscapes. I felt the mix of stop motion and collage through the use of found imagery and the band would help compliment the tracks lyrics and themes as I interpreted them, of dreams, nightmares, climate change, dystopias, and utopias, as well as referencing events that took place during the making of the video over 2020. All video of the band was shot by Ambrose during the second lockdown restrictions and I had to give notes on shooting and direct remotely which was strange but so was everything during that period.”

This is the second song the band has released in the last couple of months. Back in December, the group put out a video for the track “If Not Now, Then When?.”

The video follows the apparent leaking of information regarding a new album. On January 18, a pre-order page by an Australian distributor for an album titled ‘L.W.’ with a track listing that features both new songs was posted then almost immediately taken down. According to the leak, the album would have been set to hit shelves February 26. The band is currently denying the release rumors, with vocalist/multi-instrumentalist Stu Mackenzie saying, “King Gizzard’s new album (y’all know what it’s called) is definitely not coming out in February.”

While an album coming out on February 26 is still up in the air, a concert has been confirmed for that day. The show will take place at the Sidney Myer Music Bowl in Melbourne, Australia with Tropical Fuck Storm opening. Tickets go on sale February 1.