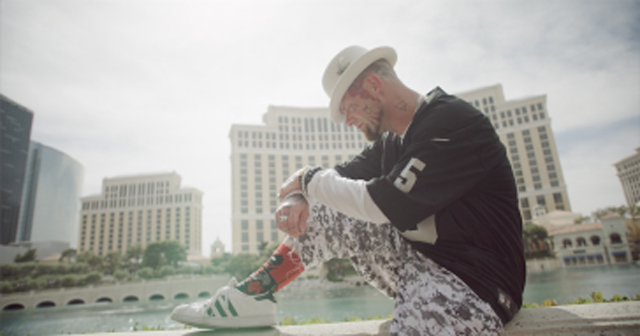 Five Finger Death Punch has released a video for their latest single, acoustic track “A Little Bit Off.”

Filmed during lockdown in Las Vegas, NV, the video features the band laying out the concept art for the original video interspersed into scenes of frontman Ivan Moody roaming around the city’s deserted streets and guitarist Zolan Bathory playing a game of chess in the sky.

Said the band in a statement about the thought process behind the video,

“Our new record, ‘F8’, came out right at the exact moment COVID-19 smashed into western society and (naturally) all attention was diverted to the pandemic,” said Moody of the thought process behind the video. “It placed us in a difficult situation, where on one hand this is probably the best album we have ever made. On the other, it felt insensitive to promote a record on full-tilt boogie while people were dying all across the world, businesses closed down, and the economy went face down in a ditch. Since it affects all public events, and tours are cancelled for who knows how long, artists also became victims of the fallout.”

“So we decided to make this video a snapshot of the unprecedented times and underline it with some humor to at least lighten the overall gloomy vibes. However, here we are today ready to release it… but thinking once again … is it insensitive to debut the video now that the world is on fire? I guess this will turn out to be the anthem for 2020… We are all ‘a little bit off today.’”

“A Little Bit Off” is the fifth single from the band’s eighth studio album, F8, released in February 2020 through Better Noise Music (their first for the label). It is the follow-up to 2018’s And Justice for None and is said to focus mostly on Moody’s struggles with addiction. It is also the first album to feature new drummer Charlie Engen.

The video for “A Little Bit Off” can be found below:

Five Finger Death Punch were slated to hit the road in April for a US tour with Papa Roach, I Prevail and Ice Nine Kills, but those dates were postponed due to COVID-19. The tour has been rescheduled and will run from September 28 in Sunrise, FL until November 9 in Cincinnati, OH. All tour dates can be found here.