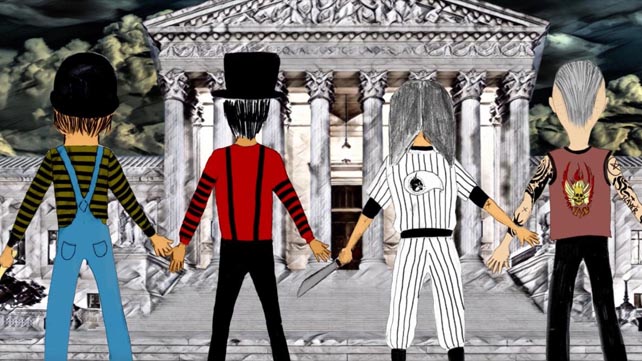 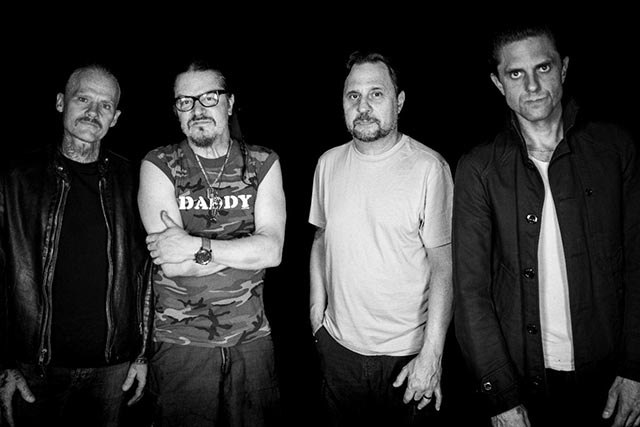 Yes! We get to see the new Dead Cross album this fall! Today (19th), the group consisting of Mike Patton, Dave Lombardo, Justin Pearson and Michael Crain have announced their new album, II, is scheduled to arrive on October 28th via Ipecac Recordings. To celebrate the album reveal, the group has shared a video for the song “Reign Of Error.” While being mixed with hardcore and politically-charged arrangements, the record also circles around friendship with the group joining together after Crain received his surprise cancer diagnosis.

“Words can’t even begin to describe how much this album means to me. It’s birthed of pain and uncertainty. The slow, excruciatingly painful, and nauseating recovery from cancer treatments were the catalyst for every riff and note on this album. However, my will to live and be with my brothers Justin, Dave, Mike, and co-producer Ross Robinson, got me out of bed and running into the studio every day to get it all on tape.”

“’Reign of Error’ was recorded almost as quickly as it was written and I believe there’s a very good explanation for it. I haven’t told anybody this before, least of all the rest of the band or Ross, but I honestly felt a strong presence in the studio that day. Those riffs flew out of me and when Dave sat down at his kit it was almost as if we’d played that song a thousand times before. It literally just happened so fast. Bam! One take. I’m not trying to paint a dark or fantasy-like story either. Having just escaped death and still healing from my cancer treatments I was incredibly sensitive to energy and the other side. There was someone else there. Not evil but benevolent and inspiring. I honestly believe it was Dave’s old bandmate and friend Jeff. I think he just wanted to jam with his friend again and perhaps did so through me. There I said it. Whether people believe it or not I really don’t care. I’m just grateful that I had that experience.”

Patton recently spoke to Rolling Stone discussing the new record and opening up about mental health issues resulting in the cancellation of Faith No More and Mr.Bungle’s 2022 touring plans, stating:

“It’s still going on — but it’s better.It’s easy to blame it on the pandemic. But I’ll be honest, man: At the beginning of the pandemic, I was like, ‘This is fucking great. I can stay home and record.’ I’ve got a home studio. So I was like, ‘Yeah, what’s the big deal?’ And then something clicked, and I became completely isolated and almost antisocial afraid of people. That sort of anxiety, or whatever you want to call it, led to other issues, which I choose not to discuss. But I got some professionals helping me, and now I’m feeling better and getting closer to diving back in. Towards the end of the year, I’ll be doing my first shows in, like, two years, which is the longest time since I started doing this, that I’ve been out of the game.”

Asked to elaborate on “other issues,” Patton explained:

“It was a little bit of everything. But mostly, in my experience, it was mostly mental. I saw some therapists and all that stuff, which is the first time I ever had to do that in my life. And they basically diagnosed me as having agoraphobia; like, I was afraid of people. I got freaked out by being around people. And maybe that was because I spent two years basically indoors during Covid. I don’t know. Maybe it reinforced feelings that I already had. But just knowing about it, talking about it, really helped. Right around the time that Faith No More was about to go back on the road. That’s when I kind of lost it, and it was ugly and not cool. A few days before we were supposed to go on the road. I told the guys, ‘Hey, man, I don’t think I can do it.’ Somehow my confidence was broken down. I didn’t want to be in front of people, which is weird because I spent half of my life doing that. It was very hard to explain. And there were some broken feelings on both sides about it, but it’s what I had to do. Because otherwise something really bad could have happened… It was right before our first rehearsal, and I just freaked out. I just said, ‘I can’t do it.’ They had been rehearsing so if I were them I’d be really pissed off at me. And they were. And they probably still are. But it’s just about being true to yourself and knowing what your limits are. And I knew that if I kept pushing, it could have been some sort of disastrous result. It was just like, ‘Goddamn it. Maybe I don’t need to do this. Even though I agreed to do it, and it’s gonna bum a lot of people out. I gotta take care of myself.’ So I’m getting better at that.”

Patton revealed there’s no update on a Faith No More tour:

“I don’t know. We may reschedule stuff; we may not. I’ll just leave it at that. It’s a little confusing and complicated. So if we do, we do. If we don’t, that’s cool, too.”