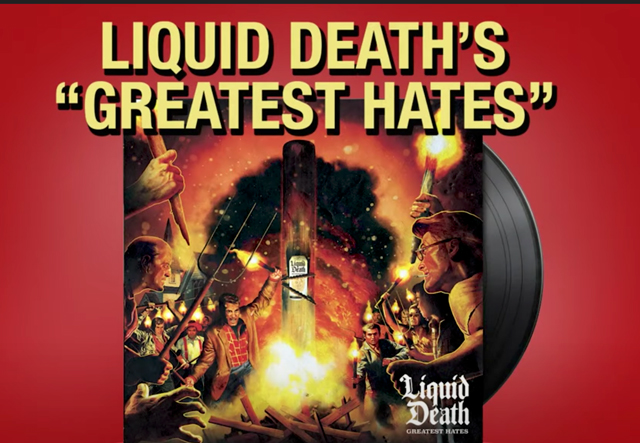 Canned water brand Liquid Death has come up with a creative way to deal with some of the hate comments they have received: make a metal album out of them.

Released on May 1, Greatest Hates is a 10-song, 22-minute album made up of hate comments taken verbatim from online critiques of Liquid Death and their product (all comments are attributed to the people who wrote them). The company recruited Gruesome drummer Gus Rios, Eternal/Upon Infliction guitarist Seth Ringler, Arsis vocalist/guitarist James Malone and vocalist Torin Ridgeway to record and write the music, and producer Matt LaPlant (Justin Bieber, Jennifer Lopez, Nonpoint, Skindred, Malevolent Creation, etc.) to mix it.

“As a polarizing brand, it means we have people who love us so much they’ll never buy another water and even tattoo our brand on their bodies,” Liquid Death founder Mike Cessario told New Noise Magazine during a recent interview.

“But it also means we have plenty of haters who don’t get the brand and think it’s the antichrist. It’s impossible to have everyone truly love your brand. True love means there’s going to be true hate.”

“We started celebrating our haters early on and running Liquid Death ads featuring their social media hate comments. They were the highest-performing ads we have ever done. So, we worked with our agency, Partyland to come up with new fun, ways to celebrate our haters and our “Proudly Not For Everyone” rallying cry. Because haters are generally angry, it made perfect sense to turn their comments into an angry metal album.”

An 80s-inspired “greatest hits” trailer for the album can be seen below.

Started in 2019 by Cessario, a former creative director at Netflix, Liquid Death aims to get water-drinkers away from environmentally-unfriendly plastic water bottles while having a little fun and celebrating art. “When I set out to start Liquid Death, I wanted to use entertainment to make being healthy more fun and sustainable,” said Cessario in the interview. “Since then, it’s been amazing to see the brand take on a life of its own and connect with people in a way that other wellness brands really never have before.” The brand currently counts actor Joe Manganiello as a fan and NOFX’s Fat Mike as an investor.

‘Greatest Hates” is available on all streaming services now. A vinyl edition of the album is up for pre-order on the Liquid Death website.