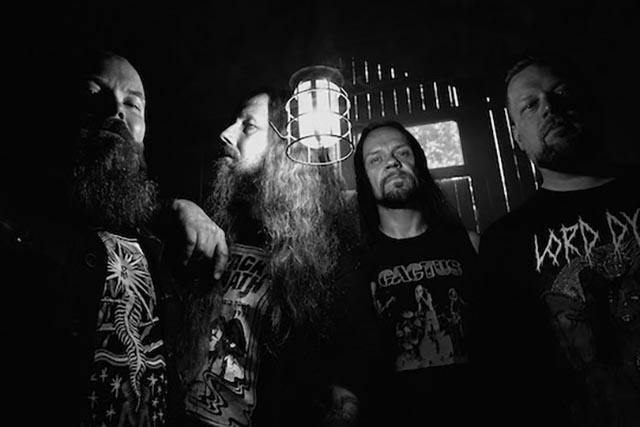 Finnish sludge/death metal outfit Black Royal have unveiled a video for their latest single “Earthbound.” The song is the title track of their upcoming third full-length effort, set to arrive later this year via M-Theory Audio.

“It started out as more of a tribute to Crowbar – one of BLACK ROYAL ́s big favorites – but took a turn in a bit more epic direction. The lyrical story line was inspired by the ancient Scandinavian/Sami myths of the netherworld. For example, ‘northern fire beliefs’ have been associated with perceptions of the afterlife. The aurora borealis were considered as the lives of those who died by the sword, those who fell in the war, or those who were violently killed. Their constant fighting and the blood flowing from their wounds were reflected in the northern sky like northern lights.

Also, in early arctic primeval communes, a social life of a man was left shorter than his physical one. If at old age one became useless in the eyes of his community, his presence wasn’t socially noticed. If an old man couldn’t provide food for himself and take part in hunting or cultivation, his children were asked to escort him on to his final path. He was a useless man to that community and that decision was a social death. The elder man was allowed to decide for himself the time of his own death and that decision was honored thoroughly.”