Alford commented via the description of her video:

“Jay Weinberg is one of my favorite drummers and I’m excited to cover one of his songs. The moment I heard Slipknot “Unsainted” I knew this was the one! Very proud to be in the SJC Drums artist family with Jay!”

Not Ur Girlfrienz has been getting a lot of attention lately. The band released their debut EP, New Kids In America, earlier this year. They have had the opportunity to play the Vans Warped Tour and Download Festival, as well as open for the likes of The Polyphonic Spree, Bowling For Soup and The Dollyrots. Just like Weinberg, Alford is sponsored by SJC Custom Drums.

“Unsainted” is the first single from Slipknot’s latest album, We Are Not Your Kind, released August 9. The album debuted at number one on the Billboard 200 with more than 100,000 units sold in its first week, reflected in the chart dated August 24.

Slipknot is currently on their Knotfest Roadshow tour, which runs through September 8. Support on the tour comes from Volbeat, Gojira and Behemoth. Remaining dates can be found here. 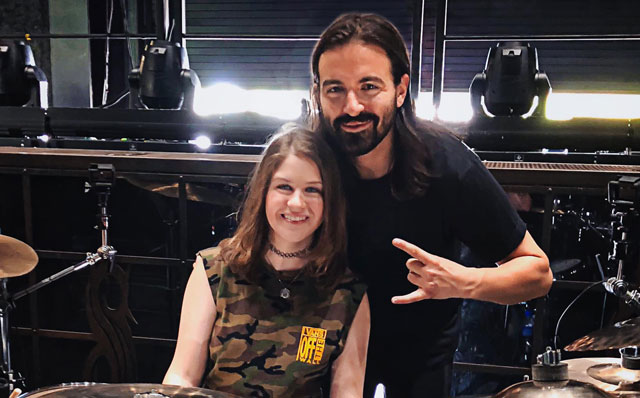