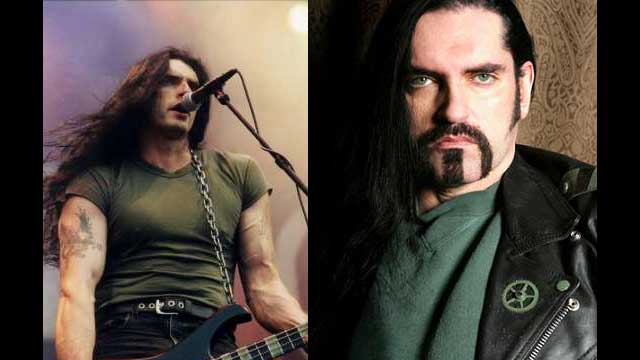 The first time I saw Type O Negative, they weren’t even Type O Negative yet. Visiting NYC for, I believe, the second time without my parents for the CMJ Music Marathon in 1990, I wasn’t (technically) old enough to drink, but that didn’t stop me from doing so while taking in as much live music as I possibly could. After seeing Primus live for the first time and having my mind blown, I was then led by someone or other to a showcase going on at a long-defunct club called Zone DK. Equally long-defunct jokey crossover thrash band Mucky Pup was what drew me there, but the opening act, then called Repulsion, was my takeaway for the night.

Having had little more than a passing familiarity with Carnivore, I’d heard that this was someone or other from the band’s new project. That in no way, prepared me for what I was about to see. Peter Steele, a 6 ‘ 8″ monster of a man, stood menacingly with a bright green bass with a chain as a strap, and when they played their set, consisting of most of Slow Deep and Hard, it sounded, unlike anything I’d heard. Hardcore? That first album was as close as they got to it. Doom? Yeah, well, there were definitely slow parts. Goth? Yeah, this was heavy, but has keyboards. Yet somehow funny? By the time the “I know you’re fucking someone else” chorus of “Unsuccessfully Coping With the Natural Beauty of Infidelity” came around, I’d already purchased Repulsion’s cassette tape, then called None More Negative. Almost everyone was on board – I say almost because some Carnivore fans didn’t want anything new, and one guy kept yelling for a Carnivore song, heckling the new band. Steele challenged the guy to come up and say it to his face, throwing down his bass. Wisely, the guy didn’t take him up on his offer. Aside from the intimidation factor, Steele’s voice, alternating between baritone and more in the typical hardcore vein, showed that he had talent as well as a sense of humor.

By the time Roadrunner signed Type O, and None More Negative was reissued as Slow Deep and Hard with the track listing slightly altered, the album had a grip on me. A semi-autobiographical concept album about love, loss, a suicide attempt, and the protagonist’s revenge. Listening back to it now, it’s certainly misogynistic, but it’s a perfect album in its darkness and cathartic nature, with moments of beauty showing through as well. At any rate, that was merely the blueprint for what followed, as Bloody Kisses elevated them to the top, or at least the upper-middle, of ’90s metal royalty.

Featuring “Christian Woman,” “Black No. 1,” and their cover of Seals and Crofts’ 70s easy listening jam “Summer Breeze,” Bloody Kisses found the band, somewhat improbably, finding commercial success. A combination of active rock radio, which leaned a lot heavier than the early ’90s, MTV, whose Headbangers Ball was able to make metal bands famous, and the natural appeal of the album, made them a favorite with goth kids and metal kids alike. Of course, his Playgirl shoot proved that ladies could objectify men as much as we objectified them, and it probably led to some new female fans the band might not have had before.

The similarly successful October Rust followed in the footsteps of Bloody Kisses, with World Coming Down, Life is Killing Me, and Dead Again, leading them into the 2000s. And while Type O’s metal/doom/goth sound made them stand out among nu-metal, hardcore, industrial, and power metal bands, the band’s sense of humor was what really set them apart. Steele was a large part of that. His sardonic, quick-witted responses in interviews, his looming onstage persona, and the way the band positioned themselves (There was a t-shirt calling them the ‘Drab Four’) was something the usually over-serious metal scene lacked. The band always played a week or so of Halloween shows, and it became an annual tradition to go to the Trocadero in Philly to go. That the shows always ended with the band TPing the crowd brings to mind a venue covered in toilet paper, which seems wasteful in the midst of a pandemic, but served as just another example of how much fun Type O was to see live.

With the band literally just about to sign a new contract, Peter Steele’s passing on April 14th, 2010, came very suddenly. After having drank and used cocaine (not to mention having gone to jail for violating probation as a result) in the past, the 48-year-old allegedly cleaned up and had been sober when he suffered a heart attack, and the lush, gothic, heavy, melodic sound of Type O Negative died along with him.

This is where this story gets personal. On the evening of April 14th, 2010, I’d heard some chatter that Steele had passed. I was in the process of attempting to cover the story for Insider, calling friends of mine that knew him or had worked with him at labels, trying to confirm what I’d hoped was a sick rumor, perhaps started by Steele himself. In the midst of it, I got a call from my brother telling me that my father had also unexpectedly passed. Granted, he was older than Steele, but a quick hospital visit led to outpatient rehabilitation, where he’d been doing fine, but suffered a brain aneurysm. I was sadly able to confirm my dad’s death before I got a concrete confirmation of Steele’s. So while I have the utmost respect for Peter Steele and Type O Negative, and they’re definitely a band I love and followed through their too-brief career, every year when metalheads around the world honor Steele’s death, I’m also paying tribute to someone else.