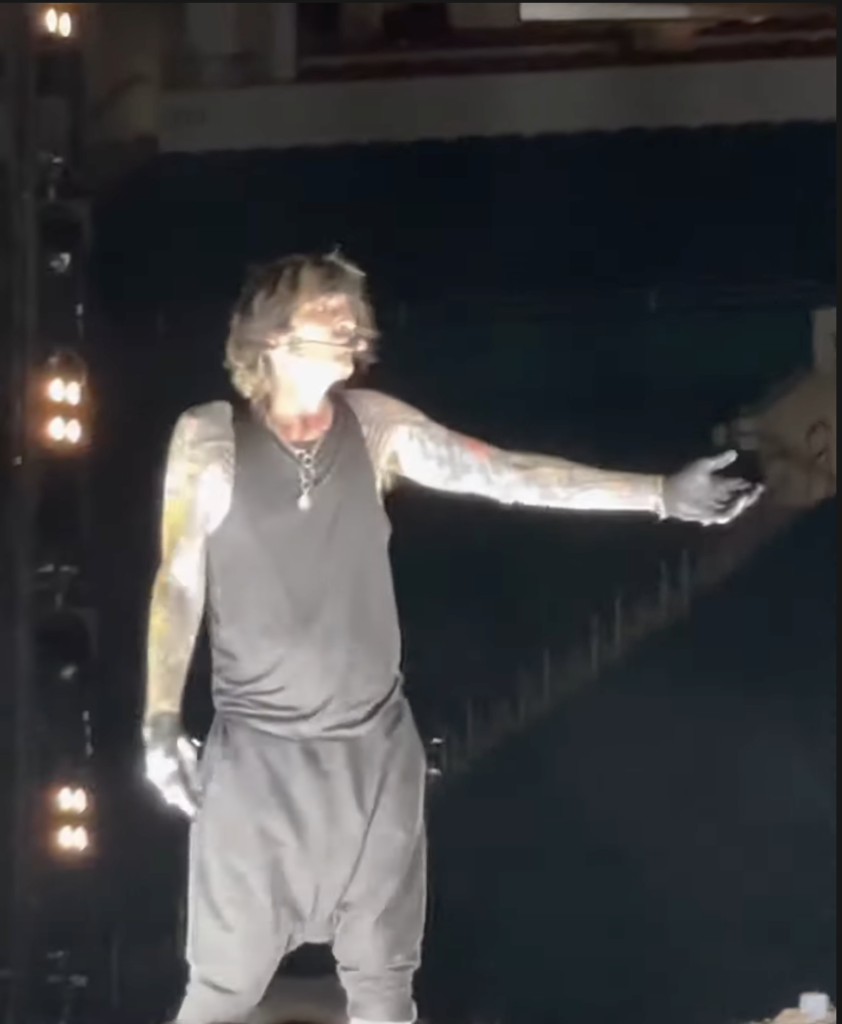 Mötley Crüe’s Tommy Lee sat behind the drums at the start of the band’s concert Saturday night at Hard Rock Stadium in Miami Gardens, Florida.

Against doctor’s orders, the drummer powered through the first thee songs of the set before handing the reins over to another Tommy, Tommy Clufetos, drummer for Ozzy on tour and part of the final Black Sabbath tour.

Nothing was going to stop Lee from performing with his band after a long Covid layoff, even sustaining four broken ribs just a couple of weeks ago.

Lee played “Wild Side”, “Shout At The Devil” and “Too Fast For Love” with his bandmates and then stepped out from behind the drums to address the crowd.

“You guys, you’re not gonna fucking believe this shit. Some of you may know; some of you may not know. For those who don’t know, about — I don’t know — 12, 13 days ago, I broke not one, not two, not three, but four fucking ribs right here [places left hand on his right side]. And I’m fucking, like, ‘Are you fucking kidding me, dude? Fuck!’ We’ve been waiting way too long for this shit, man. My fucking heart is broken — along with the ribs. So the doctor goes, ‘Listen, bro. By the way, no fucking playing.’ I’m, like, ‘Dude, there’s no fucking way. We have a tour in a fucking few days. What the fuck am I gonna do?’ So I’m gonna fucking pop in and out as much as I can. It hurts like a fucking bitch. And my boy Tommy up here, he’s gonna fucking help me out here. And I’ll be back out. I’ll see you guys in a minute. But at the fucking time, at this moment, the show must fucking go on, goddamnit.”

Lee was replaced for the remainder of the set by Clufetos, before briefly returning later in the night to play piano on “Home Sweet Home”.

The setlist for the Miami Gardens concert was as follows:

On Friday, The Crüe’s bassist Nikki Sixx praised Tommy for “beasting” through the first five songs of the band’s set in Atlanta, writing on Twitter:

“The fact that Tommy was told by the doctor to not play with 4 broken ribs & he beasted half our show is a miracle. We are a band and are proud of his strength. He is doing the whole tour and day by day adding more songs. What a fucking animal. Anybody out there ever break ur ribs?”

bringing Mötley Crüe, Poison, Def Leppard, and Joan Jett together, the tour, originally slated for 2020 before being moved to 2021 and then to 2022, is ongoing and will run through September 9, when it concludes in Las Vegas, Nevada.