Earlier this week, after rumors started to gain steam, it was confirmed that Rob Zombie and Marilyn Manson would indeed tour together. In fact, all that wasn’t known about the Twins Of Evil Tour were the dates itself. That, however, has changed.

Late last night, dates for the co-headlining tour were officially announced. And as it turns out, the two will not only be touring the U.S. together this Fall, but Europe as well. Zombie had the following to say about his new Fall plans:

“Finally! Why did the most obvious tour take so long to happen? Who knows? Who cares? It’s happening now. If good taste is the chief enemy of great art, then we should be able to fill the Louvre with this fucking tour. Be prepared for something wicked this way a-coming.”

Manson had the following to add:

“I have sympathy for the Whore of Babylon that gave birth to these twins of evil, and this abomination of a tour. There is no babysitter, and there is no repairing her womb. If Rob Zombie doesn’t fuck you up, then I surely will. Hide all drugs and firearms… I’m coming to town.”

As previously reported, Korn frontman Jonathan Davis will be performing an opening set under his DJ moniker J Devil. Here’s what Davis had to say about his new opening stint:

“I like to think of J Devil as the ‘anti-christ’ of EDM. To play alongside Zombie and Manson is going to be a fucking sinister night all around, and an unbelievable theatrical experience. I can’t wait.”

As of now, it’s unclear who will close each night on the tour (or whether they will alternate slots). However, if the two’s upcoming appearance at Desert Uprising Festival in Phoenix (the tour’s kick off) is any indicator, it would appear that Zombie will have the closing set. Regardless, it’s hard to argue that these two 90’s shock rock kings make a perfect touring package, especially leading up to Halloween (which is when they’ll be playing Dallas).

Dates for both the U.S. and European legs of the Twins Of Evil Tour (with more supposedly to come) can be seen after the jump. 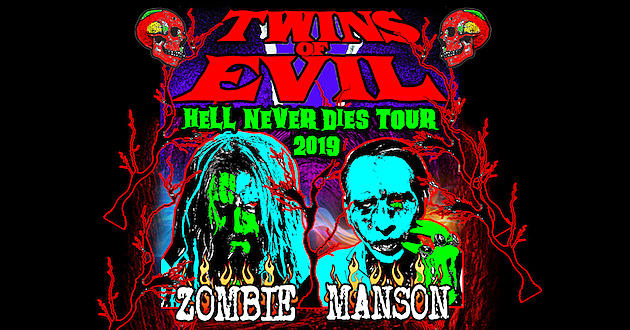