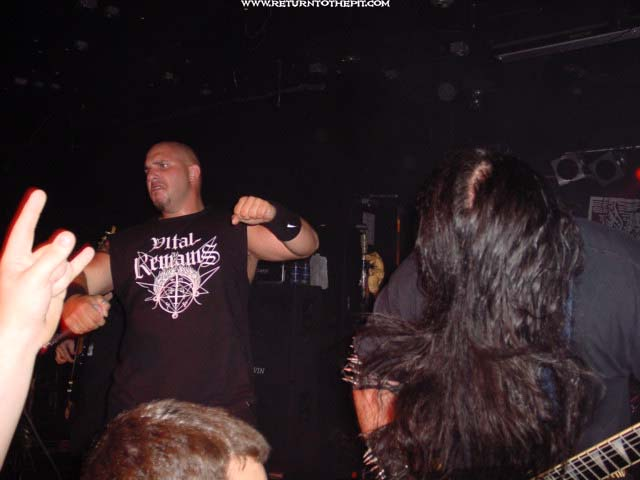 Many of us are still mourning over the loss of Pantera/HellYeah drummer Vinnie Paul. And now, it’s been reported that Jake Raymond, the former Vital Remains touring vocalist has passed away. MetalSucks found a local obituary revealing the-40-year-old died last Monday, June 18th. The obituary doesn’t necessarily mention his cause of death aside from issuing the following:

“Jake’s long struggle with addiction is now over and he has finally found the peace he sought.”

Unfortunately, this marks the third tragic loss in less than a year for Vital Remains. This past Halloween, Scott Willey who was the band’s singer from 2008-2012, died unexpectedly from unknown causes. The first tragedy happened last summer when former touring vocalist, Chris Ross (40), was fatally shot by his brother-in-law.

“I found out late yesterday some very sad news that a old friend and Vital Remains singer passed away. His name was Jake Raymond, and he was a good friend! Some of you might remember Jake was VR’s vocalist back in 2001 before we recorded Dechristianize album. He really love the band and always held us in high regard. Even though i hadn’t spoken or seen Jake in a few years I always hope things were going good for him. I remember the last time I saw him he came out to one of our local shows in Providence and we had fun catching up and talking about the good old days! We laughed a lot that night and I remember he started helping me sell merch and asked if I needed any help? You were always trying to help bro and I wish I could have helped you bro. Thank you for that and everything else you did for me!! I will always remember the good times we had brother! This is really so sad. I’m sick of losing so many friends this year. This makes three Vital Remains singers that passed in the last year. Three brothers I will not forget! Thank you Jake for your friendship and all your help when I needed it! Thank you for all your work with the band!! I wish I could have been there for you more brother, but we kind of took different paths. I hope you are at peace now. Rest easy brother and until we meet again. My Deepest condolences to his family and friends. RIP Jake”

We send our condolences to Raymond’s friends and family during this difficult time.