Ghost provides an evening immersed in the hyperreal. One can look at the Ghost stage and imagine themselves in some type of alternate reality where one comes to worship at the altar of Papa Emeritus in his infernal and nocturnal glory. Over 2,500 members of the flock attended Papa’s ritual in Philadelphia last night at the sold out Fillmore and they clearly received what it was they were seeking.

With all the controversies surrounding Ghost, it’s important to remember one key element to the band…  they’re fun… and they put on a show that doesn’t disappoint time after time, tour after tour. While social media has been buzzing about “new members,”  “old members,” “contracts,” etc., there’s absolutely no denying that Ghost’s performance last night was tight as hell (so to speak) and that this band are masters of their craft.

One of the things I love about Ghost is that they really bring all different types of people together:  young, old (there were even a good number of elementary schoolers in attendance), punks, metalheads, classic rock fans, and even a large group of people who were just curious. I heard a number of people in the lobby and in line mention that they were turned on to this band as a result of their opening slot on the current Iron Maiden tour. Clearly Ghost is branching out and bringing on a wealth of new fans through the tried and true formula of putting out masterful records and then engaging in incessant touring. This was the fourth time I caught them live in the past five years and every one of the their shows on the East Coast has been packed to the rafters.

The set consisted of favorites from of all their records and they did an excellent job getting the crowd incredibly pumped with their most recent smash, “Square Hammer” from the Popestar record (featuring incredible artwork by Zbigniew Bielak). They then launched into fan favorites “From the Pinnacle to the Pit,” “Ritual,” and “Cirice” among others. Part of the demand for Ghost live shows is the fact that there’s no “downtime,” no dedicated “bathroom breaks” that stop the show dead like KISS do when they launch into a track from Psycho Circus. It’s just great song after great song – no filler – no excuses. Response from the capacity crowd was intense and the band clearly drew off that energy, with the nameless ghouls doing a number of jumps and striking some poses to the delight of the masses. The performers really made the most of the massive Fillmore stage.

The stage set up is typical Ghost.  Detailed backgrounds with appropriately decorated risers. As someone who’s not particularly tall, I greatly appreciated the risers that all the band members utilized, especially Papa, who spent much of the performance on one of the higher risers in between the drums and keyboards so that everyone in the vast main floor could get a good view. Even when I stood in the far back of the venue towards the end of the show I was able to see nearly everything, and that goes a long way to enhancing the live music experience for those of us who are vertically challenged.

The sound, per usual, was spot on.  Plenty of really interesting (and fun merch) and just walking around the venue and looking at everyone’s various Ghost-wear was an adventure in itself. In addition, there were people dressed as “Papa’s Nuns” and the like, and various individuals wearing Ghost-like makeup or sporting Ghost henna tattoos.

Ghost is an act that delivers time after time.  For about 90 minutes you can escape the real world and live in the fantasy, ripe with lush guitar tones, nostalgic keyboard solos, and a master of ceremonies you’ll never forget. 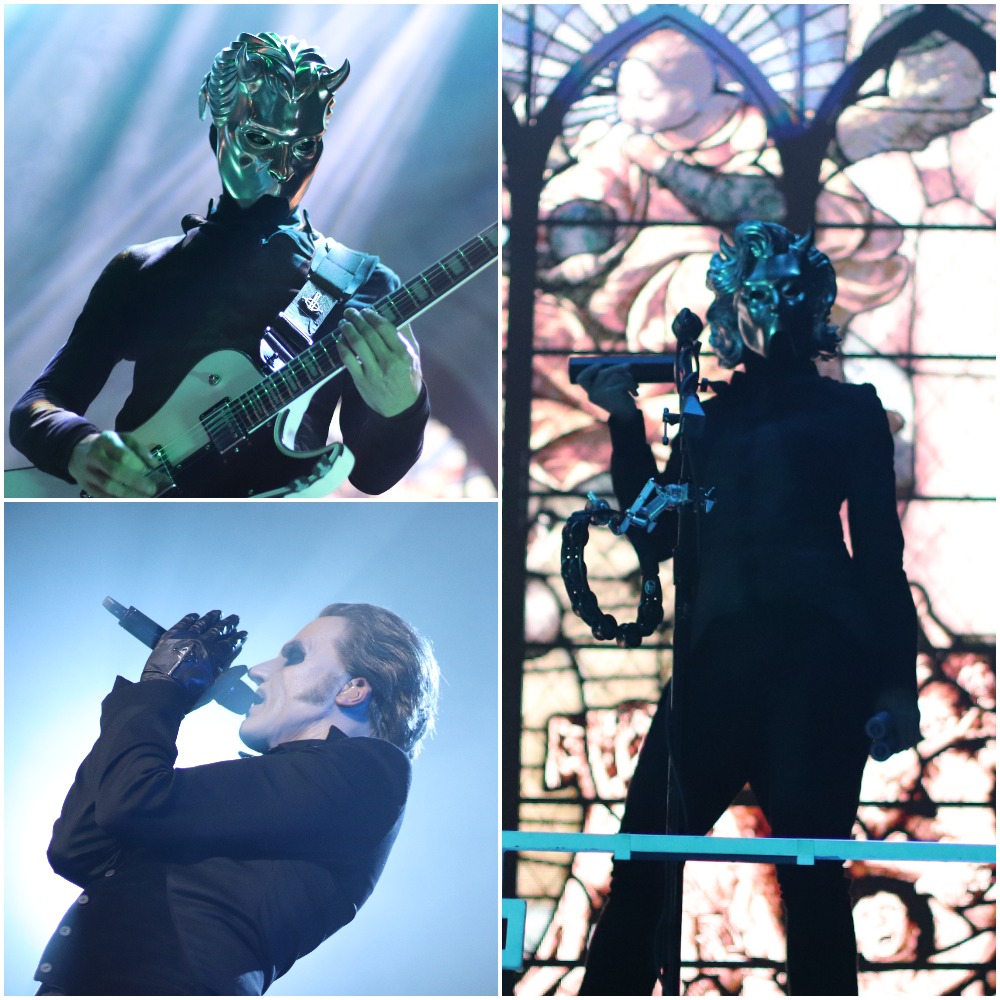