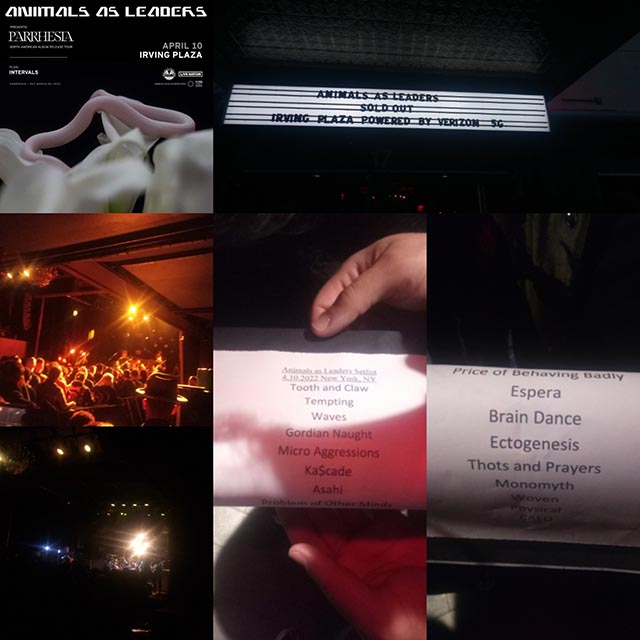 Irving Plaza is a venue in New York where I have witnessed great moments no matter the changes in live music entertainment. As someone who attends shows there, Children of Bodom was the first in 2005. When I walked to 17 Irving Pl on the night of April 10th, 2022, I got to experience another Irving Plaza highlight with Animals as Leaders.

The line curved from the doors to the middle of the next block over as fans were eager to get inside. A sell-out which it’s called, looked like it would be an evening of desolation. Or a night of inspiration for many students of guitar locking their eyes on the hands of Tosin Abasi.

Fixing a guest list problem, I missed most of the direct support for Animals as Leaders, Intervals. I was just glad I didn’t miss their entire set. I have been a fan of instrumental metal music since I first heard Iron Maiden’s Transylvania during my formative years. Intervals got the newcomers involved without the need for vocals.

After Intervals finished, the room became packed. This one guy next to me seemed like he was about to explode. He couldn’t contain waiting around any longer, jumping around and shouting out gibberish. He had a lot of music to look forward to, as did the like-minded fans, guitar players, casual fans, and weekend warriors.

Animals as Leaders glided into Tooth and Claw. From the opening notes they played, it was going to be an excellent evening. Tosin Abasi displayed all kinds of masterclass guitar-playing antics that resulted in two things. They either encouraged those guitar players to get better or deterred them from playing ever again. Tosin’s talents are one of a kind.

The set-list was also impressive, pinpointing songs off the new album that all sounded good while the rest of the set was dedicated to their die-hard fans playing Songs like Tempting Time, The Woven Web, The Brain Dance, Physical Education, and many more.

The whole performance presented an intense vibe felt nowhere else. The band didn’t need hokey lyrics or nonsensical stage banter to fill space. I’m sure Tosin felt that was important. They ended their set with probably their most well-known song CAFO, which brought on intense crowd participation.

It was nice to see people take something valuable away. Maybe it was to become better musicians or to do something different. Or maybe to appreciate that we will never look at an instrumental trio the same way again.

After the concert and a post-show Wendy’s meal, I headed home after a pleasant night at an iconic Manhattan venue.