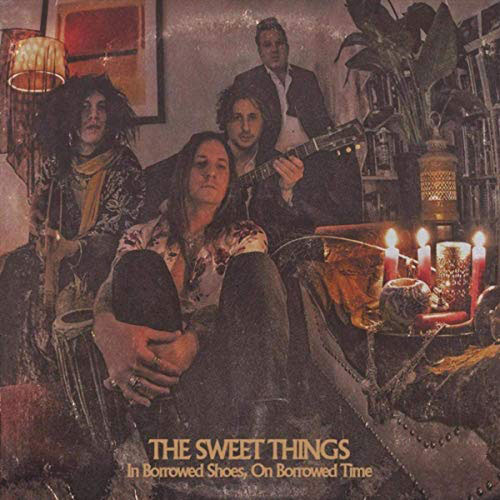 When you think of rock and roll, images of alcohol-fueled nights of debauchery and hard living are the first things to come to mind. Never has that been truer on a rock album than with The Sweet Things’ full-length debut In Borrowed Shoes, On Borrowed Time.

From the moment the blues-rock guitar riff and rolling drums of “Liquor Lightning” come bursting in, you’re transported to the bar and ready to party. That party vibe is carried into “Dead or Worse,” an upbeat jaunt about the dangers of getting blackout drunk. From the Motley Crue-ish “Almost Faded” and “Dr. Crazy Girl” to the anti-drug-fueled “Coke’n” to the rockabilly “Through the Cracks of the City” and “Fix to Kick,” the hard rock party just keeps coming.

When the album does venture to the slower side, the band does a good job of replacing the hard-partying rock with content that packs more of an emotional punch without breaking the album’s general sound and physicality. The wistfulness of “In Borrowed Shoes, On Borrowed Time” is palpable, begging for a shot of whiskey to drown one’s sorrows. “Feed My Dog” is written like a musical will, soberly reflecting on the narrator’s hard-living ways in a way that makes you feel for him.

The Sweet Things make a stand-out first impression with In Borrowed Shoes, On Borrowed Time. There isn’t a moment on the album where you’re not compelled to feel something, whether that’s the urge to get up and dance or to cozy up to the bar and drink. From start to finish, the album combines a heavy dose of alcohol-fueled barnburners with a light dollop of slow-burning emotional thinkers, coexisting while still maintaining the underlying sound that binds them all together. This is rock and roll at its purest.

The Sweet Things In Borrowed Shoes, On Borrowed Time is available now via Wendigo Productions/Spaghetty Town Records and you can order a copy here.