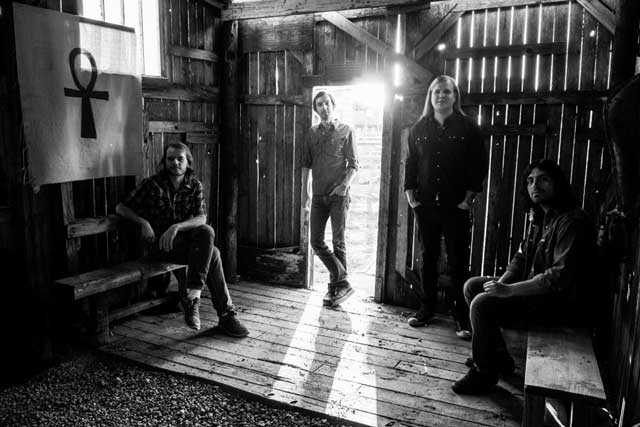 The Sword have returned from their hiatus and have a heap of surprises for their fans. The Austin, TX metallers have announced two career-spanning collections, which will be released simultaneously showcasing their career spanning over fifteen years. On June 5th, the group will release Conquest of Kingdoms, a three-disc vinyl collection of rarities and oddities, as well as Chronology 2006-2018, a three-disc compilation. A digital version will also be available for Conquest of Kingdoms. In addition to the vinyl release, there will be a limited-edition color variant, which will be available on the band’s website.

To celebrate both collections, the group has unleashed a previously unreleased version of “Freya,” which was recorded at Stubbs in Austin, TX in 2011.

Check out the recording below and pre-order Conquest of Kingdoms here and the Chronology set at this location:

Metallica’s Lars Ulrich, Lamb of God’s Mark Morton, and Clutch’s Neil Fallon have contributed to the chronology package liner notes, which you can see a few recollections below:

“The Sword was a band I had been waiting for… a band that I wished I was in… a heavy blues, acid rock, psychedelic, intergalactic riff paradise. In my estimation, The Sword was the perfect blend of Black Sabbath, Blue Cheer, Cream, Jimi Hendrix, Sleep and Clutch… somehow familiar yet incredibly fresh at the same time.”

“The phrase ‘world building’ is usually reserved for science fiction and fantasy. But I think you could apply it to The Sword as well. The lyrics and music capture the spirit of what first attracted me to heavy metal, namely, the escapism. There’s only a handful of bands that do this convincingly, and The Sword is one of them.”

The group’s Bryan Richie comments on the release:

“We’ve got all these exclusive 7”s and a split record or two, that were pressed in 1,000 quantities. Maybe people heard those tracks on a YouTube stream in not really the greatest quality. As the band had gone on hiatus, we had this wealth of material to share including live sets – things that were sitting on my hard drive for years, things that were given to me at shows. It seemed like the right time.”

“The CD package will be more of a career retrospective with selections from each of our albums as well as the rarities and B-sides and things. Sort of a mini box set, you could say. The set will include a booklet with essays and photos, to make it special and extra. Whereas the LP release [Conquest of Kingdoms] is more streamlined, with just the B-side and rarities material. Personally for me, that’s what’s exciting about the releases. A lot of that stuff I never thought would see the light of day but I always thought was really cool and was proud of.”

06) Fire Lances of the Ancient Hyperzephyrians