2018 wasn’t the best for Machine Head. We thought the group were on their way to break up when guitarist Phil Demmel and drummer Dave McClain initially quit. This resulted in the band making an official statement to clarify the changeup didn’t mean the end for Machine Head. After the group had their final shows with McClain and Demmel, it didn’t take much longer to hear another surprise from the Machine Head camp by announcing they were celebrating the 25th anniversary of their debut album, Burn My Eyes. Last year, Machine Head toured across Europe to commemorate their debut and this winter, the band have taken this an-evening-with trek to North America. The tour kicked off on January 16th in Phoenix, AZ and is scheduled to run through February 22nd in Anaheim, CA. Metal Insider contributing photographer Melinda Oswandel was there to capture the experience at the New York City show on February 1st, 2020, at Webster Hall.

The first set included frontman Robb Flynn and bassist Jared MacEachern sharing the stage with guitarist Wacław “Vogg” Kiełtyka (Decapitated) and drummer Matt Alston (Devilment, Eastern Front). It was unusual that the band’s set started at 7 pm where even Flynn commented on their early arrival. Part one of the evening included greatest hits, and since the evening began so early, there was plenty of time to hear songs throughout their catalog, including cover tracks. The second set consisted of original drummer Chris Kontos and guitarist Logan Mader as they performed Burn My Eyes front to back for their 25th-anniversary celebration.

Overall, the sold-out performance made an incredible Saturday evening.

Machine Head shared the following statement from their NYC show:

“New York City!! That was a bona fide SOLD OUT fuckin’ banger! Every once in a while you have one of those special, life affirming shows where something magical happens and this was definitely one of those nights!

We had loud as fuck singalongs, a rocking balcony, huge circle pits and you guys certainly kept the security busy up front with the largest amount of crowdsurfers we’ve seen so far on this leg. A very special shout out to John and everyone who kept him up for one of the most spectacular crowdsurfs we’ve ever seen (swipe for video)!

Such a special night demanded a fitting cover jam section and we busted out “Creeping Death” amongst others.

We can’t begin to say how much this evening meant to us other than to thank every last one of you for a truly magical night!! Fuck yes!!”

Watch the Pro-Shot video below:

“Is There Anybody Out There?”

“None but My Own”

“The Rage to Overcome”

“A Nation on Fire” 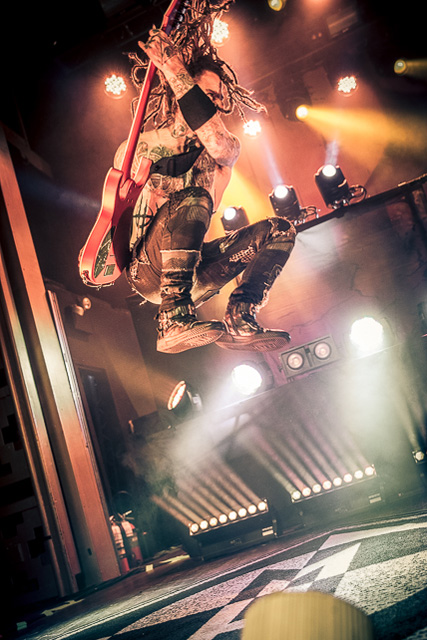 Check out the remaining tour dates at this location.