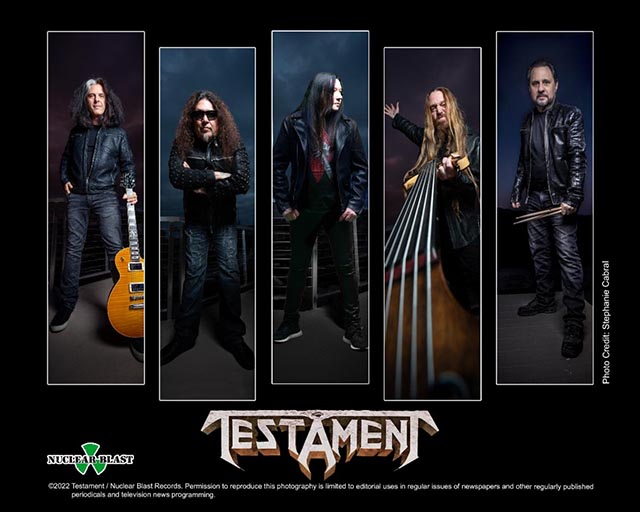 Testament guitarist Eric Peterson has confirmed in an interview with MetalMasterKingdom.com that the band is planning to begin work on a follow-up to 2020’s Titans Of Creation with a 2023 release date.

Peterson on speaking about an upcoming ballad:

“We actually have a ballad that we wrote, we were gonna put it on the last record. We actually recorded some stuff, and it just wasn’t ready. We were listening to it, going, ‘Nah…’ There was a lot of elements that weren’t in there; we kind of threw it together. But this time I think we’ve got something really cool.”

In regard to what the ballad sounds like, Eric said:

“It sounds like something that TESTAMENT would do. The melodies in it are really cool. I’m not trying to say that we’re going in a ballad direction. We’re gonna deliver one of those kind of songs again; we haven’t done that for a while, since 2012’s “Dark Roots Of Earth”. And then there’s a lot of pieces laying around that I’ve recorded over the years that I haven’t put drums to yet. So hopefully I’ll be jamming with [TESTAMENT drummer Dave] Lombardo soon and we’ll put some killer shit together.”

“October 15th is the last show of of ‘The Bay Strikes Back Tour’ with EXODUS, and DEATH ANGEL, so we’ll work on new material right up to Christmas and then right after New Year’s we’ll get right back at it. I know  Eric and Alex (Testament’s guitarists) have been working and jamming together, and I hear there’s an epic song that’s been created. I haven’t heard it yet, but I hear it’s epic. That’s all they’ll say… ‘it’s epic.’ I’m, like, ‘Okay.’ That’s the word they throw at me. But we’ll see.”

When it comes to the musical direction to be heard on the new album, Chuck said:

“I think TESTAMENT will always stay in the vein of TESTAMENT and not follow trends or follow what’s hip today. Even though there’s a lot of great new bands I love and I go, ‘Man, that’s great. I really love it.’ But we can’t change; we want to kind of stay TESTAMENT. I hear it from fans when you talk to ’em. They always say, ‘Thank you for being who you are for so long.’ So we just have to continue that.” 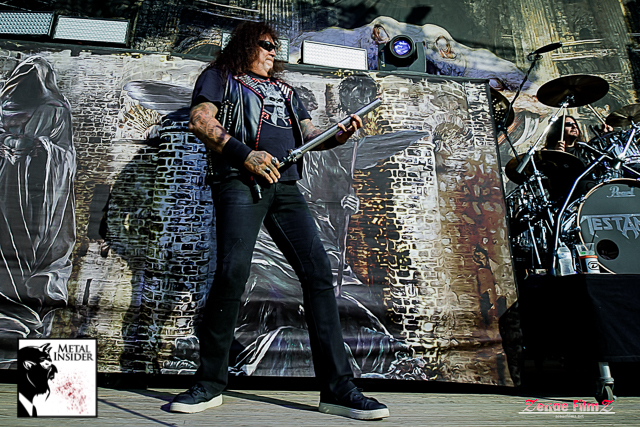